Comments on Hojo Undo from Okinawan Karate Masters | YMAA
Skip to main content
FREE Shipping Order Over $70. (US Only, Conditions apply)    |   Up to 40% Off. Exclusions apply. 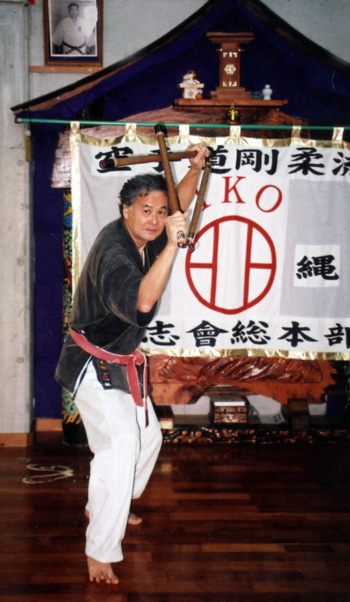 Since I began traveling to Okinawa in 1984, I have been privileged to meet many great karate teachers over the years. Some have had a worldwide following, while others have not, but the majority of them have had something in common—their sincere love for the fighting arts of their homeland and their willingness to share what they know.

It is not possible to detail the many conversations I have had with all of them, but I thought I would include a brief extract from just two of these exchanges to provide an incentive to others to seek out such teachers and perhaps have their own conversations.

Michael Clarke: How important is hojo undo training in karate?

Tetsuhiro Hokama: Well, as you know, in older times masters such as Kanryo Higaonna sensei, and Chojun Miyagi sensei went to China, and there they were training very hard every day. This was the Fuken style of fighting which became our Goju ryu karate when these people came back to Okinawa. While in China, they found out about hojo undo and so this became a very important part of training. Today, some people think that karate is just like any other sport, baseball, basketball, etc., but hojo undo is very special and so this makes karate very different from sport. The way we breathe in and out using these tools, for example, maybe in the sport kind of karate hojo undo is not so important, but for budo karate it is very important. Of course, all sports people want to know “how” their body works. So this is the same, but in Goju ryu we try to stay soft in our body as we breathe in, and become strong when we breathe out, for example in sanchin kata.

We have kata in Goju ryu, but if you don’t train hojo undo too the kata is no good; it looks (feels) very bad! We have sanchin and tensho kata too. These are like the foundation of a house that is maybe five levels high. The foundation is sanchin kata, and hojo undo is the foundation support. Above that we have the kata to form the different levels of the house. Kumite forms the roof, and the outside walls are formed by the kata application. This is how we build a karate house! But, most importantly, we must have strong foundations. This idea of training in Goju ryu is Chojun Miyagi sensei’s idea.

In 1392, thirty-six families from China came to Okinawa and settled in the Kume area. They brought with them the practice of kenpo and also the Bubishi (a book much revered by Okinawan karateka). They had many fighting techniques and training methods that were secret. Mr. Miyagi’s teacher was Kanryo Higaonna, his teacher before going to China as a teenager was Seisho Arakaki, his teacher was master Yabu, and his teacher was Master Hokama. This is the earliest time I can find my family name recorded. I don’t think we are related however. But before Hokama sensei, his teacher was a Chinese descendent from the thirty-six families.

Tetsuhiro Hokama: Yes it is okay, but you have to be careful what they do. Their bodies are still soft and forming so you cannot train like adults do, but they can do their kicking and punching against a soft pad. For them hojo undo involves stretching, jumping, skipping, and things like that. They practice sanchin kata, but again, their training is not like an adult’s. But sanchin is the Goju ryu foundation, so they must learn the style. 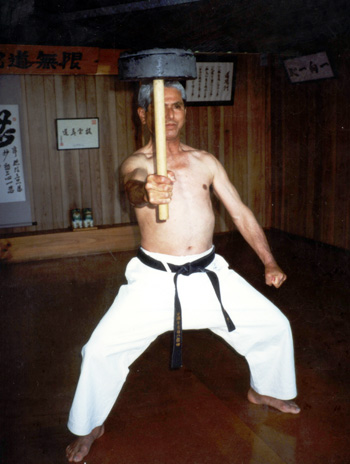 Michael Clarke: Yonamine sensei, can you please talk about your training in hojo undo?

Kosuke Yonamine: Yes, well, I always liked to do this kind of training. We used wood to condition the different parts of the body, like the arms, legs, shins, toes, etc. We hit these parts of the body many times. Now, of course, I am older so I don’t do as much as I once did, but I still train this way. I think it is important to condition your body, not only so you can do karate, but you see, because we are not all born with the same bodies. Some people are naturally big and strong, but some of us are not.

As I started to get better at karate I felt I had to get stronger. So, step-by-step, I increased the conditioning to make myself as strong as I could be. It is important not only to be fit, but to be strong also. If you get hit during training, or in real life, you should be strong enough to take a bit of this so that you can continue. It is no good if you stop because you have been hit. I was taught from the beginning that the human body has some points that are weak, and so I should try to hit these points. There are many such places on the body—all over! When I train in kata I always feel I am hitting these areas; this is important. This is also why some conditioning is necessary for fingers and toes.

Michael Clarke: What kind of special training did you do for your fingers and toes?

Kosuke Yonamine: For my toes, I kicked concrete and wood, and I also kicked the makiwara and sandbags, too. Sometimes these were soft sandbags and makiwara with a lot of “give” in them, but these always led to kicking more solid sandbags and stronger makiwara. As well as these things, I have always used the hard floor to push against with my toes. Many hours spent doing these things have over time given me a stronger body, and certain parts of my body are now very strong. Because I trained properly and did not do stupid things with my body, I still have good health and suffer no ill effects from this kind of training. I have no problems with my hands or my feet, and they are still very strong.