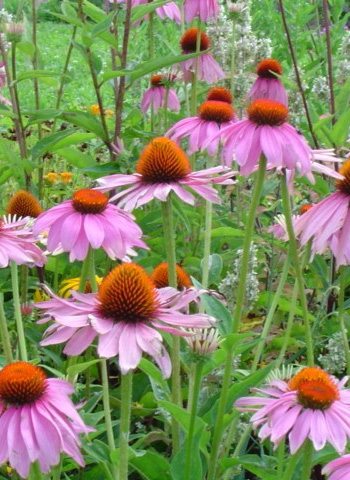 The ability to breathe freely is crucial to the practice of the martial arts. Here are some combinations that can help with breathing problems due to a recent cold or hay fever. Note that a commonly accepted guideline for exercise during a cold or the flu is the “neck up or neck down rule.”

If your symptoms are above the neck and include a runny nose, mild headache, mild cough, you are probably okay for a light workout. If you start having problems breathing, back off. If your symptoms include anything from the neck down, bronchitis, chest cough, fever, body aches, you would do better to rest. Inflammation of the lungs or bronchial passages is aggravated by exercise.

Cold tonics are remedies you take at the first sign of a cold or flu. The idea behind them is to boost the immune system and hopefully shorten the duration of the symptoms.

Echinacea. The earlier you can catch a cold and start treating it with echinacea, the more effective the herb will be.

A commercial blend of echinacea, elderberry, propolis, zinc, and vitamin C is available under the name Sambucol. (Propolis is a resinous substance that honeybees gather from tree buds to seal cracks or open spaces in the hive. It is alleged to have antibiotic properties.). Sambucol has been shown to be effective against influenza viruses in vitro. Small-scale studies show that it reduces the severity of symptoms and shortens the duration of the influenza.

Andrographis. One study shows that a commercial blend of andrographis and eleuthero called Kan Jang Kold Kare) shortened the duration of a cold and decreased post-cold complications. In fact, studies also show that it may work better at taking down a cold than echinacea. Again, the sooner you take andrographis when you suspect a cold is coming on, the better it will work for you. Note that there are two kinds of Kold Kare—one with eleuthero and one without. The Kare-N-Herbs brand, the brand most commonly found in the United States, does not have eleuthero. If you want the eleuthero (and the blend used in the studies mentioned above), you need to get Kan Jang, sometimes called Kold Kare, from the Swedish Herbal Institute. From the perspective of Chinese medicine, andrographis is more appropriate for the flu (with a fever, red eyes, and sore throat) than it is for a cold with lots of congestion and no fever.

General virus tea. Make a decoction of echinacea root, cool it in the refrigerator. Add garlic and dried cayenne pepper (2 parts echinacea, 2 parts garlic, 1 part peppers), and let it cold infuse overnight. The amount you can take is limited by the cayenne. You should not be taking more than 30–60 mg of cayenne per day.

Peppermint tea can also help with the general symptoms of a cold. It will make you feel a bit better, and it may help kill off some of the virus as well.

Inflammation of the Mucous Membranes

Chamomile. After a cold or flu has progressed some and the mucous membranes of the nose are red and inflamed, inhaling chamomile steam can also be helpful. Use a tincture of chamomile (1 ½ tablespoons in a quart of hot water). Heat the water until steaming, add the chamomile tincture, then inhale the steam slowly and deeply for ten minutes, keeping your head and the bowl of water covered with a towel to trap the steam. The effects peak after around a half hour and last for two to three hours. If you feel a bit dizzy while inhaling the steam, uncover your head for a moment. Dizziness is less pronounced with lower doses of chamomile.

Marshmallow. For those times when you’re coughing because your throat is irritated, and your throat is irritated because you’re coughing, try marshmallow. Marshmallow relaxes and soothes the throat while coating the throat to offer a bit of extra protection. If you have the time, a cold infusion of the leaves works best. Otherwise, you can make a decoction of the leaves. Cold infusion of marshmallow is also good for those times when your throat is sore and it hurts to swallow.

For a cough with congestion (with or without swollen throat), try anise. Anise acts as an expectorant, making coughs more productive. It can also decrease swelling. Make an infusion of freshly crushed anise seed to use as a tea or a gargle.

Cough that Keeps You Awake at Night

Combine tinctures of anise with deglycyrrhizinated licorice extract for bronchitis.

Cough with a “twitchy,” Tight Throat

Try a tea made from fennel. Use 1–2 teaspoons of the seeds per cup of water, bruising the seeds lightly before decocting them. Or try gargling or drinking an infusion of thyme.

Use three parts elder to one part other herbs (a total of one part), which could include yarrow, goldenrod, or agrimony. You can make this remedy as either an infusion or tincture. Gargle and spit. 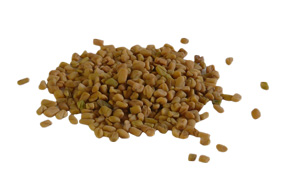 You might try one part powdered sage to two parts honey. Or you can try a tea made of fenugreek. Soak a tablespoon of the seeds in cold water for three hours. Strain and use. If the sore throat is an irritated sore throat, try a cold infusion of slippery elm.

First make an infusion using ½ teaspoon of cayenne chilies to one cup of water. Let the mixture infuse for ten minutes, and then use one tablespoon of this syrup with five drops of myrrh tincture in a cup of water to make a gargle. Cayenne and myrrh can also be used for sore throat.

A Tendency Toward Strep Throat

If you already have the symptoms of strep, go see your doctor. If you tend toward strep and have just gotten a cold and want to avoid further infection this time, one of these might help you fight it off. Note: the fresher the garlic the better. Drink these remedies cool, as heat tends to break down the active compounds. If you want to use a garlic remedy for more than one day, make up a fresh batch each day for maximum potency. Take them at the first sign of a cold.

Garlic wine.Chop or press a few cloves of garlic and cover them with red wine. Let it sit several hours before drinking

Garlic lemonade.Chop or press a few cloves of garlic and cover them with freshly made honey lemonade. Let it sit for several hours before drinking.

Try an inhalation of eucalyptus. Use a standard inhalation method with two drops of the eucalyptus essential oil to a quart of hot water. Because eucalyptus has some virus-fighting properties, it might also help you fight off the cold as well as unplug your sinuses.

For clogged nasal passages unrelieved by blowing your nose, try horseradish. Grate a bit into a hot drink (a cup of tea or some chicken soup). Or you can try some cayenne instead of the horseradish. Both will produce a minor irritation that will cause your nose to run (and hopefully unplug)

Susan Lynn Peterson Ph.D., has made a career of writing about complex topics in a straightforward entertaining way. Building on a lifetime of interest in health, especially alternative healing practices, she has spent three years and thousands of hours investigating the way herbs have been used in various cultures to treat injuries. A Martial Artist's Guide to Western Herbs is her fifth book. Her first three books, published by Tuttle Publishing and Zondervan Publishing House, a … More » 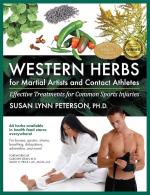