Counter Assault: Surviving Attacks | YMAA
Skip to main content
FREE Shipping Order Over $70. (US Only, Conditions apply)    |   Up to 20% Off. Exclusions apply. 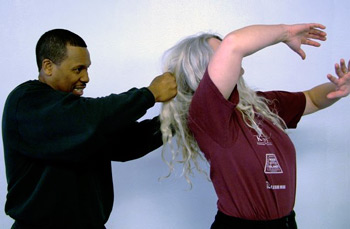 Talking to a friend in a public place, her eyes suddenly focused over my shoulder and went wide. I turned fast, elbow up, spinning and drop-stepping towards the Threat. Didn’t feel the solid contact of a head, but felt an arm brush away and continued.

Talking to a friend in a public place, her eyes suddenly focused over my shoulder and went wide. I turned fast, elbow up, spinning and drop-stepping towards the Threat. Didn’t feel the solid contact of a head, but felt an arm brush away and continued. The drop-step placed me behind the Threat and one hand came up to grab the face and control the spine, the other found a bendable wrist.

And I stopped. A friend playing a trick. Sigh.

Avoidance and de-escalation failed or you never had a chance to use them. You have been attacked. Something just broke over the back of your head or someone has grabbed your hair and yanked you towards a closet. What should you do?

What you need must be fast, effective, uncomplicated, work on most things without modification, easy to train and you must be able to follow it up. Sound simple? Then, after you’ve got it you must train it to reflex speed.

Fast: Ideally, the move would be so efficient that upon your first clue of an incoming attack you could launch and hit first. Because reaction is slower than action this is hard. Not impossible, just hard. At minimum, when trained to reflexive speed, this move should be fast enough that if you are hit you will hurt the Threat before his second attack lands.

It Must Work: That’s almost too obvious to say, but I have seen many moves taught that are not workable in real life or under real attack conditions (e.g., catching knives in the air, somehow getting your elbow between a fist and your face faster than the fist can move or wrist locking a fast flurry of punches).

Simple: If the move is complex; it will be too slow to employ, too hard to train, too easy to over-refine to the point of uselessness. Simple works better in the slop of real combat than complex.

Without modification: The move should work on most common attacks. If you have to change the move to accommodate where or how the attacker stands or whether he attacks with a right or left hand or high or low, it requires a series of decisions that slow you down. Thinking is too slow in a fight. You need an initial move that works on (almost) everything.

Easy to train: You want to put a lot of repetitions into this to make it reflexive. You also want to be able to practice it at full power and speed safely.

You must be able to follow it up: This is a reminder for me. I have a few counter-assault moves that I love, but I am an infighter. If you are not an infighter and use my entries, you will get past the first quarter second with flying colors . . . and then have no idea what to do.

Train to reflex speed: If you have to think, the Threat’s second strike or the third will land. Every strike that gets in, every stab decreases your physical ability to do anything about the next. Time is damage. Damaged is defenseless.

Surviving Attacks from the Rear

One of the most common attacks, particularly on women, is to grab from behind by the face or the hair and yank off-balance backwards. They might be yanked upward or thrown down to the ground. You need to respond quickly and decisively to any unexpected aggressive touch from behind. The response should be the same whether the attack is a grab, a strike, being yanked off-balance, or even a Threat trying to take your weapon if you are armed.

As soon as you feel an unexpected, aggressive touch, you turn toward the point of contact leading with the nearest elbow and drop-step. Use your falling weight on the point of your elbow to deliver the counter-attack. Immediately follow up with strikes, takedowns and spine manipulations, as appropriate, until it is safe to assess the situation.

You turn towards the point of contact because that is your one decisive clue about where the Threat is. The elbow lead can do a lot of damage, a la Dracula’s Cape, but sometimes it winds up wrapping the Threat’s arms. Doesn’t matter, and here is another of the differences between amateurs and professionals in a fight. Amateurs try to make things perfect. Professionals just try to make things better. There are no do-overs so if I wrap the arms or miss entirely, fine. I work from there. And if I happen to catch the guy just right and he goes down, that’s cool too.

Because this already relies on using dropping bodyweight, it is a very small shift to start using being yanked off-balance as an advantage. Combat is a matter of forces and chaos. A poor fighter tries to ignore the forces and the chaos. A good fighter tries to minimize the effects of force vectors and chaos, to fight his own plan. A superior fighter uses the things he can’t control to increase his own effective speed and power. Is getting yanked off-balance a negative if you can use the fall to hit with four times your normal power?

A key safety point to training this technique is keeping one hand up to protect the jaw and ear on the side that you grab your partner. This technique will give you a chance to recover from a strike from behind, a stranglehold (if you act on contact, not waiting for the Threat to get a good grip), weapon grabs and even stabs (the first stab will get in before you notice, remember your goal is to prevent the next eight). However, it is ineffective if the Threat grabs you and rushes you off your feet forward, like a bum’s rush or bear hugs you and rams you into a wall.

The defense I prefer in those cases is very simple, but very difficult to practice safely. If you feel yourself lifted off your feet forward, you latch on to whatever is gripping you and go limp. Suddenly going limp takes a little practice, but even very strong people have trouble lifting a giant rag doll. Suddenly going limp makes you drop, usually in front of the Threat’s moving knees. He will fall.

If you have latched onto his arms, the Threat will be unable to control the fall. A face-plant or landing on the point of the shoulder is likely. I still remember the young man who was thrown with his arms trapped. Despite the soft mats, his clavicle was shattered.

Counter Assault is Less than a Second

The counter-assault stage is a quarter of a second of any fight. In one-way or another, you have been working on your ethical issues since birth. Civilization has been working on legalities since the advent of writing. Criminals have been polishing their skills since they were old enough to take other kids’ milk money. Your ability to avoid, escape, or defuse may take seconds or spread over hours.

The actual assault, when it happens, will begin in an instant and it will be over in a fraction of a second. Whatever you do, it has to be effective and it has to be fast.