Counter Assault: Attack from the Front | YMAA
Skip to main content
FREE Shipping Order Over $70. (US Only, Conditions apply)    |   Up to 40% Off. Exclusions apply. 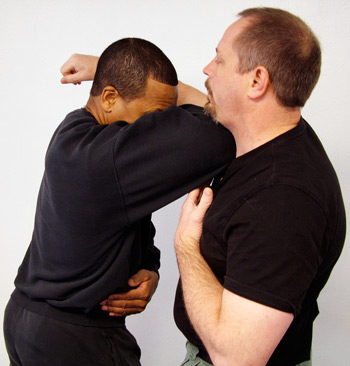 Counter Assault: Attack from the Front

When a threat attacks you, he has a plan and his is counting on your surprise. He is expecting you to freeze in fear and leave him free to do whatever dastardly things he has planned. He expects your own adrenaline to ensure that he wins. An operant conditioned response will kick in before the adrenaline surge that might trigger freeze rather than fight or flight.

When a threat attacks you, he has a plan and his is counting on your surprise. He is expecting you to freeze in fear and leave him free to do whatever dastardly things he has planned. He expects your own adrenaline to ensure that he wins. An operant conditioned response will kick in before the adrenaline surge that might trigger freeze rather than fight or flight. Here are some examples of operative conditioned counter-assaults:

If a weapon or kick is involved you will have to step in with it. I prefer a drop-step, which is essentially a controlled fall. If your strike is properly structured it will transmit the power of your entire falling body weight to the heel of your palm. Most people fall significantly harder than they can punch.

This isn’t my personal preferred technique but it is effective for strikers. Does it better your position? Slightly. If you are a striker the palm-heel prevents your attacker from entering too deeply and the drop-step puts you in range to deliver more strikes.

Does it worsen his position? Absolutely. The thing about getting your head snapped back is that it puts the spine in an awkward position where you can’t really do anything, at least for an instant.

Palm-heel-to-the-face clearly does damage. Delivered with structure, a drop-step and the proper angle: it can really mess up the cervical spine.

Does it protect you? Yes, and this is an important point.

Amateurs fight bodies. They study bodies, they break down bodies and they train to counter technique. Professionals fight minds. Almost everyone chokes when something comes at his or her face. They abort the attack to protect themselves. People will abort a perfectly good punch, baseball bat swing or knife thrust to dodge a paper cup thrown in their face. That defensive flinch is very reliable but it is hard for many people to rely on a purely offensive technique. They want to buy insurance, to put some effort into defense. Just in case.

In the first quarter-second a fast committed single-move offense is better protection than trying to divide your mental and physical resources between offense and defense. I have seen offense consistently protect better than defense in this situation, but I can use nothing but my experience to convince you. Trust your own common sense.

There are two counter-assault techniques that I teach and use for attacks from the front, basically for anything I see coming. One I use naturally when jumped and I have used the other occasionally. I like them. They put me in a good position for very close-range fighting which is my preference, and give me numerous low-damage options which my bosses prefer.

Why two? Damn good question. Thanks for asking. Because there are two common flinch responses for something suddenly flying at your face. Some people duck, turn away, and throw their arm up so that the elbow is roughly between their own face and the Threat. Others, including me, tend to throw both hands up in front of the face palms out. If the technique you train is based on your natural flinch it will be easier to learn.

Both entries use similar footwork. Assume an interview stance (weight evenly balanced, one foot leading so that you have a definite lead side, hands unobtrusively high, perhaps scratching your ear) and turn the lead foot so the toe points slightly inward which protects the groin with minimal movement.

From that stance use the drop-step with whichever foot is closest to the threat. A drop-step starts by suddenly lifting the leg closest to the Threat and falling while launching with the back leg, then catching yourself with the lead foot. Using gravity is faster than stepping or lunging. It requires little power and once practiced to proficiency goes un-telegraphed. By maximizing the use of gravity and body mass, even small people can hit hard.

If the drop-step is used to the front or sides, the rear foot slides up to establish a good fighting stance. If you perform the drop-step to the rear, the same thing happens but is accompanied by a turn so that you are facing the Threat.

In the Dracula’s cape response, at the first visual cue or telegraph of an attack, you counter-attack by burying your face in the crook of your lead elbow and drop-stepping into the threat. Tuck your chin and brace your lead hand on your own opposite shoulder which leaves only a thin slit over the eyes vulnerable. You can wrap your off hand around your body to give added protection to your ribs.

Properly executed, your entire body weight and leg strength focuses on the point of the elbow which will blow through the Threat’s guard or attack and impact, usually on the face if the Threat is short, the sternum if the Threat is tall, or the throat if the Threat is about the same size. On impact, the lead arm can uncoil to control the Threat’s neck or slide to slap the ear, while the opposite hand can strike or come up under the Threat’s arm to the elbow leverage point and raise the elbow and turn the Threat.

You can combine knee strikes with any of these actions. The elbow motion in Dracula’s cape is not a swing or a blow, think of it as a thrust. You are jousting. The elbow point leads with a bones-forward armored rush.

Practicing Dracula’s cape safely requires armor and a kicking shield. A few students with both body mass and good technique can blow through that but the gear will provide sufficient protection in most cases. The student begins by practicing the technique in the air, paying special attention to the structure of the elbow and the drop-step. There should be no preparatory rise before the drop-step; it is a pure falling action. Once that is acceptable, the student pairs with an armored partner with a kicking shield over the partner’s armored chest.

The student will stand at ease or in an interview stance (on-alert but looking relaxed). The partner will then launch an attack-punch, kick or charge (soft weapons are fine if they can hold the shield equally well). The student immediately launches the counter-assault. The force can be considerable. Great care must be taken that the attack cues are realistic and given with intent. You want the student to develop a reflex to defend from an attack, not to cream someone who waves.

The attacks should not be sparring attacks with feints or have any moves to trick the student. A full-blown assault is an onslaught. Feints have no place in it.

Then the student faces three partners spread evenly across his visual field—left flank, center, and right flank. The partners all have armor and kicking shields. One, and only one, will initiate an attack. The student will key on that motion and launch the counter-attack at that Threat immediately. This drill begins training the response to the artificial reflex level.

There is an important training artifact you need to be aware of here. By only practicing the technique, you can inadvertently train the student to stop, to freeze, after the initial counter-assault move. A training artifact is a habit instilled by training that is for the purpose of training, not survival. It is usually a bad habit.

As soon as you are satisfied that the student’s technique is good, set the expectation that he or she should continue fighting until it is safe to escape.

The Spearhead entry is the one that I have found myself using since the first time a boxer tried to take me out. You will see it in many older systems of jujutsu and recognize the bones of it in traditional karate’s augmented block. Tony Blauer, a researcher, teacher, innovator (still loving the high-gear armor, Tony) has made a well-researched, modern version the core of his S.P.E.A.R. system.

At the first visual cue or telegraph of an attack, you counter-attack by throwing both hands forward

so that the lead hand aims just to the side of the Threat’s neck and the back of the rear hand rests with
the fingertips on the middle forearm of the lead hand. Both hands are palm-up. Simultaneously, you
drop step, shortening distance on the Threat. The arm position is similar to the bow of an icebreaker and tends to blow through the Threat’s guard and/or disrupt any strike he is making. Hips and feet must follow the arms, do not lean into the movement. Properly applied, one of your forearms usually
hits the Threat’s carotid triangle. The finishing position leaves the Threat vulnerable to neck manipulations
and knee strikes to the abdomen, thigh, or knee.)

People who are not infighters tend to leave their hips too far away in both moves, which weaken the technique, compromise balance and make follow-up techniques less effective. With the Spearhead, strong people tend to hit at the collarbone and then push the Threat away sacrificing the range advantage of an infighter.

Strength of Dracula’s Cape and the Spearhead

These pose a lot of potential damage to the Threat. Dracula’s cape focuses a huge amount of power on a tiny point of bone. The Spear hits the carotid triangle, one of the better stun points in the body. Both give you the spine for the follow-up which infighters love.

Any counter-assault must work against most things without modification. The same technique spikes right- and left-handed techniques equally. The closing chokes kicks and protects from clubs, bar stools and lumber. There is no guarantee that a knife thrust won’t get in, but the damage may make the Threat abort and hopefully will limit the attack to one thrust, instead of eight.