Developing Fortitude and Fighting Strategies | YMAA
Skip to main content
FREE Shipping Order Over $70. (US Only, Conditions apply)    |   Up to 40% Off. Exclusions apply. 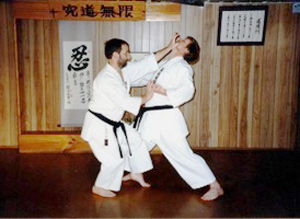 Polishing the spirit (sen ren shin) is the term used to point the student of traditional karate toward the idea of developing fortitude. This is achieved through diligent training conducted frequently over a protracted period of time.

Polishing the spirit (sen ren shin) is the term used to point the student of traditional karate toward the idea of developing fortitude. This is achieved through diligent training conducted frequently over a protracted period of time. Those who insist on looking for shortcuts or a quick fix in karate never cleanse their spirit; the very act of looking for such things ensures your spirit remains tainted. It is to some of the methods used in the polishing of your spirit that I turn now, and in doing so, hopefully, I will illustrate the way karate training (renshu) is merely the outward, physical expression of a deeper and more meaningful internal struggle. I hope to lay siege to the myth that the purpose of karate is purely one of learning how to fight. Indeed, if there is any sense of fighting at all in your training, then it is against the negative aspects of your own ego that you must look in order to find an adversary worth the trouble.

When people think of fighting it would be fair to say they are usually thinking of some kind of clash between two or more individuals, with everyone involved hell bent on inflicting as much damage as possible to each other:karate takes a different view. If a disagreement turns physical and the need to protect yourself becomes necessary, karate’s core message is to control the situation. This is done by dominating the other person, or persons, involved and then bringing the conflict to as speedy a conclusion as possible. The concept of ‘sparring’ plays no role in traditional karate training. Why? Because it encourages you to keep boxing. It gives you a false impression of what a real fight is like and allows you to gain a sense of confidence in your fighting ability that, in reality, could prove fatal. In his excellent book, Meditations on Violence: A Comparison of Martial Arts Training & Real World Violence, (page 30), Rory Miller had this to say regarding strategy training:

Goals differ in different situations. Real violence is a very broad subject and no two encounters are the same. What is a “win” in one situation may not be in the next. The goal is how to define the win in that particular encounter. Sometimes it will reflect your martial arts training. An incapacitating blow may be what you need. But sometimes the goal is to break away or to create enough space to access a weapon or just get enough air to scream for help. If the goal changes, so does everything else. If you have only trained for one goal, (e.g., the submission), you will be hampered when the goal is different.

Miller heads up this section of the book with the following maxim: “Goals dictate strategy. Strategy dictates tactics. Tactics dictate techniques.” Now, while it may look at first glance like Rory’s book has little to do with traditional karate training, I think otherwise.

His attitude toward dealing with conflict is no different to the underlying principles found in the karate of Okinawa: assess the situation as best you can, adopt an appropriate attitude, posture, and distance, and above all, endeavor to dominate the situation as quickly as possible and by all means at your disposal. When you spar you do so governed by guidelines that would, in a real situation, leave you exposed to more danger than you may already be in.

As Rory said, “Goals differ in different situations … If the goal changes, so does everything else.” When you engage in sparring, you change the goal because sparring is not motivated by violence. In karate, the goal is to stop the fight as soon as possible, and to this end, we often hear the term ikken hisatsu—one blow, one kill—being used. If you followed that maxim to the letter, it would of course lead to even more conflict, this time with the law. However, the ikken hisatsu adage is useful in that it reminds you yet again to bring the fight to a close with the minimum of techniques, an impossible goal when engaged in sparring.

With sparring, there is no intention to stop the fight, only a desire to continue ‘boxing’ and to tag your partner in specifically designated, safe areas of the body, such as the chest or stomach. Unless the goal is to break the sternum, in a real fight punches are better placed elsewhere: in the face, on the jaw, to the kidneys, in the bladder, or under the arms on the side of the ribcage. Kicks too would be better placed in soft targets—like the groin, kidneys, spleen, bladder, or against the side of the knees, rather than higher up the torso as practiced in sparring where points are awarded for a “theoretically” successful hit.

There are a number of ways traditional karate training allows you to gain insight into sound fighting strategies that will help you overcome a stronger aggressor. At the risk of sounding somewhat ‘hippie-like’ here, it is better to blend and move with an attack, a little, than try to stand where you are and stop it. Okay, so the obvious needs to be mentioned here; attacks rarely happen in isolation. Unless the first strike was a knock-out blow, no fighter I ever came across on the street threw one punch or one kick and then stopped.