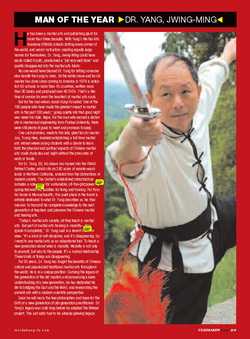 by Dave Cater, Inside Kung Fu

He has been a martial arts and publishing giant for more than three decades. With Yang’s Martial Arts Academy (YMAA) schools dotting every corner of the world, and senior instructors creating equally large names for themselves.

He has been a martial arts and publishing giant for more than three decades. With Yang’s Martial Arts Association (YMAA) schools dotting every corner of the world, and senior instructors creating equally large names for themselves, Dr. Yang, Jwing-Ming could have easily called it quits, proclaimed a “job very well done” and quietly disappeared into the martial arts fabric.

No one would have blamed Dr. Yang for letting someone else handle the kung-fu reins. All the white crane and tai chi master has done since coming to America in 1974 is establish 50 schools in more than 16 countries, written more than 30 books and produced over 40 DVDs. That’s a lifetime of service for even the heartiest of martial arts souls.

But for the man whom Inside Kung-Fu called “one of the 100 people who have made the greatest impact in martial arts in the past 100 years,” going quietly into that good night was never his style. Nope. For the man who earned a doctorate in mechanical engineering from Purdue University, there were still plenty of goals to meet and promises to keep.

One such promise, made to the late, great tai chi master Jou, Tsung-Hwa, involved establishing a full-time martial arts retreat where young students with a desire to learn both the physical and spiritual aspects of Chinese martial arts could study day and night without the pressures of work or family.

For Dr. Yang, 60, his dream has turned into the YMAA Retreat Center, which sits on 240 acres of remote woodlands in Northern California, isolated from the distractions of modern society. The Center’s established infrastructure includes a solar array for sustainable, off-the-grid power: a spring-fed well and facilities for living and training. Far from his home in Massachusetts, this quiet place in the forest is entirely dedicated to what Dr. Yang describes as his final mission: to transmit his complete knowledge to the next generation of teachers and preserve the Chinese martial and healing arts.

“Today’s martial arts society, all they teach is martial arts. But part of martial arts training is morality—they ignore it completely,” Dr. Yang said in a recent IKF interview.

“It’s a kind of self-discipline, and it’s disappearing. So I need to use martial arts as an educational tool. To teach a new generation about what is morality. Morality is not only to yourself, but also to the people. It’s a mutual relationship. These kinds of things are disappearing.”

For 35 years, Dr. Yang has taught the benefits of Chinese culture and popularized traditional martial arts throughout the world. He is in a unique position: Carrying the legacy of the generation of the old masters and possessing a keen understanding of a new generation, he has dedicated his life to bridging the East and the West, and researching the ancient arts with a modern scientific perspective.

Soon he will marry the two philosophies and hope for the birth of a new generation of old-generation practitioners. Dr. Yang’s legacy was solid long before he adopted the Retreat project. This just adds fuel to his already-glowing legacy.