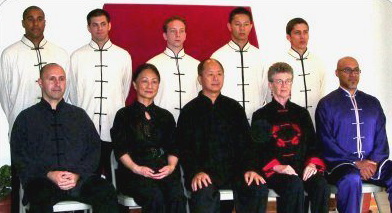 Well, to tell the truth, I had never been interested in studying Physics. The only reason why I got so far as to receive my Ph.D. as a mechanical engineer was to prove to myself that I could learn to deal with things I didn’t enjoy doing, even with the constant pressure from society and relatives around me. To receive a Ph.D. in either Physics or Engineering seemed to be the right choice at that time, even though I knew that deeply in my heart, my real interests were Chinese martial arts and Qigong.

Dr. Yang, originally you studied physics. How did you become occupied with teaching chinese martial arts?
Well, to tell the truth, I had never been interested in studying Physics. The only reason why I got so far as to receive my Ph.D. as a mechanical engineer was to prove to myself that I could learn to deal with things I didn’t enjoy doing, even with the constant pressure from society and relatives around me. To receive a Ph.D. in either Physics or Engineering seemed to be the right choice at that time, even though I knew that deeply in my heart, my real interests were Chinese martial arts and Qigong.
After I received my award as a Ph.D. in Mechanical Engineering from Purdue University, I felt lost and saddened for a few months. However, the pressure of having a family with children forced me to find a secure job to support our living. I worked as an engineer for six years before I woke up and realized that I was not happy with my life. I felt like there was no meaning to my existence. I began to search deeply within my heart and came to the realization that teaching Chinese martial arts and Qigong was what I wanted to pursue. I quit my engineering career in January of 1984 and began to create my future.

How did you get the idea of the ten-year retreat?
I began teaching martial arts in the Western society in 1975, one year after my arrival in the United States, at Purdue University. I taught in their martial arts club as well as within the Theatre Department. Afterwards, I began teaching off to the side, as a hobby, to earn some extra income for my family. It wasn’t until I quit my engineering job that I began to concentrate all my efforts in propagating Chinese martial arts and Qigong. However, the results have been very disappointing.
When I was fifty years old (62 now), after nearly 22 years of teaching in the Western society, I realized that it was almost impossible to preserve the art to the same depth as it was kept in ancient times. I began to see that in order to preserve the arts to the same level as in ancient times I would have to create an environment similar to those times. To do this, I realized that I would have to take a group of dedicated students to a remote mountain area for 10 years of serious training. So, 12 years ago, I began to search for a land to support my pursuit of preserving of the arts.

Which are the main differences compared to the teaching you give in your other schools?
A student in the Center will be able to concentrate their time and effort to feel and grasp the essence of the art instead of just learning the forms. The arts were created from feeling and today’s arts are shallow since the feeling is not as deep and profound as that of ancient times.
Students training in other schools are more for hobby and interest. The students at the Center will be aiming to become professionals and their mission is to preserve the arts to the same standards as ancient times.

Do you already have “indoor students”, for example your sons?
For me, there is no such thing as indoor or outdoor students. I treat my sons and my daughter the same as any other student. As long as anyone has reached the level and is qualified to advance to next level, I will not hesitate to teach him/her.

Are they qualified to transfer all your knowledge?
I don’t know yet. This is only their first commitment. It will take a long time of testing and experiencing to find out. However, I believe that as long as someone has a strong will and commitment, he will be able to reach any goal.

You had planned to accept 15 students for the retreat, now there are only five. Were the other applicants not qualified or did they back out when they realized what they were facing?
Actually, there were at least 15 students selected among 145 interviewed. However, due to lack of funding, I could only afford to take five. If I am able to earn more money from next year’s California seminars, I will recruit another 5. I will know in a month or so of how seminar registration goes. From the income of this summer’s seminars and some sponsorships from outside, I believe I will have enough funding to pay the expenses for five more students this coming year.
How many students I am able to recruit for next year depends heavily on how successful my 2009 seminars will be. The numbers will also depend on how many sponsorships I can find. If anyone who is able to sponsor us, please let us know. The expenses for a student’s entire year are roughly $10,000. Also, next year will be the final recruiting year. The reason for this is that I don’t want to have too many groups at different levels. In addition, I am not a young man anymore. I have only 10 years of energy in pursuing this.

Did any women apply?
Yes. A few.

If so, why didn`t you accept them?
I wanted to see if I could handle boys first. However, now I believe that I already have too much headache with just boys.

Will these five learn everything about Gongfu, Taijiquan, and Qigong that you learned yourself?
Yes. I hope they are able to learn everything I know within 5 to 6 years. After that, I would like to invite other traditional teachers to come and teach them what I don’t know. Naturally, these invitations would also depend on how much funding we will have in the future.

How much time will you spend with them?
For now, I spend almost every day with them. I will have to be there most of the time for the next two years. Once they have learned how to be independent in their learning and practice, I will be able to travel and offer seminars again. Remember, it takes only one day of learning but one year of practice. This is true in becoming proficient in any art. It takes only 10% of learning but 90% of practice.

I have read that you are going to invite other masters to teach the five in later years, of whom are you thinking?
I don’t know yet. I will wait until the time comes.

You have been teaching not only in the US but also abroad, will you have time to continue with that or do those that want to study with you have to come to Boston or California now?
As I mentioned earlier, I might travel again after two years. Also, I believe that it is time to pass on the responsibility to the next generation. Now, my son, Nicholas Yang has taken over the YMAA organization. I have full confidence in him and that he will handle it nicely.
Naturally, interested practitioners are always welcome to participate my seminars both in Boston and in CA Retreat Center. If anyone is interested in participating in the training with those 10 years program student in regular time, he is also welcome.

Apart from the training, do the students also work in the camp?
No. However, everyone must help to clean the center on Saturday afternoon. In addition, they must cook and wash laundry by themselves. The only times we eat together are Saturday and Sunday dinners.

The type of training you offer in the retreat for people of a fairly young age reminds us of entering a monastery. Is it your expectation that the students will dedicate their whole lives to martial arts and keep away from the everyday life of other people?
How many do you think might quit?
That was one of the key questions in the students' interview. I hope they continue to build up their interest and also understand their obligation to pass the arts down to the next generation. I believe at least 60% will endure the 10 years of training.

The retreat camp is quite an ambitious project, how do you get it financed over ten years? Do you have any sponsors? In what other ways will the camp be used during this time?
So far, we have two and half sponsorships that are able to cover two and half student’s expenses. I also offer seminars in summer time at this Retreat Center. Most of the income will be used towards this program. Please visit YMAA on the web for next year’s CA summer seminars ( link to seminars). We have just completed the first season of seminars here, from July to August. It has given us good financial support towards the program. I hope more people will step in to support this nonprofit program financially in the future.

After the ten years, will the students have finished learning?
Of course not. Learning is a lifelong project. If you stop learning, you have lost the meaning of life.

Will you stop teaching then or might there be another ten years retreat?
It depends on if we have enough fund for the future. I hope that we will have enough financial support so the students of this generation will be able to pass the arts to the next generation and also to every corner of the world.

Do you expect your students to open schools and invite you as their master for seminars then?
I will be too old for anything after 10 years. I am 62 now and will be 72 when the program is completed. This is a one time shot for me and is the most precious moment and mission for me.

The project is fascinating and in this form probably unique. Do you expect other martial arts masters to follow your example to preserve their knowledge for future generations?
I surely hope so. Remember, my knowledge is limited compared to the wide scale contents of Chinese martial arts and Qigong. I hope that through my efforts, I am able to inspire other masters to do the same as I am doing. The arts must be saved and preserved before it is too late.