Energy master: Qigong and taiji find passionate teacher in Marshfield’s Roger Whidden | YMAA
Skip to main content
FREE Shipping Order Over $70. (US Only, Conditions apply)    |   Up to 40% Off. Exclusions apply. 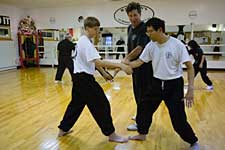 MARSHFIELD, MA - He felt the energy in the ball the first time he stepped onto the mound to throw his first pitch. It was 1965 and the first year and the first game 11-year old Roger Whidden played Little League.

MARSHFIELD, Mass. - He felt the energy in the ball the first time he stepped onto the mound to throw his first pitch. It was 1965 and the first year and the first game 11-year old Roger Whidden played Little League.

‘‘I was the big fat kid who walked with a limp playing his obligatory two innings in right field,’’ he said.

He always remembered the feel of the ball, the energy that emanated from it - that operative word, energy. Now, 40 years later that energy continues to pour out as students witness the slow and precise way Whidden demonstrates the moving meditation of the ancient Chinese healing method known as qigong and the mastery of the martial art taiji quan, also called tai chi.

With the gentle push of his hands and the intentional breathing - from deep within his abdomen, he brings the vital life force energy inside the confines of Whidden’s School of Fitness in Marshfield he calls his ‘‘sacred space of learning’’ - known in Chinese as Wu Tao Quan - or more affectionately dubbed ‘‘ZaZenZone.’’

Whidden and his wife, Mary, opened the Marshfield studio nine years ago and offer oriental therapy sessions including acupuncture, shiatsu (acupressure), reiki, yoga, taiji, karate and meditation - and qigong, the center of all of the methodologies.

‘‘Sensing the life energy and cultivating the love force is the common thread in all of our classes and services,’’ Whidden said.

The confidence and authority he so naturally exudes now was not apparent as a young boy lumbering across a Little League ball field. Whidden believes, as do old world cultures, that a child or young adult who had the most difficult circumstances would often become the most motivated student - one who had to travel the furthest to reach his or her destiny.

His journey began as an overweight kid who was prone to illness. A lawn mower blade chopped off his toes when he was 6; and as a teenager, he sustained several sports injuries. Then, when Whidden was 26, he lost his 24-year-old brother. But he now sees those traumas and hardships as a ‘‘gift.’’

‘‘It taught me to open up to sensing and attending to the energy I needed to turn to the time tested arts of qigong and taiji and to fully develop my own healing process.

Whidden holds a bachelor of science in exercise physiology and a master’s in both education and counseling, and has spent most of his adult life practicing and teaching energy work. He knew from the second grade he wanted to teach. But not until he took his first martial arts class as a teenager did he realize where it would lead him. He taught his first martial arts class at 21 and five years later began his life long path as a master in taiji and certified qigong instructor.

At 35, Whidden trained with world renowned martial arts grandmaster Yang, Jwing-Ming at Yang’s Martial Arts Association in Jamaica Plain. Yang is considered one of the foremost authorities on qigong and taiji. Whidden is the only student in Yang’s international organization to reach the final test for mastery in taiji. But, as Whidden humbly states, ‘‘I failed many more tests than anyone.’’

‘‘Roger is one of the highest moral students, always humble and showed respect from his heart,’’ Yang said.

David Silver, a qigong instructor who practices and teaches throughout Cape Cod, believes Whidden is one of the few individuals in the area who has gone through the traditional style training with a Chinese master to the degree he was conferred the title of taiji master.

‘‘He stands out amongst members of the healing community,’’ Silver said.

Whidden’s students range from ages 16 to 89. Harriet Brannum of Marshfield was 80 when she took her first qigong/taiji class two years ago.

She was coping with the death of her husband, former Boston Celtics player Bob Brannum, when her son pushed her into taking a class after he saw how it helped a friend go through a similar circumstance.

‘‘He signed me up without asking my permission,’’ said a now grateful Brannum, who says not only does she feel better physically and emotionally but believes the classes have helped her be more steady on her feet. Dorothea Dowd, who turns 89 in November, remembers watching Whidden give a class at the Marshfield Senior Center and figured: ‘‘I could do that.’’

She’s been doing just that for the past nine years, and goes to class three times a week.

While she credits her longevity to good genes, she believes the classes have helped add years to her life.

Ian Dashner started when he was 17. Dashner beat the odds when Whidden first thought he would be the least likely candidate for him to mentor - but, as Whidden said, ‘‘he had the highest need.’’

The studio was new and Dashner said it was ‘‘absolute chance’’ that he walked in.

‘‘I was bright but misguided,’’ Dashner said. ‘‘I thought I was a rock star. A typical teen taking a lot of risks. The hole I dug myself in was not without a lot of suffering. I wanted to get out and a part of me knew I had to.’’

So began karate lessons, which led to teaching a class himself.

‘‘It made me feel good,’’ Dashner said. ‘‘It was a true learning environment and self-improvement.’’

Dashner, now 25 and certified as an English teacher, continues to teach kids karate and participates in Whidden’s qigong class. ‘‘Qigong is a very important practice for martial arts training,’’ Dashner said. ‘‘It’s a way to pay attention to how our organism works.’’

Most of Whidden’s students would not care whether he has achieved master status in his healing practice but instead feel they are drawn to his spirit, his love of life.

Qigong is a component of traditional Chinese medicine that combines movement, meditation and controlled breathing, according to the National Center for Complementary and Alternative Medicine.

The Qigong Institute defines the word qigong (pronounced ‘‘chee gong’’) as a combination of two ideas: ‘‘qi’’ means air, breath of life or vital energy of the body; ‘‘gong’’ means the skill of working with, or cultivating, self-discipline and achievement.

The art of Qigong consists primarily of mediation, relaxation, physical movement, mind-body integration and breathing exercises. The intent is to improve blood flow and the flow of qi.

Practitioners of Qigong develop an awareness of Qi sensations, or energy, in their body and use their mind to guide the Qi. When the practitioners achieve a sufficient skill level (master), they can direct or emit external qi for the purpose of healing others.

‘‘Tai chi is the most well-known and popular moving form of qigong,’’ said Tom Rogers, vice president of the Qigong Institute. Qigong provides the ‘‘energetic foundation of tai chi. The main differences between tai chi and qigong involve the form, how the energy is manipulated, the posture and whether the practice is done alone.’’