Excerpt from DUKKHA—The Suffering, A Sam Reeves Martial Arts Thriller | YMAA
Skip to main content
FREE Shipping Order Over $70. (US Only, Conditions apply)    |   Up to 40% Off. Exclusions apply. 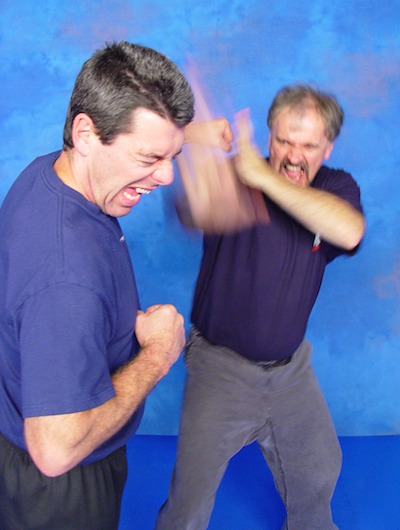 The following is an excerpt from Dukkha—The Suffering.  Sam Reeves is a 34-year-old martial instructor, with a fifteen-year record as a good police officer.   For the first time Sam is forced to take a life, struggles to recuperate psychologically, and then within days he is forced to fire his weapon again.  The week that follows the second killings, he meets a man who claims to be his father who supposedly died in Vietnam. This man is a phenomenal martial artist, who is here for a daughter’s graduation from a local university.  With a series of interlocked events of violence: a revenge seeking uncle of the dead child, the destruction of his martial arts school, his feelings for Mai, his newly found father’s connection to some lethal Vietnamese outlaws, Sam’s life spiral’s into a dreadful direction.

“Look,” Mai mouths, pointing toward the far wall where light from the door window has formed a warped rectangle. Within it, two shadows—head shapes—bob up and down several times, then stay up. Soft voices speaking Vietnamese. I don’t know what they’re saying but Mai straightens a little higher, her hands fisted. I’m coiled, too, ready to launch.

The door opens outward a few inches. Mai rams her shoulder into it at about waist height near the handle as I slap my palms on each side of the window. It’s a heavy door, but our combined weight slams it into someone who emits a startled yelp.

Through the window, I see Toothless Man stumble backwards a step or two before he sprawls hard onto his back. I hope the door smashed into his chin. Tiger Woman, I assume, either fell beneath the window or avoided the door with a fast sidestep to one side or the other.

The door slams back into us, hitting my foot and Mai’s shoulder, knocking her off balance. As quick as a blink, Tiger Woman snakes around the small opening and lunges into Mai with a double-palm push that sends her back against the wall. She follows with a series of furious claws that Mai avoids with some incredibly fast bobbing and weaving.

I start to grab the wild woman from behind, but movement out of the corner of my eye draws my attention toward the door window. Out on the skywalk, Toothless Man is up and charging toward the now-closed door. I turn the handle…wait…wait, and then push it hard into him again. He’s smarter than he looks because he sidesteps to the right, bracing himself against the skywalk railing.

He grabs the edge of the door, probably to whip it back into me, but having had enough door-fu fighting I lunge through the opening and whip-slap his bandaged chin, bringing forth another yelp and a look of disbelief that I would hit him there again. He tries to back away, but I’m quick with a penetrating cross punch into his chest plate that sends him against the cement railing. He makes a quick, worried glance toward the pavement three stories down. He looks back at me, then at his chest as he brushes madly at what I know is a deep, penetrating pain.

Sounds of a struggle behind me. Mai and Tiger Woman are thrashing about in the entry, the automatic door bumping against them over and over.  I sense more than hear Toothless Man. I turn toward him, instinctively lifting both of my forearms to shield my face. Good thing because a fist slams my left arm, sending a stab of pain all the way into my shoulder. He follows with a front kick to my chest, a highly trained one that I barely manage to avoid with a back shuffle. His next front kick is aimed at my groin; I check it with a raised shin. That hurt, but not the same as catching his shoe in my happy place. Avoiding these trained blows without the protective equipment we wear in class is no picnic.

The ambulance is closer now, its screaming siren deafening as it reverberates off the cavernous buildings.

He kicks again. At least he’s not scratching me like a big cat. This one comes in fast but a tad sloppy. I block it with my forearm and simultaneously slam my shin into his groin. He bends over quickly, uttering something in Vietnamese, probably “ma-ma.” I grab a two-fisted wad of his big, white pompadour and swing him in a half circle, releasing him to stumble and flail his arms for balance. He doesn’t find it and falls hard onto his stomach. Maybe that will take the fight out of him.

The ambulance passes below us and finally cuts that damn ear-bleeding siren. It hangs a right at the end of the Science Building, and then disappears.

Toothless Man rolls over onto his back and kicks up into a standing fighting stance. What the hell? Why doesn’t this bozo stay down? He smiles, all lips and one tooth, like he’s showing me why he’s going to dispense some dukkha on me. Been a lot of that going on lately. Time for Lesson Thirteen, the one I showed that big bully who came into my school a week ago—has it only been a week ago? No pulling the punches this time, though.

I hit him twice in the chest, the same spot I hit earlier, then smack two palms into his chin, a straight punch to his throat, another shin kick to his cookies, an instep kick to femoral artery, one to his knee, an elbow into his snot box, a b*tch slap to the ear, a knee-ram to his inner thigh, followed by another to his already crumbling cookies. I stomp the top of his foot and when he bends forward I meet his chin with my elbow. A hard whip-slap across his mouth finishes the set. That might have been fifteen hits; I lost count. He would have gone down sooner but my last few blows kept him from falling.

He does now. First onto his butt, as if he were resting on the skywalk on a windy day, and then over onto his side, moaning and writhing. He curls into a tight fetal position, probably because he doesn’t know which hurt to hold. His remaining tooth drops out onto the cement.

Something hits the back of my head, sending me stumbling forward to trip over Toothless Man and land on my all fours on his other side, facing away from what hit me. Over my shoulder, a glaring Tiger Woman bounds over her fallen comrade. I throw a back kick, but she stops on a dime inches short of getting hit. Behind her, Mai leans against the skywalk wall, holding the side of her head. She looks stunned.

Tiger Woman stands motionless, eyeing me as I get to my feet. Is she allowing me to get up? A trickle of blood curls out of her nose and that large, red abrasion on her forehead looks painful. She favors her left leg.

“Did you shoot those people?” I ask, not expecting an answer.

Her eyes penetrate mine with hatred. Anger I understand, but such intense hatred?

“The old Caucasian man got her,” she says, spitting out “Caucasian.” Okay, she doesn’t like white people. Wait. Samuel found the shooter? She said, “her.” The one I fought at the massage parlor?

“The old Caucasian f*ck blinded her. He did not have the decency to take her life, to give her a warrior’s death.”

Man, this nut job’s been watching too many samurai movies.

“But he did not end her life,” Tiger Woman spits. “He wanted her to live. And suffer.”

“How did he blindside her? How—”

“Blinded her,” she spits, her body shimmying with rage. “He ripped her eyes from her face.”

“She is my…friend,” she says, her lips trembling.

Friend, I bet. That’s lover’s pain she’s got going on there.

She takes a single step toward me. “After I kill you and your whore, I will personally see that he dies with great pain. I will tell Do Trieu—”

“Where is your boss?”

She smiles. “How do you like your school now?”

“Who, me?” she says mockingly, touching her chest with her fingers.

The wind has been quiet for a few minutes or maybe I was too busy to notice. Either way, a strong gust forces both of us to brace ourselves. Then Tiger Woman flows smoothly into the same cat stance she and her cohorts assumed just before they attacked us in the massage parlor: feet staggered, the ball of her front foot lightly touching the ground, hands formed into claws. I’m betting Tiger Woman is their teacher.

Behind her, Mai still leans against the wall, her hand cupping her ear.

Incongruously, my mind flashes to something I saw on the Animal Planet about great cats. Tigers like to attack their prey by latching onto its neck, allowing them to bring down much larger animals, even water buffalo that weigh six times more than they do. The scratch across the front of my neck suddenly stings, giving authority to that bit of trivia.

Tiger Woman’s eyes, narrowed to mere slits, watch me. Another strong gust fans out her hair, but her eyes never waver. I step toward her, stopping just outside of her kicking range. To reach me, she has to cross the space between us, and to do that she must shift her weight off her back leg, which she can’t do without telegraphing.

A tiger attacks a weaker prey faster than one it respects. With the latter, it watches and waits until the right moment. Thank you, Animal Planet. Well, I’m not going to let her choose that moment.