Facing Violence: The Unconscious Stuff-Finding Your Glitches | YMAA
Skip to main content
FREE Shipping Order Over $70. (US Only, Conditions apply)    |   Up to 40% Off. Exclusions apply. 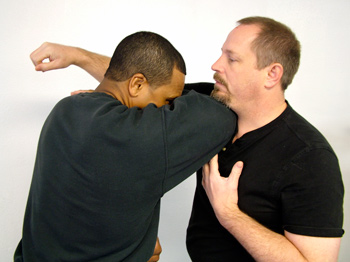 In my own experience, almost everyone hesitates before doing a dangerous or uncomfortable thing. Whether jumping out of an airplane or diving into cold water or singing karaoke in public, very few people can just go for it without hesitation the first time.

In my own experience, almost everyone hesitates before doing a dangerous or uncomfortable thing. Whether jumping out of an airplane or diving into cold water or singing karaoke in public, very few people can just go for it without hesitation the first time.

This is troubling, because I can guarantee that if you are about to get into a fight it will be unpleasant and uncomfortable and frightening. Even more so if you have never done it before. That’s a recipe for hesitation. If you are attacked, every second of hesitation is a second of damage. The longer the hesitation lasts the more damage you take the less able you become to do anything effective when and if you do act

Analyze Your Hesitations Before Fighting

First and foremost you must practice noticing your own hesitations, no matter how minor. You WILL have a tendency to rationalize them, to say, “That wasn’t a hesitation that was just a stutter.” It’s the same. This is deep stuff, some of it going to the very core of your identity. You will subconsciously throw up resistance to anything that threatens your identity—even new, good information. Even growth.

Notice when you hesitate. Ideally, you will have friends and coaches watching for the same things. This is something that I, as a self-defense instructor, specialize in catching—not just the big, overt hesitations but the narrowing eyes that come with an unwelcome thought or the quicker breathing when trying to deny something unpleasant. Look for those signs in yourself . . . and do not rationalize them.

One example that will be familiar to most martial artists: two students practicing at light or no contact and one accidentally hits the other in the face. Even with a light touch, both of their eyes go wide, both take a step back, hands go up and the apologies start to spew.

Does this make any sense at all? Two people studying martial arts (arts dedicated to Mars, the god of war) specifically in a class where one of the seeming goals is to learn how to hit people . . . and there is an immediate, visceral and almost universal reaction to face contact.

The glitch here comes from one of our greatest social taboos: adults do not touch other adults on the head. It is okay to pat a child on the head, or to touch a lover’s face. That’s a short list. To touch another adult on the head is extremely insulting, a sign of great intimacy or great domination. It is, in normal situations, “simply not done.”

That’s a problem, especially if what you have learned for self-defense involves hitting people in the face.

You find these glitches and you get past them most effectively by repeated exposure. At a minimum level, get used to face contact, and taking hits. Some go much farther and there is something feral and dangerous about the person who has experienced enough contact that getting tagged in the face means the training is going to be fun today.

Face contact is an obvious, easy-to-see glitch that almost everyone has. I don’t know where the rest of your glitches are. I don’t know which of my own glitches I have yet to discover. That’s just the way it is. You can’t truly know your limits, physically or emotionally, until you’ve reached them. Go to your limits enough, however, and they move.

There is one other exercise I would like to suggest. If you know or can get to know someone who raises livestock, slaughter an animal.

It may sound horrible, and that is the point. Hunting is not the same: you are the predator and using a bow or a rifle, the kill is at a distance. Slaughtering using a knife (I have done it using a sword) is killing, close and personal and messy. You will feel and see the life leave the animal’s body and eyes. It is a little piece of something you might experience if you ever have to defend yourself. Killing an animal will not have the same emotional weight as killing a person, but you might be shocked by the impact it has on you. That’s good. Consider it a vaccination, a slight bit of dealing with the glitch so that you will be strong enough to handle it if or when the real thing comes along.

Through the Looking Glass—Life’s Glitches

Glitches are not new to you. You have dealt all your life with learning to do things that weren’t easy for you; doing things that made you nervous or queasy; overcoming imaginary limitations. From the third-grader who decides that she can’t learn cursive, to the person who learned to drive even though they swore weren’t mechanically inclined. In your life you have faced a lot of glitches and either gotten over them or decided to live with them.

The glitches in a self-defense situation will be qualitatively different because of the stakes, the time, and inexperience.

The grade school student who decides she can’t do fractions is at most risking a bad grade or being teased by her friends or chastised by her parents. The college student who chokes on a test may be risking a career. The person who chokes in a sudden attack will cross the line from survivor to victim. The stakes are high: life, health, and even identity.

If you started out like many baby-boomers, saying, “I’m not computer savvy,” you have had years to get over it. Plenty of time to learn the basics and even develop a little skill, no matter how confused you were the first time you heard the word DOS (if you don’t know what that is, ask your parents). In a sudden attack, you will have little or no time to work out your glitches, your ethical issues, your capacities. Whatever time it takes will cost you in damage. That is why it is imperative to work out all you can well in advance of any attack.

Lastly, very few people have extensive experience with violence. Two shoot-outs may total fewer than thirty seconds of experience. Hundreds of brawls barely means a few hours of experience, most of that jacked-up on adrenaline. And what you know from your peaceful world does not apply in the world of violence.

You have been raised with specific attitudes, beliefs, and tactics to handle confrontation. They have centered on dealing with playground and possibly corporate bullies, dinner table arguments with family, and dominance games at work. That is conflict in the civilized world and you have tactics for that. The world of violence where one person puts hands or weapons on another to cause harm is not typically a part of that world.

The beliefs and attitudes that prevent normal people from physically attacking are not present in the world of violence, so why would you think the tactics that work in the boardroom would be successful here?

Our normal defensive strategies and skills for dealing with conflict may be one of the very factors that work against us in a fight. These skills have been honed over a lifetime and they are efficient and well-practiced and trusted, and they are keyed to an environment and a specific society.

For most women, for most people, these defenses are social. They are ways of avoiding confrontation, not ways to resolve violence. Ignoring. Appeasement. Flattery. Self-deprecation. “I’m on your side”—teaming.

When the environment changes from a social situation where conflict is pending to a violent or predatory situation where the battle is on, every single one of these sets the victim up for failure; more clearly labels the victim as a victim. Possibly worse, when it is all over and the bruises have healed, these failed strategies will be remembered as cowardice or compliance, and compound the survivor guilt until, tragically, the victim may even convince herself that she deserved or wanted the attack.

The very unfamiliarity of violence can be one of the biggest glitches of all.

I tell you now, the dark side of the looking glass is one of the environments you have evolved to deal with. It doesn’t have to be a glitch. You do have to give yourself permission to quit being a nice person and start being an effective animal.