Fight, Flight or Freeze: Trained and Untrained Responses | YMAA
Skip to main content
FREE Shipping Order Over $70. (US Only, Conditions apply)    |   Up to 40% Off. Exclusions apply. 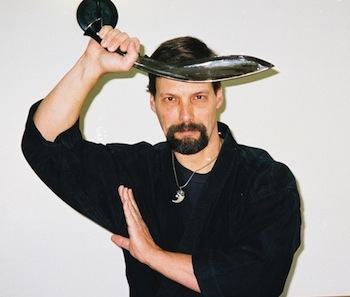 School is out for the summer and it is a normal day, like any other. The sun is shinning, birds are singing in the trees and you’re working part time at the local grocery store, bagging groceries to pay tuition.

School is out for the summer and it is a normal day, like any other. The sun is shinning, birds are singing in the trees and you’re working part time at the local grocery store, bagging groceries to pay tuition. As you carefully place a carton of eggs into the bottom of a brown paper bag your mind drifts back to last night’s karate class. “Kata, kata, kata and more kata, but at least I passed my black-belt test,” you think.

A loud crash brings your attention back to the present moment and in the adjacent checkout line you watch a small-framed man deliberately turn over a shopping cart and at the top of his lungs yell, “I ain’t paying that amount. It’s too much I tell you, too much.” People begin whispering and you feel the need to do something like take him to the ground, throw a roundhouse kick to his head or at least restrain him in a wrist lock, but you can’t. Your body has turned to stone, there’s a slight trembling in your legs and your mouth has become dry as cotton. Thoughts flood your mind and the urge to run grows stronger, yet simultaneously you feel an overwhelming sensation to act. “What should I do? What should I do?” You wonder.

The man turns over another shopping cart, time moves in slow motion and your slight tremble has become an uncontrollable shake and just when chaos reigns you see the bagger everyone calls Pops walk over and address the man in a calm, leisurely voice. “What’s Pops doing?” You think. “He’s a retired cop and at least 60, he’ll get killed.” Pops, however, continues addressing the man in a reassuring tone and when two sheriff’s deputies enter the store, Pops nonchalantly motions with his eyes and they walk up behind the man and handcuff him.

After the man has been taken to jail you try understanding what took place, but haven’t the faintest idea why you reacted the way you did. Nor can you explain the sudden fatigue that has overcome you and why the desire to go home and fall asleep is so strong. You continue bagging groceries and from the corner of your eye you notice Pops who is smiling and carrying on without a care in the world. “How can he be so cool?” You wonder.

When humans perceive danger a physiological response triggered by the sympathetic nervous system occurs that tells us whether we should fight the threat, run from it or else play dead. Commonly known as fight, flight or freeze, soldiers in Afghanistan experience this syndrome today just as it was by the Ancient Greeks 2000 years ago. Dating back to the Paleolithic era fight, flight or freeze is a survival mechanism passed from generation to generation and is one of the most common, yet least understood behaviors of the human race.

When danger is perceived via the senses (sight, sound, touch, smell, hear, taste) a three-step process occurs. First there is the sign of danger, the point in time when something indicates there is a clear and present threat to your safety. For instance, you’re hiking in the woods and a grizzly bear suddenly appears out of nowhere. That is a danger sign.

Next is the signifier stage, the instance when your brain recognizes the danger. Or in layman’s terms you see the bear (sign) then instantly realize it is a bear and that you are in danger. This is when adrenaline floods your body, endorphins—which serve as natural pain killers—are released, blood pressure increases, muscles tense and your breathing grows faster and more shallow.

Once you’re fully aware of imminent danger the response stage occurs, that point in time when the human survival mechanism kicks in and the decision to fight, flight or freeze is made. Hopefully since it is a grizzly bear you will freeze, instead of trying to fight or run from it.

Drawn out the process would look as follows:

Symptoms Associated with the Fight, Flight or Freeze Syndrome

For someone trained in violence, such as a bouncer, law enforcement officer, or soldier, the danger signs are easily recognizable: a hidden hand, bulging pocket, hunter’s glare, empty-street or new footprints in a jungle trail all have meaning, hence the transition from sign to signifier to response is a smooth one.

More importantly are those schooled in violence understand there are proper levels of force for each threat encountered. For instance, police officers draw their weapons only as a last resort, bouncers rarely strike customers unless the situation warrants it, and soldiers avoid firing on unarmed civilians at all costs.

However, for the inexperienced person the danger signs often go unrecognized, hence they are surprised by the intensity of a confrontation, or else ambushed by an attacker. Such mental dullness leads to panic, confusion, chaos and sensory overload, along with an inappropriate response that can have fatal consequences for both victim and attacker alike. Case in point whereas the bouncer might simply toss an unruly drunk out of the bar while experiencing the fight response, the inexperienced person would pull their pistol and shoot the drunk because they’re too frightened to consider the use of non-lethal force.

In regard to the flight response, the same applies. Whereas the soldier during the heat of battle would drag his wounded comrade to safety, the untrained person would run and leave their injured friend to the mercy of a marauding gang. Or when faced with overwhelming odds the soldier would freeze and avoid detection while the untrained person would run, thereby announcing their presence. Below is a graph illustrating trained and untrained responses.

Trained and conditioned responses, sometimes take months even years to develop. Special Forces operatives usually undergo a year of extensive training before ever seeing combat. The same applies for law enforcement officers, firefighters, paramedics and even bouncers. Furthermore, time spent patrolling the streets, or on the battlefield, heightens their sense of awareness, which in turn allows them to experience the fight, flight or freeze syndrome in a calm and detached state, unlike the ordinary civilian.

And herein lies the problem with recreational martial arts practice and self-defense programs. Recreational martial artists are often led to believe they are learning how to fight, but sadly the dojo bears little resemblance to the mean streets of most metropolitan cities. And even in schools devoted exclusively to self-defense students may never experience the fight, flight or freeze syndrome because while physically practicing realistic techniques on a subconscious level, they feel safe because of the familiarity of their surroundings.

Worse yet are those who teach one-day seminars to unsuspecting persons all the while guaranteeing complete protection from any and all threats. This can and does happen frequently in large corporations, government agencies, and private companies when a well intentioned person desires to improve work safety, yet knows little about realistic self-protection. Hence a martial arts instructor is paid to lead a self-defense seminar and the corporate staff comes away with a false sense of security and a handful of knowledge that may prove more dangerous than useful. For example, on several occasions I have personally witnessed self-defense instructors advocate striking the thorax as a first response in addition to the advice “just keep moving forward, you’ll work through the fight or flight as you go.”

How you react to danger on the street, battlefield or at home will begin first and foremost with the sign, signifier, fight, flight or freeze syndrome. The battle will be won or lost inside your mind and body long before the first shot, or punch, is fired or thrown. Past experiences, training and conditioning, mental alertness, physical conditioning, personal phobias, time and place will all determine your response. More importantly though, there is no quick and easy answer for dealing with fight, flight or freeze. Either you condition yourself to work through it, or you don’t. It is always present because of our genetics and those who understand its effects have a far better chance of survival, than those who don’t.

This article is based on my latest book, Escaping Darkness.

Michael J. Rosenbaum began his martial arts training at the age of five when his father instructed him in both Judo and Boxing. At the age of fifteen, he began studying Isshin Ryu Karate and by the time of his seventeenth birthday he had been introduced to the Burmese fighting art of Bando. At the age of eighteen Michael enlisted in the U.S. Army. He went through infantry school, airborne school, jungle warfare school, and was a member of the elite 82nd Airborne division, where he put his … More »