Fighting Ranges and Danger Zones | YMAA
Skip to main content
FREE Shipping Order Over $70. (US Only, Conditions apply)    |   Up to 40% Off. Exclusions apply. 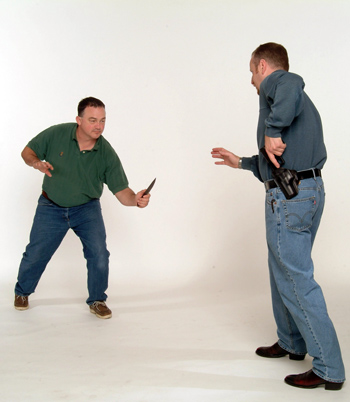 Once a criminal selects a victim, he must move into a position from which an attack is possible. Always remember that to assault, rob, or rape you, he must be close enough to talk to you. He will attempt to maneuver into this position by stealth (which is defeated by being alert), or by ruse… Positioning prior to the assault is vital to him, as he relies almost totally on surprise for success.

“Once a criminal selects a victim, he must move into a position from which an attack is possible. Always remember that to assault, rob, or rape you, he must be close enough to talk to you. He will attempt to maneuver into this position by stealth (which is defeated by being alert), or by ruse… Positioning prior to the assault is vital to him, as he relies almost totally on surprise for success. If you avoid his attempts to properly position himself, you forestall the attack.” ~Tom Givens, author and firearms instructor who has trained law enforcement officers at the local, state, and federal level; foreign government agents; and military personnel including members of the 20th Special Forces Group.

There are no absolutes in self-defense. Every situation will be different and unique. The closest thing to an absolute, however, is that it is critical to maintain sufficient distance between yourself and a potential assailant to give yourself time to react. You may be in imminent danger from an unarmed attacker within about 10 feet. For an armed attacker this range is extended to a bare minimum of 21 feet. The Tueller Drill established a minimum distance of about 21 feet for armed attackers since most adversaries can close that gap and fatally assault you with a knife, sword, or blunt instrument in about 1.5 seconds, as fast as most trained practitioners can react. One and a half seconds seems like an awfully long time until you try it for yourself.

At a handgun retention class I took several years ago we tried a modified version of this drill. Everyone wore white t-shirts and protective eyewear. The attackers carried Sharpie markers to simulate knives while the defenders used paintball guns to simulate firearms. The rules were that the defenders had to hold their guns by their sides and could not move until the attackers had already moved first. If an attacker got hit in a vital area with a paintball pellet he or she was only allowed to take one more step then fall forward. It was permissible to strike while falling.

Admittedly, it is harder to aim and fire a paintball gun than a real firearm, but it sure seemed like an easy “win” scenario for the shooters until we actually got started. The results were interesting: between fifteen and twenty feet, many of the defenders ultimately missed hitting their fast-moving attacker on their first shot, frequently not getting off a second without being “cut.” The old adage that action is faster than reaction was very apparent.

Even though we did not have to withdraw the paintball guns from a holster, we had to wait for the attackers to make the first move. Because a “critically wounded” attacker got one step after being hit, almost every defender was cut regardless of whether or not they shot their attacker first.

Furthermore, attackers only had to stop after suffering vital area hits (e.g., torso, head). The room was not big enough to try this at even longer distances but the instructor noted that most people can close thirty feet in about 2 to 2.5 seconds so the results would likely be similar even at slightly longer ranges.

I suspect that since the paintball splats really hurt at close range through a light t-shirt, the knife-wielders were motivated to move with realistic combat speed. I know I was when I took that role! I further suspect that is why we did not use squirt guns for this drill. At ten to fifteen feet all the defenders received “fatal” wounds every single time, even when the defenders attempted to move off the line of their opponent's attack. I'm not sure this was a completely realistic scenario; nevertheless it was illuminating. Although I came home covered with bruises, paint, and ink, this drill really drove home how fast a motivated aggressor can move under stress conditions and how difficult it is to aim at and hit a fast-moving target when you are adrenalized yourself.

Distance is Critical for Safety

A distance of 21 feet is not necessarily great enough to keep you safe from a determined attacker. You need to pay attention not only to how far away from you a potential attacker is, but also to whether or not he or she is armed or in close proximity of a makeshift weapon. It is important to point out that while an armed attacker at 21 feet is a potentially deadly foe, this does not automatically imply that you should kill him or her out of hand.

If, for example, you are armed with a firearm and already have a bead on your knife-wielding attacker, there may still be sufficient time to request his surrender or otherwise warn him off before you have to fire. If he charges, you obviously have to shoot, yet until you get to that point you may still have other non-lethal options available. Regardless, distance is critical for safety.

Now that we know distance is important, I find it useful to break weapon-defense fighting down into ranges, as certain instruments deploy better at some distances than they do at others. In general, the closer you are to an opponent, the more danger you are in simply due to reaction time, yet this is not always the case. Each weapon will have an optimal range wherein it is most effective.

With certain devices such as pole weapons you may be better off fighting close up so that you can work inside their most effective range. With other devices such as knives you may be better off further away so that you have a chance to run. Given the chance to do so, you'd be better off running from a pole weapon too, of course, but that applies to all types of weapons and goes without saying. Other weapons, such as firearms, are less effective up close where you can grapple with them as well as far away where it is easier to miss.

In every case, a good understanding of the optimal fighting range for whatever weapon you are facing can help you ascertain how much danger you are truly in and help plan the best way to keep yourself safe.

Since fights are dynamic, ranges will vary throughout an encounter. For the most part, rather than describing distances in feet or inches I prefer to use body or weapon lengths so that descriptions can be applicable for practitioners and weapons of any size. Try not to get too hung up on exact distances; the important message is ensuring that you understand enough about your proximity to danger to make wise decisions.