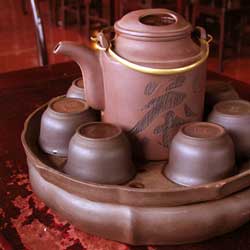 Find Your Teacher and Practice Humbly

Don't waste time in only theoretical research. Practice and theory should go together. From practice, you gain experience, and from theory, you have a clear guideline for practice. Some people hesitate due to the danger involved in martial arts, qigong, or meditation, accomplishing nothing and simply wasting time. Be cautious but determined, and learn from the experience of others, and you will find the right path. Study the Classics passed down in the lineage of your art. Find a teacher, and practice, practice, practice.

Buddha traveled the countryside one day and came to a river. An old Qigong master lived there, who asked him, "You are the Buddha? If so, can you do the same thing I can? I cross the river by walking on top of the water!" Buddha said, "That is very impressive. But how long have you practiced it?" The old man replied proudly, "It took me nearly forty years to achieve it." The Buddha looked at him and said, "It took you forty years! It takes me only a few coins to cross the river on the ferryboat."

Often we spend too much time on unimportant things. Treat your time preciously and use it efficiently. Get rid of your dignity. If you take your dignity too seriously, you will not find a sincere teacher willing to teach from the heart.

A young Samurai swordsman entered the house of a famous Zen master. He looked at the master, bowed and said, "Master! I have reached a deep level of Zen, both in theory and practice. I have heard you are great so I come here to bow to you and hope you can teach me something." The Zen master looked at this proud young man. Without a word, he went into the back room and brought out a teapot and a teacup. He placed the cup in front of the young man and started to pour the tea into the cup. The tea filled the cup quickly and soon began to overflow. The young man looked at the old man with a confused expression. He said, "Stop, master! The teacup is overflowing". The old Zen master put the teapot down and smiled at him. He said, "This is you. You are too full already. I cannot teach you. If you wish to learn, you must first empty your cup." Can you be humble?

When you find a good qualified teacher or source of learning, treat it preciously, so you don't miss the opportunity of learning. This chance may not come again.

Traditionally, it was very difficult to find a qualified teacher. Even if you found one, you would not necessarily be accepted. Today, it is easier to collect information since there are so many books, and DVDs available. But the guidance of an experienced teacher is crucial to reach the final goal. Subtle advice can save you a great deal of time and effort. When you are lost in a big city, even though you have read the map, guidance from a passerby could save a lot of effort.

A young man had already spent more than seven years searching for a good master. He came to where a great teacher lived deep in the remote mountains with a few students. He was received kindly and expressed his intention of learning from the master. The master looked at him for a while, then brought out a teapot and a teacup.

He poured tea into the cup, stopping when the tea reached the brim. He put the teapot down with a smile, hinting to the young man that the place was already full. He could not accept another student. The young man looked at the cup and realized what it meant. He lowered his head in sadness. Noticing a rice straw on the floor, he picked it up and carefully stuck it into the tea. The tea did not overflow. He looked at the master's face with hope, showing him, Look, there is still space for me. The tea did not overflow. Through this silent communication, the old master realized that the young man was one of those rare intelligent ones who could comprehend the profound feeling of the art. He accepted him with delight. It is very difficult to find a humble and intelligent student able to comprehend the art deeply and to develop it. When a teacher finds this kind of student, it will be like a precious pearl in his hands.