Five Qigong Categories | YMAA
Skip to main content
FREE Shipping Order Over $70. (US Only, Conditions apply)    |   Up to 40% Off. Exclusions apply. 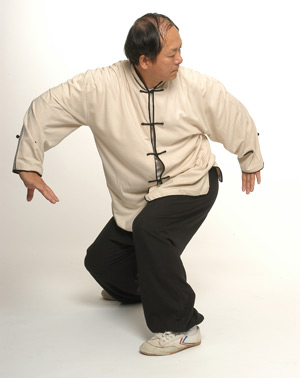 It is very important to keep the Qi (internal energy) circulating smoothly in your body. Many different kinds of Qigong exercises have been created to achieve this, but they can generally be categorized into five groups according to the main purpose of the training.

It is very important to keep the Qi (internal energy) circulating smoothly in your body. Many different kinds of Qigong exercises have been created to achieve this, but they can generally be categorized into five groups according to the main purpose of the training.

The main purpose of the Qigong styles in this category is to first gain mental and spiritual calmness, peace, and balance. With this mental balance, you can then engage in moving exercises which maintain the smoothness and balance of the Qi circulation. This category uses both still meditation and moving meditative exercises.

It is believed that many illnesses are caused by mental and emotional excesses. These emotions use up Qi, and cause stagnation in the channels and organ systems, which causes you to get sick. For example, depression can cause stomach ulcers and indigestion. Anger will cause the liver to malfunction. Sadness will cause compression and tightness in the lungs, and fear can disturb the normal functioning of the kidneys and bladder. Chinese Qigong practitioners therefore realized that if you want to avoid illness, the first step is to balance and relax your thoughts. This is called “regulating the mind” (Tiao Xin). When your mind is calm, and you are emotionally neutral, your Qi will automatically regulate itself and correct imbalances.

In the still meditation used for maintaining health, a major part of the training is getting rid of thoughts so that the mind is clear and calm. When you become peaceful and calm, the flow of thoughts and emotions slows down, and you feel mentally and emotionally neutral. This kind of meditation can be thought of as practicing emotional self-control. When you are in this “no thought” state, you become very relaxed, and can even relax deep down into your internal organs. When your body is this relaxed, your Qi will naturally flow smoothly and strongly, clearing obstructions in the channels and maintaining your health. This kind of still meditation was very common in ancient Chinese scholarly society.

Chinese physicians discovered that certain movements or exercises increased the Qi circulation around the internal organs. Some of these movements are similar to movements which are characteristic of certain animals. It is clear that in order for an animal to survive in the wild, it must have an instinct for how to protect its body. Part of this instinct is concerned with how to build up its Qi, and how to keep its Qi from being lost. We humans have lost many of these instincts over the years that we have been separating ourselves from nature. One typical set of these Qigong exercises which is still practiced today is called Wu Qin Xi (Five Animal Sports DVD). Another is the Eight Pieces of Brocade (book and DVD). 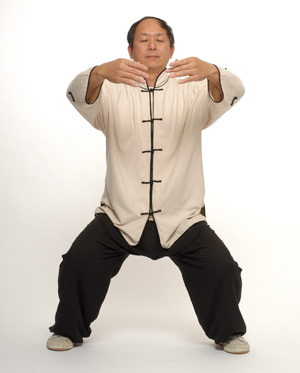 Over the thousands of years of observing nature and themselves, some Qigong practitioners went even deeper. They realized that your body’s Qi circulation changes with the seasons, and that it is a good idea to help the body out in these periodic adjustments. They also noticed that during each season, different organs had characteristic problems. For example, in the beginning of autumn the lungs have to adapt to the colder and drier air that you are breathing. While this adjustment takes place, the lungs are susceptible to disturbance, so your lungs may feel uncomfortable and you may catch colds easily.

Your digestive system is also affected during seasonal changes. Your appetite may increase, or you may have diarrhea. When the temperature goes down, your kidneys and bladder will start to give you trouble. For example, because the kidneys are stressed, you may feel pain in the back. Focusing on these seasonal Qi disorders, the meditators created a set of movements which can be used to speed up the body’s adjustment. These Qigong exercises are taught in the Four Seasons Qigong DVD.

Chinese doctors discovered through experience that some of the movements could not only maintain health, but could also cure certain illnesses. Using their medical knowledge of Qi circulation, they researched until they had found many movements which could help cure various illnesses and health problems. Naturally, many of the them were not unlike the ones used to maintain health. This is not surprising, since many illnesses are caused by unbalanced Qi. When this stagnation continues for a long period of time, the organs will start to be affected, and may be physically damaged. As a matter of fact, as long as your sickness is limited to the level of Qi stagnation and there is no physical organ damage, the Qigong exercises used for maintaining health can be used to readjust your Qi circulation and treat the problem.

However, if the sickness is already so serious that the physical organs start to fail, then the situation has become critical. In this case, a specific treatment is necessary. The treatment can be acupuncture, herbs, or even an operation. Some Qigong exercises are designed to speed up the healing, or sometimes even to cure the sickness. For example, ulcers and asthma can be cured with some simple exercises. Recently in both mainland China and Taiwan, certain Qigong exercises have been shown to be effective in treating certain kinds of cancer.

Acupressure or Qigong Massage is also commonly used instead of needles to adjust the Qi imbalance. This is done mostly by Qigong experts who are able to use their body’s Qi to adjust the patient’s Qi through touch or acupressure. This is seen in Chinese Qigong healing practices and Japanese Shiatsu massage. These are taught in the Qigong Massage book and DVD.

The two preceding categories either maintain the health that a person already has, or else treat illnesses once they appear. The theories and the principles for these categories are simple, and the training is conservative. Many Chinese Qigong practitioners were not satisfied with this, and searched for a way that would not only maintain health, but would also increase the Qi circulation and strengthen the organs. In this more aggressive approach to Qigong they attempted to find a way to overcome the normal course of nature. They refused to accept that the length of a person’s life is set according to destiny. They believed that if they understood the course of nature (Dao) completely, they would be able to find a way to lengthen their lives. This category of Qigong training is practiced mostly by Buddhists and Daoists.

Over the more than nineteen hundred years of research, the religious meditators discovered the way to slow down the degeneration of the organs, which is the key to obtaining a long life. There have been many Buddhists and Daoists who have lived more than 150 years. In Daoist society it is said: “One hundred and twenty means dying young.”

Unfortunately, all of this Qigong training has been passed down secretly in the monasteries. It was not until the last twenty years that these secret theories and training methods were revealed to the outside world. An important part of this training to prolong life is Marrow/Brain Washing Qigong. The basic idea of Marrow/Brain Washing Qigong is to keep the Qi circulating in your marrow and brain so that the marrow and the brain stay fresh and healthy. 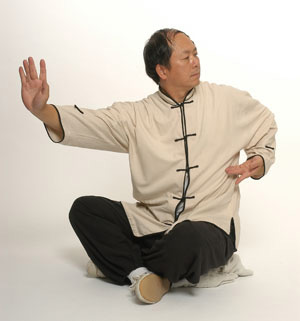 Your bone marrow manufactures most of your blood cells. The blood cells bring nourishment to the organs and all the other cells of the body, and also take waste products away. When your blood is healthy and functions properly, your whole body is well-nourished and healthy, and can resist disease effectively. When the marrow is clean and fresh, it manufactures an enormous number of healthy blood cells which will do their job properly. Your whole body will stay healthy, and the organs will not degenerate.

Although the theory is simple, the training is very difficult. You must first learn how to build up your Qi and fill up your eight Qi vessels, and then you must know how to lead this Qi into the bone marrow to “wash” the marrow. However, except for Daoist and Buddhist monks, there are very few people who have lived more than 150 years. The reason for this is that the training process is long and hard. You must have a pure mind and a simple lifestyle so that you can concentrate entirely on the training. Without a peaceful life, your training will not be effective. This is why the Daoist and Buddhist monks hide themselves in the mountains. Unfortunately, this is simply not possible for the average person. Still, a regular Qigong practice will certainly increase your general longevity and vitality, and offset "unnecessary aging".

In the Liang dynasty, martial artists started to use Qigong to increase the effectiveness of their arts. Such training can also help to improve health. However, some martial artists will even use certain Qigong practices which they know will harm their health, if these practices will improve some aspect of their fighting ability. An example of this kind of training is Iron Sand Palm. Qigong is commonly used in many traditonal martial arts styles, such as Shaolin White Crane Kung Fu(book and DVD).

The Daoists and Buddhists use Qigong to reach a level of attainment far beyond the average person’s. They are striving for enlightenment, or what the Buddhists refer to as Buddhahood. They are looking for a way to lift themselves above normal human suffering, and to escape from the cycle of continual reincarnation. In order to reach this stage, Marrow/Brain Washing Qigong training is necessary. This enables them to lead Qi to the head, where the spirit resides, and raise the brain to a higher energy state, such as the Muscle/Tendon Changing and Marrow/Brain Washing Chi Kung discussed in the book "Qigong, the Secret of Youth".