Form as a Vessel for Tai Chi Principle—Part 1 | YMAA
Skip to main content
FREE Shipping Order Over $70. (US Only, Conditions apply)    |   Up to 20% Off. Exclusions apply. 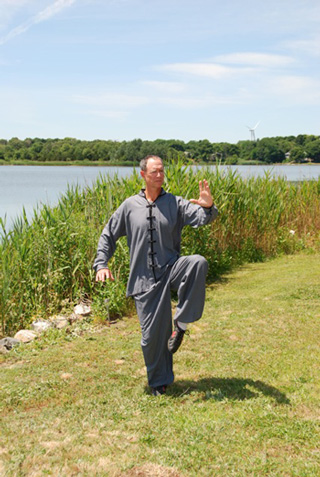 Form as a Vessel for Tai Chi Principle—Part 1

When the average person thinks of Tai Chi, the image that I expect most often comes to mind is one of some person or persons practicing a slow motion Tai Chi form sequence. This is quite reasonable given Tai Chi’s usual portrayal in the various media.

“Many spokes share the wheel’s hub;
Yet it is the center hole that makes the wheel useful.
If you form clay into a vessel;
It is the space within that makes it useful.
Cut doors and windows for a room;
And what is not there is what becomes useful.
Therefore, benefit comes from emptiness;
Usefulness from what is not there. ”
—Tao Te Ching (Chapter 11)

When the average person thinks of Tai Chi, the image that I expect most often comes to mind is one of some person or persons practicing a slow motion Tai Chi form sequence. This is quite reasonable given Tai Chi’s usual portrayal in the various media. This image is not an entirely incorrect association but it is incomplete. In fact, most people who have not undertaken a formal study of Tai Chi Ch’uan, and this includes martial artists from other styles, have little idea that there is so much more to Tai Chi than meets the eye (recall here the metaphor of Tai Chi as an iceberg, its greater bulk hidden from view).

The important principles of Tai Chi, which serve as a basis for its practice, are generally imperceptible to all but those schooled in their intricacies via lengthy study of the Form. In truth, it is the expression of Tai Chi’s principles that renders the form optimally useful. The form itself is merely a vessel for those principles.

Learn the Tai Chi Form to Get the Principles

There are many good reasons to practice the Tai Chi form. In the study of any style, it is the practice of the Form that builds strength, reduces the apparent effects of stress, and teaches balance, fluidity, and more. However, Tai Chi runs much deeper than the mere series of movements comprising its form. Thus the Tai Chi form movement sequence should not be misconstrued as representing all that is Tai Chi. Learning the form well, aside from offering the aforementioned tangible benefits, is also essential in order to learn and embody the full spirit and deeper principles of this ancient discipline.

It is the mindful slowness of Tai Chi that allows us to notice aspects of ourselves not readily apparent at life’s usual pace. Tai Chi does more than merely allow us such notice; it compels it. “Allowing” us and “compelling” us such notice are two significantly different dynamics. Merely “allowing” seems somehow to infer a haphazard or coincidental experience that may or may not present an element of incentive along with the opportunity for such notice. “Compelling” on the other hand, infers a deliberate and unavoidable dynamic which, by design, opens doors into our deeper selves.

In order to gain such access and exploit the full range of benefits that the form has to offer, one needs either unusual insight or a suitable guide. The form itself comes with no assurance that its mere practice will inspire profound insight or illuminate us to Tai Chi’s deeper essences. Open doors, after all, are by themselves only that; we still must choose to pass through those doors. Hypothetically, someone could learn all the movements of a given form, even to the point of performing them well, and still not be doing Tai Chi, at least not in its more profound sense. I freely admit to this having been so in my own case earlier in my career when, as a young skilled Kung Fu practitioner, I displayed an apparent command of all the superficialities of the Tai Chi form, but little else. Observers to my practice who knew little or nothing about Tai Chi were inevitably impressed by my execution of moves, while those more in the know politely withheld comment.

Other qualities requisite to Tai Chi, besides the mere memorization and execution of the moves, include:

Tai Chi mastery entails an integrative process that transcends the form itself. The “trick” is to somehow “break through” from Tai Chi as a mere superficial exercise regime, to develop a practical understanding of how these principles and essences can work for you. Once you do that you will be at a point where you can navigate your own course. Until you reach that point, it bears repeating, that the best way to get there is by practicing your form often, and under the guidance of a knowledgeable teacher.

You need the Form in order to get the principles via direct experience. Conveniently inherent in the form is the means for accomplishing just that. But only if you know how to decipher Tai Chi’s “code” will you be able to distill its subtler essences. When all is said and done, it is our mastery of those essences, the embodiment of Tai Chi’s age-old principles, which determines the quality of our practice. I will even go so far as to say paradoxically, that the Tai Chi form itself, though initially requisite, is ultimately superfluous. This is bound to raise the hackles of some Tai Chi purists, but the fact remains that there are many different styles of Tai Chi, each with their own form or forms. It stands to reason that if there were only one right way to do Tai Chi then there would only be one form or one style necessary or even possible to express that one right way and any other approach would either be redundant or wrong. As it is, there are different styles, with different forms, all of which apparently have withstood the test of time on their own merits.

Thus the benefits of Tai Chi must not be inherent in the moves of any particular form per se, but rather in one’s interpretation and expression, through the form, of the underlying principles. You do need the form in order to fully comprehend and experience the principles, but the principles must be understood first, prior to relative mastery, just as an art student needs to learn how to mix paint before expressing himself through painting. Then, just as mixing paint eventually becomes second nature to the skilled artist, requiring little practice, once you have learned the principles of Tai Chi the expression of those principles lends itself to almost any context, within or without the form.

Conveniently again, the form is not only the best vehicle for learning the principles, it also remains the ideal venue for expressing those principles. Through it one can extract the myriad benefits that Tai Chi has to offer and apply those benefits in life outside of Tai Chi class or form practice. This raises some interesting questions. Once an advanced level has been reached and the form has been mastered so that its benefits permeate one’s life, does one then no longer need to practice in order to continue to derive benefit? Should one then discard or neglect the form? Is Tai Chi mastery akin to earning a doctorate, suggesting perhaps that one has gained the requisite bulk of knowledge to remain proficient? I think not. Rather it is just the opposite. None of life’s lessons are any more static than we are as individuals. Just because we may be in a better place now than where we were previously does not mean we neither have anything more to learn nor room for further personal growth.

Is asking whether or not we should continue to practice once relative mastery has been achieved a silly question? Again, I think not. The question really brings to the forefront the contrast between Tai Chi as a personal learning process and other conventional learning venues; the likes of which many of us experienced as we were growing up. In our Western culture, education is often approached or presented in a linear fashion. From grade school on, students typically undertake studies of interest (or obligation) to be followed through step by step to a logical conclusion, at which point attention is simply refocused elsewhere. In my opinion, linear learning is overly focused on the goal rather than the process. This unfortunately creates a tendency toward linear thinking, which limits one’s creative possibilities. Happily, Tai Chi espouses a different paradigm, one in which the process of learning remains a goal unto itself. Thus the Tai Chi form remains an ideal environment in which to reinforce our growth as an ongoing process and its continued practice is an opportunity to celebrate all that we have already learned.