Four Chokes and Cranks for Street Use | YMAA
Skip to main content
FREE Shipping Order Over $70. (US Only, Conditions apply)    |   Up to 40% Off. Exclusions apply.

Home >> Articles >> Four Chokes and Cranks for Street Use 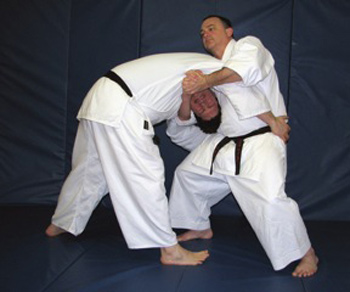 Four Chokes and Cranks for Street Use

The type of chokes and cranks discussed here are designed for the street. Several of them have been banned from judo competition because they are too dangerous for sport.

Since they may result in life-threatening injuries to your opponent, you must only use chokes when the situation warrants a high level of countervailing force.

Attempting a choke on the street without practice is a poor choice for combat, one that is very likely to fail. Supervised practice is essential.

You will most likely learn these techniques by practicing with a uniform gi initially. This heavy clothing not only facilitates many chokes, but also does not tear easily. Once you get good, practice with a t-shirt too. It is very important to be able to use these kinds of techniques in street clothes. Finally, practice against a shirtless opponent so that you will be prepared for every eventuality.

Successful chokes and neck cranks require that you control the other guy’s movement until he passes out or gives up. That’s easiest to do, and most commonly done, from the ground. If both you and your adversary are on the ground, you can hold him in place with your legs while choking him with your arms and/or hands.

Never intentionally go to the ground in a real fight, however, unless you can do so safely.

While you’re working on your opponent, paying attention to getting the choke in place, his friends may intervene and put the boots to you.

Once you have successfully choked an opponent unconscious, release the pressure while maintaining the architecture of your technique. You can never know for sure if he’s playing possum until you let up a little, so don’t relinquish control too quickly in case he begins to fight back. Conversely, you do not want to inadvertently choke him to death either, so loosening up is a happy medium that maintains your control but provides a window of safety.

This is done from the ‘mount’ position. When in the mount, you need to be straddling your opponent, sitting on his lower stomach to control his hips. Your knees are on each side, riding along by his floating ribs. With both hands, not necessarily at the same time, reach behind your opponent’s head and cup the back of his skull with the palms of your hands. Once both hands are behind his head, cover one with the other and place both of your elbows on his collarbones. Using the shoulder and collarbone area as a fulcrum, pull his skull forward, crushing your opponent’s chin into his sternum.

This is a reverse choke and neck crush. While the guillotine can be done from a standing position or a ground position, the ground is most common and generally the most effective. Gyaku hishigi often comes from an attempted tackle, or wrestler’s take down by your opponent.

The opponent’s head is pushed into your right armpit and your right arm wraps around his head placing the blade of your arm across his throat. As this arm wrap comes across the opponent’s throat, you drop to the ground, opening your legs so you can wrap them around his lower abdomen and hips. This leg wrap is very important, as without it you will not be able to maintain control of your adversary and the choke will fail.

You can grab your own hands, left to right, to apply the choke, or in this instance grab your own clothing with your right hand. This one-handed method is preferred, if possible, as it frees up the left hand for striking the opponent’s kidneys. Unlike a sports competition, you will want to augment your controlling techniques with striking techniques to help subdue your adversary. With the choke set, use your legs to push the opponent’s hips away from you so that you can stretch his spine. Arching your back can also create more stretch. 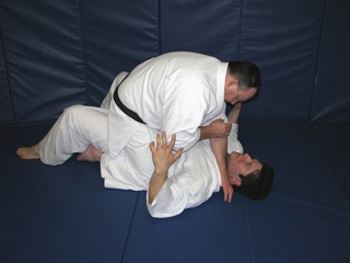 This technique can be very fast, yet it can also work into it very slowly. Ratchet into position smoothly, getting each component in order or it is unlikely to work properly on the street.

A “naked” choke is one that does not require an opponent’s heavy clothing or uniform gi to be effective. It only requires your arms to execute properly. When untrained individuals and practitioners who focus on sports competition are thrown or fall to the ground, they frequently give up their back, landing on all fours with their face pointing toward the ground. This is a common wrestling position as well.

If your opponent gives you his back, it is relatively easy to perform a rear naked choke. It is important to get his hips secured by wrapping your legs around the waist first though. This assures that you will have adequate control. You may wish to lock your feet together at the ankles for additional support.

The choke itself is done with the inside (thumb side) of the arm, placing the ulna bone against your opponent’s trachea (or the carotid artery of your adversary’s throat). Rip your off-hand arm in the crook of the elbow and wrap that hand across the top of your adversary’s head. Cinch your arms together like a nutcracker with his neck in between them. Rotating your choking arm can change the technique dramatically, depending on the placement of your arm and hands. Cinch your grip while driving your arm bone into the other guy’s throat to secure the choke.

These techniques are very popular as they can be used from the guard (bottom) or the mount (top) when fighting on the ground. Each of these chokes requires a heavy piece of cloth (for example, coat, shirt, scarf, towel, belt) to execute successfully. The hands are placed differently in these two chokes yet they appear very similar.

Gyaku juji jime places the fingers inside the opponent’s lapel. Your knuckles are placed across your opponent’s skin, gripping the collar in the palm of your hand as you are face to face. Nami juji jime uses the opposite grip with your thumb inside the lapel.

Whichever grip you choose, your hands must be placed deep alongside the neck in order to be effective. Grip deeply along the collar toward the back of your opponent’s neck, keep your elbows close to your ribs, and then pull downward.

Yamada Sensei wanted us to actually touch the mat (or ground) with the knuckles of our hands to insure that the hands were deep enough around the opponent’s neck; this is a good rule to follow.

The legs are used once again to hold the opponent in check immobilizing his hips as in the previous techniques. Not only can you control the hips, but you can also use your legs to once again stretch your opponent from heat to hip. Often when the opponent has paused and has stopped fighting momentarily, you know that you have sunk the choke into their neck well. This may be followed by a sudden burst of frantic thrashing as he attempts to break free before his oxygen supply is cut off.