Generating Martial Power (Jin) | YMAA
Skip to main content
FREE Shipping Order Over $70. (US Only, Conditions apply)    |   Up to 20% Off. Exclusions apply. 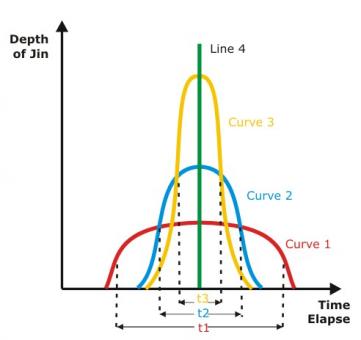 But no matter which Jin, in order to manifest maximum power you must have both the strength of the physical body (Yang) and a sufficient supply of smoothly circulating Qi (Yin). “Qi”, which is pronounced Ki in the Japanese arts, is the Chinese word for “energy”, and pertains to all forms of energy in the universe. In martial arts and qigong, it specifically refers to human Qi, the bioenergy or lifeforce within every cell of the human body.

The external physical strength manifested in specific external movements is called “External Jin”; it is a Yang manifestation of Jin. The internal Qi’s build up and circulation is called “Internal Jin”; it is the Yin manifestation of Jin. When this internal and external coordinate and support each other harmoniously and efficiently, it is called “the unification of internal and external”. (The spelling of the word Jin is used to avoid confusion with another important concept in Chinese martial arts with the same pronunciation, "jing", which means "essence".)

You should also understand that Jin can be again divided into Yang Jin (commonly called “Attacking Jin”) which is aggressive and used for an attack, and Yin Jin (commonly called “Defensive Jin”) which is defensive. There is another category of Jin, which is neither for attacking nor defending. No matter which category, when the Qi is manifested into a physical form, it is called “Emitting Jin” (Fa Jin).

Let us define what Jin is and how different Jins are classified. Theoretically, in order to activate the muscles to generate force or power, the mind must lead the Qi to the area where the muscles should be energized. For example, when you push a car, you must first generate an idea, and from this mind, an electromotive force (EMF) is generated. From this EMF the Qi is led to the muscles for energization. Through the nervous system (a highly electrically conductive system) the muscles are stimulated and contract, thereby generating action. The Chinese dictionary gives two main meanings for “Jin.” The first is “strong, unyielding, muscular;” this is usually applied to powerful, inanimate objects. For example, “Jin Feng” means a strong wind. It can also be applied to more abstract feelings of strength, as in “Jin Di” which means a strong enemy. The second dictionary definition of Jin is “Qi-Li” or “Li-Qi”, which refers to muscles which are supported by Qi. Using only your muscles is considered Li. However, when you use your concentrated mind to lead the muscles to do something, Qi will flow to where you are concentrating and enliven the muscles. This is considered Jin.

There are many types of Jin, but the one thing they all have in common is that they all deal with the flow of Qi. The most obvious type of Jin is “manifest Jin”, where you can see something happening, as when you push someone. Sensing another person’s motion or energy is also considered a type of Jin. In fact, in the highest levels of “sensing Jin”, you actually sense the Qi flow of your opponent and thereby know his intentions. These sensing Jins are enhanced by increasing the Qi flow to your skin. In general, the higher the level of Jin, the more Qi and the less muscular strength is used.

In the martial arts, it is said that Jin is not muscular strength alone. This means that although you must use your muscles every time you move, Jin is more than just muscular strength and proper alignment. There are several different kinds of manifest Jin. When you rely primarily on muscular strength, but also use Qi and your concentrated mind, it is considered “Hard Jin”. This kind of Jin is usually easily visible as tensed muscles. When muscle usage is reduced and both Qi and muscles play equal roles in the Jin, it is called “Soft-Hard Jin.” When muscle usage is reduced to a minimum and Qi plays the major role, it is called “Soft Jin.” Soft-Hard Jin and especially Soft Jin, are usually expressed in a pulse. Soft Jin is often compared to a whip, which can express a great deal of force in a very short time, concentrated in a very small area. When you snap a whip, it stays loose as it transmits a wave or pulse of energy along its length to the tip. Similarly, when you use Soft Jin your muscles stay relatively relaxed as you transmit a pulse of energy through your body. This is done with the tendons and the ends of the muscles, supported by Qi.

When a Soft Jin is manifested, the emission of Jin is a relatively short, smooth and relaxed pulse of energy, without any angular changes in direction. The pulse can be long or short, near the body or at a distance. It can be a sudden contraction and expansion as you bounce the opponent away, or an even sharper “spasm” as you strike or break something.

The "Depth of Jin" illustration may help you understand the difference between Jin and muscular strength (Li). The vertical coordinate represents the depth to which power can penetrate and the horizontal coordinate represents the elapsed time. The areas under the curves represent the power generated for each curve. We assume that the areas under the curves are the same, i.e., the power generated for each curve is equal. In curve 1, the power is generated, reaches its maximum, stays at the maximum for the time and then drops to zero. Without strong Qi support, this is a typical example of Li; muscular strength predominates and penetration is limited, as in the average punch. With Qi support, it would be considered “Hard Jin.” In curve 2, both muscles and Qi are involved and the power is at its maximum for the shorter time. Since the power generated is the same as with curve 1, the peak has to reach higher, which means there is greater penetration. In order to do this, the muscles must be relaxed to allow the Qi from either the local area or the Lower Dan Tian (elixir field) to flow smoothly to support them. The Lower Dan Tian is located in the center of your abdomen, and is known to be the center of the body’s energetic circulatory system. This is the general idea of “Soft-Hard Jin.” In Soft-Hard Jin, commonly the body is soft and relaxed so the Qi can be led to the area where the Jin will be manifested. Once the Qi arrives, a slight but sharp muscular tension is intentionally generated and the power is manifested. This is the Jin used predominantly for striking in soft-hard martial styles, such as White Crane Kung Fu. In curve 3, the time in which the power is generated is even shorter. The muscles must be extremely relaxed to generate and express this sharply penetrating power. In order to reach a deep penetrating power, speed is a crucial key for successful Soft Jin manifestation. Naturally, Qi plays the predominant role in this “soft” Jin. Curve 3 is typical of the Jin used for striking in the internal arts, such as Taijiquan (tai chi).

From the point of view of muscle usage, curve 1 is like a wooden staff, curve 2 is like a rattan staff and curve 3 is like a whip. The wooden staff is stiff like tensed muscles, the rattan is more flexible, and the whip is soft; its power sharp and focused. Even curve 3, which is a very high level of power, is still not the highest power in the martial arts. The highest level of the Qi manifestation into Jin can be represented by line 4. In this level, the muscular strength is reduced to minimum and the Qi plays the major role of the power manifestation. When a martial artist has reached this level, he can transport his Qi into his enemy’s body through the acupuncture cavities to shock organs and cause damage or death instantly. The time used is extremely short and the penetration is deeper than is possible with Jin or Li. This is known as the skill of “Pressing Cavity” (Dian Xue ) or “Pressing Primary Qi Channel” (Dian Mai/Dim Mak ). Detailed understanding of the body’s Qi circulatory system and which points are vital at which time of day is necessary for these techniques to be effective.

(Editor's note: Dim Mak is controversial, and is considered mythical in modern times. Many people do not believe it to be possible, and in fact they do not believe that Qi or the body’s energetic circulatory system even exists. However, in traditional Chinese martial arts society, it is well known and understood. In addition, during World War 2, the Japanese performed extensive studies on the Qi circulatory system, using Dim Mak techniques on captured Chinese civilians from the Manchou territory (Northeast of China). By carefully recording the data resulting from these "experiments", torturing and killing many people in the process, they verified the accuracy of their knowledge of the body’s energetic circulatory system and the effectiveness of the Dim Mak techniques. This information has been published in other countries, and was made available for publication in America, but upon reading the details after translation into English by YMAA, it was decided to be unethical and dangerous to publish the information.)

Li can be considered closer to Hard Jin in which muscular strength plays the major role in power manifestation. It is said that Li or Hard Jin is derived from the bones and muscles. The Qi is supported from the local area. Soft-Hard Jin and Soft Jin originate from the tendons and are supported strongly by Qi, which is generated in the Lower Dan Tian. Since the tendons are emphasized in the Soft-Hard Jin and Soft Jin, the muscle fibers can be relaxed, allowing the Qi to flow through them and support them. If your force is derived from the bones, there is a strong tendency for you to resist and meet your opponent’s force directly. When your force is derived from the tendons it is easier to be flexible and elusive, to disappear in front of the opponent’s attack and to appear at his weak spot.

In order to have stronger Qi, you need a meditative mind, which can generate a stronger EMF. Through this concentration, your spirit can be raised to a highly focused stage from which you can govern your entire being more efficiently. When this happens, you will be able to manifest your physical power to its maximum.