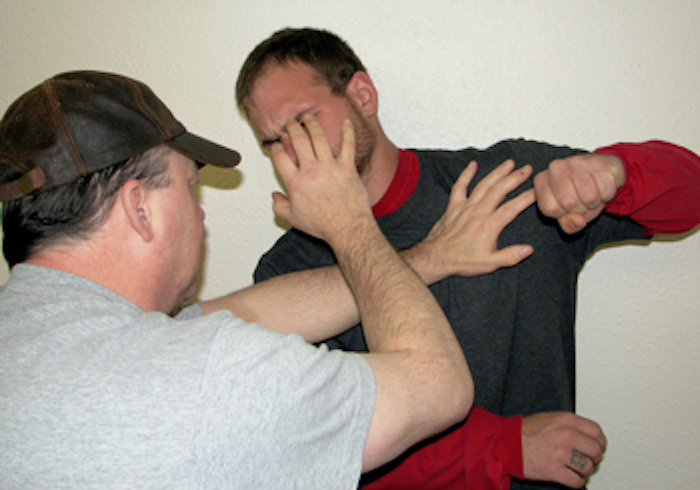 It’s Hard to Fight When You Can’t See

I purchased the wrong type of coffee yesterday, a ground drip blend rather than the whole bean variety that I normally buy. When I popped the top of the vacuum-sealed can, a blast of grit exploded into my face and left eye.

I purchased the wrong type of coffee yesterday, a ground drip blend rather than the whole bean variety that I normally buy. When I popped the top of the vacuum-sealed can, a blast of grit exploded into my face and left eye.

Now, I'm a pretty tough guy, a black belt in karate who's been in more than 300 violent altercations working stadium security. And I wore contacts for years before getting Lasik surgery, so I'm somewhat used to having foreign objects in my eye. Yet, I experienced a nearly overwhelming desire to fall onto the floor and scream like a little baby. I didn't, but I really, really wanted to. If you've every gotten smoke, sand, or similar substances in your eyes you have a good idea of what I mean.

I stumbled to the bathroom and then took the better part of five minutes, and most of a bottle of eye-drops, to rinse the sludge out of my eye. It's still red and sore some five hours later.

So, what does a face full of coffee grounds have to do with self defense? It's very tough to fight effectively when you cannot see. That makes an assailant's eyes an important target in a legitimate self-defense scenario. Compared to all our other senses, eyesight is dominant in its impotence. It's not only how we view the outside world but also how we acquire targets and defend ourselves against assaults.

A couple hundred words of caution on self-defense

Assaulting the eyes is dangerous stuff. In a legitimate self-defense scenario it can be life-saving, but where it's not warranted it can lead to serious jail time, or worse.

Not only can you cause horrific injuries, but you also let the other guy know that he is in a very serious confrontation. If you attack his eyes and miss, you're going to piss him off in a primal way, becoming the target of a lot more anger and violence than you might expect. Anything goes from that point on.

Anybody who wears glasses can relate to this. Having your glasses knocked off by another person, even accidentally, pisses you off. It is personal, it is primal, and it's instantaneous. Even in an accident, it takes real effort to control the instinctive reaction. This gives you a glimpse of the type of response you can elicit from another person when you attack his or her eyes.

So, while attacking the eyes can incapacitate an adversary, it can enflame him, too. Consequently you need to know how to do it right. And practice effectively. The best techniques use either your thumbs or fingers. Either way, attacks must be executed powerfully, with resolve, and often more than once. The chances of failure without these three points are high.

Here's how to attack the eyes most effectively:

Attack with the thumbs in self-defense

The thumb can be used as a wedge to displace the eyeball from the eye socket. This is done by placing your thumb against the inside of the bridge of his nose and pushing into the corner of your adversary's eye socket. Typically, you'll use your fingers as a guide alongside the other guy's face. It works much better if you can support his head with your other hand or block it against an immovable object such as a wall, the ground, or a parked car so that he cannot move his head back or twist away.

When shoved forcefully into the eye socket, your thumb works much like a wood-splitting wedge, displacing the eyeball. This ultimate result is not typically a full removal of the eye from the socket, which is very challenging, but rather a stretching of the optic nerve that attaches the back of the eye and shoots excruciating pain into the brain.

A thumb to the eye can cause blurred vision, disorientation, shock, and in some cases blindness, more than enough trauma to let you escape to safety in most cases. If you actually displace the eyeball, the disabling affect is even more severe.

Attack with the fingers in self-defense

If you are a trained martial artist you almost certainly know how to do an open-hand block (e.g., hiki uke). After initially intercepting the opponent's blow, you can bounce off his arm and thrust your fingers into his eye socket. Or, you can rake across the eyes. Either way, whenever your open hand crosses in front of the other guy's face, you have an opportunity to reach his eyes. Even if you do not make contact, such movements can be distracting, leaving the adversary open to a follow-on attack such as a low kick or a knee strike.

Attempting to jab your fingertips straight into an adversary's eye can be challenging. It is fast and effective, but will damage your hand if done incorrectly, so advanced training is necessary. Horizontal raking across the eye, however, can be nearly as incapacitating and can be easier to execute on the street. A good way to do this is to thrust your palm against the attacker's cheekbone, which serves as an anchor and guide. Then sweep away from the attacker's nose toward his ear dragging your fingertips across his eye. This motion is relatively natural, like twisting the lid off a jar.

Raking the eyes can damage the cornea, the outer lens of the eye. Scratching the eye with your fingertips can cause excessive tearing, light sensitivity, pain, and disorientation. While it may not cause sufficient trauma to let you escape immediately, it is likely to set up a fight-ending follow-on strike.

While the eyes can be a lifesaving target in legitimate self defense situation, it is psychologically challenging to place your thumb or finger into another person's eyes with the intent to do damage. It is also hard to practice such things safely with a partner. However, there are a couple of ways to practice eye strikes effectively. As with any training regimen, oversight by a competent instructor is strongly encouraged for the safety of everyone involved.

The first option is to use a body opponent bag (BOB). This training tool is shaped like the torso and head of real person. It facilitates contouring strikes to various vital points such as the eyes, and is soft enough to strike hard without damaging your hands, assuming you do it correctly. Begin slowly and gradually build speed and power, practicing with the thumb and finger strikes against the BOB until you can do them instinctively.

The second option is with a live training partner. This can be dangerous if done improperly, so exercise extreme caution. Cut an orange in half, duct tape it to a set of safety goggles, and give them to your training partner (despite the goggles, your partner would be well advised to keep his/her eyes shut tight and have a towel handy to wipe away any juice that gets through). Practice striking the orange with the thumb and finger strikes. Striking against a real human, even one wearing this type of getup, can be disconcerting in a way that using a target dummy is not. Even if you use a BOB, it's a good idea to try the live drill, too.

The first time you feel the orange give way beneath your fingertips should prove enlightening. It is important that a training partner be wearing the fruit to better simulate a real person than can be done with an orange alone or taped to a target dummy. You may well find that you are incapable of striking another person's eyes, something that is best known before encountering a life-or-death confrontation on the street.

Self-defense really isn't about fighting like most people think. It is about not being there when the other guy wants to fight. Or de-escalating the situation before the first blow is struck. Despite your best intentions, there are times when violence cannot be avoided. Consequently, if you find yourself in a bad situation where the only alternative is to fight your way out, eye strikes can be an important aspect of your martial repertoire. It's very hard for an adversary to fight when he/she cannot see.