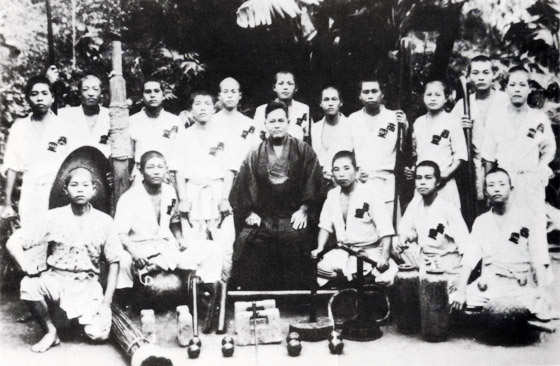 In an age where karate training is often viewed as a family pastime for some or a career path for others, many of the older and more traditional forms of training have slipped from use, replaced in many cases by a quest for physical entertainment.

In an age where karate training is often viewed as a family pastime for some or a career path for others, many of the older and more traditional forms of training have slipped from use, replaced in many cases by a quest for physical entertainment. But in the dojo of Okinawa and in the few other dojo around the world where karateka cling to their traditions, training methods that challenge martial artists and students still exist. One such method is known as hojo undo, meaning supplementary training; and within that is kigu undo, training with tools or implements designed to test the karateka’s physical and mental tenacity and endurance. In a confrontation of any kind, weakness is likely to be exploited. So it is better to discover these flaws while working with the tools of hojo undo than to wait until we find ourselves facing off against a foe.

Except for the makiwara, few of the other tools found in hojo undo made the transition from Okinawa to Japan in the early years of the twentieth century. But even back then, Okinawa’s indigenous fighting art of karate was beginning to spread beyond its island shores, taking its first tentative steps toward the eventual world-wide phenomena it is today. These days who has not heard the word karate? Although well known by name, few actually know karate through experience, and even fewer can lay claim to understanding it. This is because to grasp the true depth of karate often takes more than a single lifetime. Far beyond the fighting techniques and the acquisition of rank and titles coveted by many these days lie the true values found in traditional martial arts, the perfection of character through diligent training. Even so, serious karate practice over many years will not develop a person’s true character, but it will reveal it.

Sometimes called “conditioning,” hojo undo plays an important role in the overall education of the karateka. Although the majority of karate is best practiced against a training partner, the tools being introduced in this article will also provide resistance and impact and over time will help to improve the skill level of those individuals who pursue this type of training. Increased muscular growth, enhanced breath and body coordination, and greater physical strength are just some of the benefits inherent in hojo undo training. These reasons alone make the practice worthwhile. Okinawan karate is based on four main doctrine, fitness, strength, strategy, and application. Hojo Undo forms the genesis of the second of these.

Perhaps the most famous tool within the pantheon of hojo undo apparatus is the makiwara, a stout post set firmly in the ground or to an internal wall, no more than four inches wide and padded at the top to accommodate the fist slamming repeatedly into it. This tool is widely used wherever karateka gather to train. As well as the seiken (fore fist) where only the knuckles of the middle and index fingers make contact with the target, uraken (back fist), empi (elbow) shuto (outer edge of the hand) and haito (inner edge of the hand) strikes are commonly used in connection with the makiwara. Beginning slowly and without applying maximum force, punches and strikes are increased in both number and force until our strongest blows are thrown into the target. No other training partner will withstand the amount of impact we eventually learn to deliver into the makiwara, nor stand ready to go again the very next day.

The chiishi is, in my opinion, the best single tool to use for overall body conditioning and body and breath coordination. With it, strength can be improved across the whole length of the body from the fingers to the toes. Simply by picking up the chiishi, the grip employed strengthens the fingers, wrists, and arms. The various exercises that use the chiishi target specific muscle groups in the arms, shoulders, and upper body, also, the continual squatting in to and out of shiko dachi (low stance) also strengthens the legs. Over time this tool will help create physical and mental endurance as well as harmony between body, breathing, and our physical movements. Indeed, control of this tool is difficult, even impossible, if this harmony is not achieved. We draw closer to the value of this type of training by understanding that such harmony is brought about by the spirit (intention) of the karateka.

The nigiri gami (gripping jars) are used primarily, as the name suggests, to strengthen the power of the karateka’s grip. Modern karate, taught by commercial instructors, has changed into a striking art, a type of karate that has become over-reliant on the use of punches and kicks, using boxing to get out of trouble. Okinawan karate has always included grappling and strangulation, as well as strikes, within its arsenal of techniques. Kumite (fighting) is looked upon as a last resort that should, if physical conflict breaks out, be brought under control with the minimum of activity; boxing serves only to prolong the fight, and the longer the combat continues the greater the risk of suffering injury, or worse. A powerful grip around the throat, the groin, or the softer inner areas of the arms and legs, has a way of focusing the aggressor’s mind in ways that a punch or kick never will. Far from obsolete, developing a potent grip provides one more opportunity to bring violence to a quick and decisive conclusion, a principal that lies at the very heart of traditional karate.

This tool is made from nothing more than a round post fixed firmly into the ground. A pad consisting of rope wrapped around the target area is optional, as are the arms and even legs that can be fixed to the tool to enhance this no-partner-needed practice of karate. This tool in its simplest form is used to temper the blocking surfaces of the user’s arms and legs, as well as those parts of the body used in certain strikes such as shuto uchi (outer edge of the hand), shotei uchi (open palm strike), and tetsu uchi (hammer-fist strike). Once limbs are attached to the post, it is used to practice trapping, grabbing, and joint locking in combination with the already-mentioned strikes. Overall, the ude kitae makes an ideal training partner for those wishing to try their techniques on ‘someone’ willing to take everything, and then some.

Of all the tools used in traditional Okinawan karate, the kongoken is different in that it was imported not from China, as many ideas and training tools were, but from the mid-Pacific islands of Hawaii. The famed karate teacher Chojun Miyagi visited Hawaii in 1934 and while there witnessed the local wrestlers working with a heavy iron ring, almost as large as a man. So impressed was he by its use he returned home with a kongoken when he left the islands in early 1935, and immediately introduced the tool into the hojo undo training program of his students. Used in various ways to grapple and wrestle, the kongoken is also used to develop a startling level of explosive thrust of the hips, known in karate as ‘koshi’ as well as building the size and strength of the upper chest and arm musculature. In common with all the lifting tools and as a result of constant use, the grip is developed into a devastating weapon.

The key to acquiring benefits from hojo undo or kigu undo is through diligent and regular training over a lengthy period of time. Patience and common sense must prevail when dealing with weights and hard surfaces that will prove immediately unforgiving to those who show a lack of either. Be content to develop skills and power slowly, and in doing so learn to push back your physical and cerebral limits to levels you perhaps never thought possible. By doing that you will gain the confidence that comes with knowing not only your limits, but your potential too. This training is not merely old-fashioned weight training coming from a time before the existence of the home gym and community health spas; it is an integral part of a karate education. At its heart is an opportunity to connect strenuous physical effort with a calm and determined mind, and the ability to do that when under pressure is a powerful weapon indeed.