Introduction and Short History of Tai Chi Ball Qigong | YMAA
Skip to main content
FREE Shipping Order Over $70. (US Only, Conditions apply)    |   Up to 20% Off. Exclusions apply. 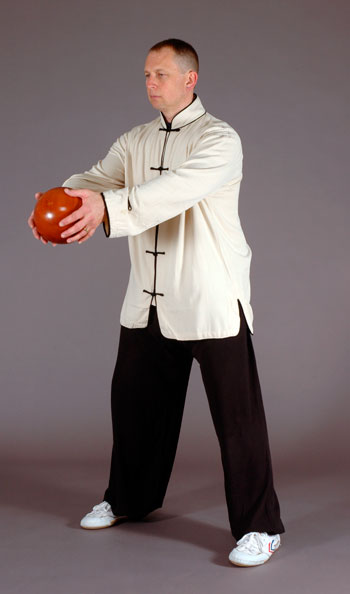 Though the existence of taiji ball qigong has been common knowledge in both Chinese martial arts and laymen societies, its popularity has been limited due to the secrecy of the training techniques. Taiji ball qigong training, in each style, was kept secret and passed down only to trusted students.

Though the existence of taiji ball qigong has been common knowledge in both Chinese martial arts and laymen societies, its popularity has been limited due to the secrecy of the training techniques. Taiji ball qigong training, in each style, was kept secret and passed down only to trusted students. In martial society, special taiji ball qigong training was considered crucial in bringing martial artists to a much higher level, in both physical condition and with qi’s manifestation in battle. Many training methods, especially those that were able to enhance the healthy condition of body, have spread from the martial arts society to laymen society. Now, the most common and popular medical taiji ball qigong training, rotating two ping-pong sized balls in one’s palms, has been recognized as one of the most effective ways of improving qi circulation, especially for the lungs and heart. In addition, through this kind of training, the condition of hand arthritis can be remedied effectively.

Taiji balls (taiji qiu) used in the martial arts society come in different sizes and are made from a variety of materials. The size can range from as large as a three- to four-foot diameter wooden ball, to, as mentioned earlier, a ping-pong sized ball. The largest wooden balls are hung from the ceiling. The most common sizes for training are from ten inches to one foot in diameter. The balls can range from being made of an expensive blue jade to average cheap rock. Today, the blue jade balls are rare, costing nearly $50,000. The rock taiji balls may be cheap, but are usually quite heavy. This kind of ball training is more commonly practiced in Chinese external martial arts that emphasize physical conditioning more than qi circulation.

For the internal martial art styles, such as Taijiquan, Xingyiquan, Baguazhang, Liuhebafa, Fo Zhang (Buddha palms or Buddha hands), and hu die zhang (butterfly palm), the balls made from wood are preferred. This is because to these internal styles the quantity of qi built up and also the quality of qi’s manifestation are considered the most important in training. With wooden balls, the qi between the palms can be felt and led more easily than with balls made of stone.

No one knows when and how taiji ball qigong originated. However, logically it can be assumed that when martial artists realized that roundness was the crucial key of neutralizing incoming stiff and square power, they began to search for ways of training this roundness. They looked for an object to help them develop and attain this feeling of roundness. The round objects were adopted. The internal martial styles, compared to external arts, most likely contributed more to the development of taiji ball training, due to the significant emphasis it places on roundness and adhering.

First, let us trace back the origin of internal styles’ development in Chinese martial arts history. Available documentation for the time before a.d. 500, reveal that no distinction was made between internal arts and external arts. However, only a short period of time later, the internal arts were developed.

According to the historical record, it is understood that techniques and forms with the same principles as taijiquan were in existence during the Ling dynasty (a.d. 502–557), and were taught by Han, Gong-yue, Cheng, Ling-xi, and Cheng. Later, in the Tang dynasty (a.d. 713–905), it was found that Xu, Xuan-ping, Li, Dao-zi, and Yin, Li-heng were teaching similar martial techniques. They were called the thirty-seven postures (san shi qi shi), post-heaven techniques (hou tian fa), or small nine heaven (xiao jiu tian).

If we take a closer look, there is one major event that clearly influenced the change in the training concept of the entire Chinese martial arts society. The shift is attributed to the qigong practice passed down to the Shaolin Temple by an Indian Buddhist priest, Bodhidarma. According to the books The Recording of the Shaolin Temple (Shao Lin Si Zhi) and The Complete Art of Shaolin Wushu (Shao Lin Wushu Da Quan), Bodhidarma was invited to China, from India, in a.d. 527, during the time of emperor Liang Wu (a.d. 502-557) and emperor Wei Xiao Ming (a.d. 516–528).

Before Da Mo passed away in a.d. 536 at the Shaolin Temple, he passed down two important qigong training classics, Muscle/Tendon Changing Classic (Yi Jin Jing) and Marrow/Brain Washing Classic (Xi Sui Jing). The Yi Jin Jing taught Shaolin monks how to change, or condition, their physical bodies from weak to strong, while the Xi Sui Jing taught the monks how to nourish the brain with qi for enlightenment. The entire concept is based on the simple theory of using the mind to lead the qi to the physical body for strength manifestation or to the brain for spiritual enlightenment. From Da Mo’s theory and muscle/tendon change practice, Shaolin monks were able to manifest their martial power to a significantly higher level. This enhancement of power was crucial in battle.

Some martial artists believed that since the mind is the foundation of power, they should train the mind’s concentration and focus (internal). When this mind is strongly focused, the qi can be abundantly led for power manifestation with the techniques. This was the beginning of internal styles. While at the same time, many martial artists believed that in order to reach a high level of concentration and focus, it would take many years of meditation practice. In order to survive in a violent society, they should first learn techniques and then gradually enter into the internal side through meditation practice. That is why there is a saying in Chinese martial society, “Internal is from internal to external, and external is from external to internal. Though the paths are opposite, the final goal is the same.”1

All styles were searching for ways to increase endurance, a crucial key to survival. After generations of practice, they began to realize that in order to conserve energy and physical strength; one must be round and soft. We personally believe that taiji ball qigong or similar training, existed in almost all the martial styles before the Chinese Song dynasty (a.d. 960–1280), and was kept secret.

Today, taiji ball qigong also has two approaches. One is from internal to external, while the other is from external to internal. The Shaolin Temple in Song Mountain focuses on external training; their taiji balls are made of either rock or wood. Taijiquan in Wudang Mountain has become the leading style of internal training, using balls made of wood.

As mentioned earlier, the size of the ball can differ from one style to another. The small balls, which are commonly used for health, were actually the balls used to strengthen the finder’s grabbing power. They were also used to improve one’s qi and blood circulation right after iron sand palm (tie sha zhang) training, and were also commonly used as a throwing dart weapon (an qi).

The history of taiji ball training is scarce. One very valuable document is the Great Dictionary of Chinese Wushu. According to the writings of Tang Hao (a.d. 1897–1959), taiji ball qigong training, in taijiquan, was passed down by Liu, De-kuan (a.d. 1826–1911), and Liu learned it from an unknown, non-taijiquan, martial artist. According to Tang Hao, the biggest ball that could be used was a huge ball made of brass, which was hung from the ceiling. The practice included solo and matching practices.