Introduction to Violence: Scale of Force Options | YMAA
Skip to main content
FREE Shipping Order Over $70. (US Only, Conditions apply)    |   Up to 20% Off. Exclusions apply. 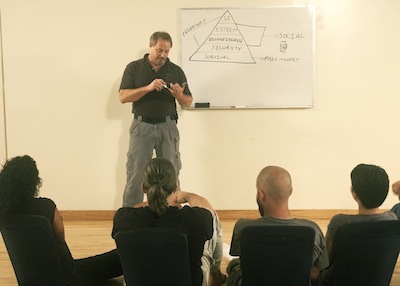 Even if you have never completed a woodworking project, you probably know that you could pound nails with a drill. You also know that it’s not a horribly effective method of doing it. And it is really tough on the drill.

Even if you have never completed a woodworking project, you probably know that you could pound nails with a drill. You also know that it’s not a horribly effective method of doing it. And it is really tough on the drill. If you want to drive nails, then a hammer is a much better choice. Clearly, knowing your tools makes any woodworking project go more smoothly.

Similarly, a scale of force options gives you a set of tools for managing violence. It also provides a basis for selecting the appropriate application to use in any given situation. The first three levels—presence, voice, and touch—can help stave off violence before it begins, precluding the need to fight. The last three levels—empty-hand restraint/physical control, less-lethal force, and lethal force—are applied once the confrontation becomes physical. Choosing the right level of force lets you control a bad situation in an appropriate and effective way, increasing your chances of surviving without serious injury while simultaneously reducing the likelihood of adverse consequences from overreacting or under-reacting, such as jail time, debilitating injury, or death.

Before you can choose the proper tool, however, it is important to understand the environment in which you will use it.

I’d thrown…ahem…escorted more than twenty people out of the stadium that day, but I recognized him anyway. Sometime during the third quarter, he’d taunted a Coug fan one too many times and gotten a nice shiner on his left eye for it. But the cops assigned to help us manage the end zone were busy dealing with another altercation, so I gave him the option of leaving of his own volition. When I explained what he faced in terms of minor in possession, drunk in public, disorderly conduct, and assault, he made the wise choice and voluntarily missed the rest of the game. I confiscated his ticket, marched him out the gate, and summarily forgot about him.

But he hadn’t forgotten about me.

Nearly two hours later after the contest had finished and we’d gotten the stadium cleared, I spotted him in the parking lot. Not the public lot where tailgaters were still partying, but the credentialed employee parking lot where he did not belong. Unfortunately he recognized me too.

“You’re the SOB who threw me out,” he spat. Well it was a bit more colorful than that, but you get the idea…

Holy f**k, there’s a knife in his hand! I’m still in uniform, but totally alone. No backup, no radio. My mind is spinning, but my body reacts without conscious thought. I’d been practicing saifa kata for the last few months, so that’s my instinctive response.

I set a fence with my left arm, pivoting to the side. He’s still drunk. And slow. Nevertheless, the knife looks like a freaking sword as it flashes by. Checking his knife-hand arm with my shoulder, I smash him in the face with a left palm-heel. His head snaps back, but he starts to retract his hand for another strike. I grab his forearm, place my right elbow on his upper arm, and drop my weight. He loses balance, dropping with me and his head smashes into the back of my fist with a thwack. As his eyes un-focus, I’m able to grab the knife and spin away, wrenching it from his grasp.

Eyes big as saucers, he twists away, stumbles once, nearly falls, and then runs off. I look down at the knife in my hand.

Sh*t, there’s blood all over me!

I start shaking so hard it slips from my grip, nearly skewering my foot when it clatters to the pavement. Heartbeat pounding in my ears, I bent over to pick it up. Bile rises, puke splashing atop the knife and my boot. Ugh, I abandon the mess, race to my car, and grab a water bottle.

I can’t entirely wash away the mess, but at least the acrid taste is no longer in my mouth. I scrub my left hand clean, searching for the wound. Nothing. The blood was his.

Most martial artist’s “experience” with fighting stems from sparring, tournament competitions, or the occasional schoolyard brawl. For most everyone else, it comes from Hollywood movies, televised sporting events. You may think you understand what you are participating in, or know what you are seeing. Yet the realities of violence are not what most people think. In essence, there are two types of violence, social and predatory. In the former, you are fighting over a matter of face or status, while in the latter you may be fighting for your life.

The intent when it comes to blows in a social violence situation is to affect your environment. In other words, you want to establish dominance, to “educate” somebody, to get him out of your territory or something similar. There are virtually always witnesses, because you are seeking status from the outcome, either by beating the other guy down or by making him back off. Predatory violence, on the other hand, is a whole different beast from social disputes. There are usually no witnesses unless the predator has screwed up (or they are his accomplices). While the pickpocket might operate in a crowd, the mugger, serial killer, repeat rapist, arsonist, etc., generally won’t.

It is relatively easy to de-escalate impending social violence so that things won’t get physical, particularly if you are willing to lose face. Clever words are more important in these encounters. Unfortunately, the very factors that might de-escalate a social situation will almost certainly trigger a predatory attack if they make you appear weak. It’s only possible to de-escalate predatory violence by appearing to be too dangerous to attack. If you’re alert, aware, prepared, in decent physical condition, and capable of setting a verbal boundary, those are all major warning signs to the predator. Most will subconsciously pick up the fact that you have martial arts training simply by the way you stand and breathe during the confrontation.

Social violence can be a big deal, predatory violence even more so; these are situations where you may be forced to defend yourself. Sparring, tournament competitions, and the like are often called “fights” by their promoters, yet these events have virtually nothing to do with fighting. To begin, fighting is illegal. Sure, you may be able to get away with it using a legitimate claim of self-defense, but there are no winners, trophies, or status points in a real fight.

(This is an excerpt from Scaling Force—dynamic decision making under threat of violence by Rory Miller and Lawrence A. Kane.)