Karate Choices for Lifetime Achievements | YMAA
Skip to main content
FREE Shipping Order Over $70. (US Only, Conditions apply)    |   Up to 40% Off. Exclusions apply. 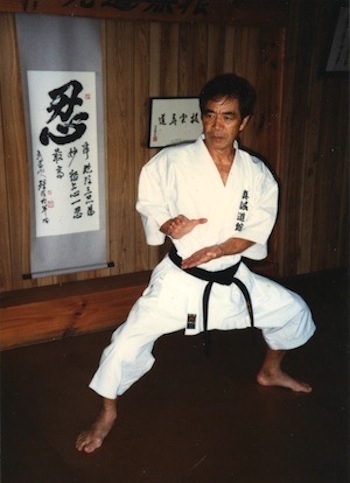 In karate, when your sporting days are over, you might, like many others, make the false assumption that you can simply move across to budo karate: if you do, you’re making a big mistake!

Actually, what happens is you move over to kenko karate, training to maintain an active body or lifestyle. Why so many make this error is unclear to me: people’s egos perhaps? Nevertheless, the difference in training between kenko karate and budo karate is enormous. Perhaps budo karate has a marketing appeal not found in kenko karate, and this is why so much noise comes from commercial karate instructors about one type of training with almost nothing about the other approach.

Sense Of Place In Karate

One might look no further than Tai Chi for an example of what happens to a martial art when successive generations focus on a single aspect of a multifaceted art. These days the “Grand Ultimate Fist” is considered by many karate instructors to be fit only for hippies and old people who are looking for an alternative cure for their arthritis. Clearly, they have no idea of Tai Chi’s full potential and see only one particular characteristic of this martial art.

It may be that karate instructors are keen to protect their macho image and so, regardless of the reality of what people are doing around the world, karate continues to be sold to an unsuspecting public as a deadly art of self-defense. On the other hand, commercial karate is advertised as safe for children! Another paradox, perhaps? I don’t think so. I think when we hear more than one message coming from karate instructors, it is safe to say they have lost their sense of place in karate, as well as their sense of direction.

If your aim is to become a karate champion, then by all means pursue your goal with all you have. Find a coach with a proven record of success and a stable of people who win more than they lose. Go to the karate groups who advertise themselves as “The Home of Champions” and boast of their accomplishments in the contest arena. Look for the ex-champion who is now passing on his proven skills to others and sign up with him. For these are the people who are able to immerse you in the world of sport karate you are looking for.

Whatever type of karate you wish to pursue you should first find a qualified teacher to guide you. In this regard, all three types of karate training share a commonality. Patience and common sense are needed at this important stage of karate training. The choices you make here are extremely important for they can have life-altering repercussions later on. Within the martial arts, and karate in particular, there are many self-proclaimed masters teaching improvised methods and systems that exist only to provide them with an income. In my opinion, once cash flow dictates a school’s reason for existing, the person at the head of the class is no longer a reliable teacher.

Kyogi karate offers its followers an exciting alternative to other sports. It provides a great way to gain and maintain high levels of fitness, and, like all good sports, works the brain as well as the body. With its potential for travel and personal achievement, it allows for individual success as well as team participation. It is possible to specialize in either sparring (fighting within a defined set of rules) or seitei gata, the solo gymnastic displays based on the traditional kata found in karate.

Continue Training Into Your Golden Years

Once you get too old to compete, you can remain involved by becoming a judge, a referee, or even a tournament promoter. If you have experienced a respectable level of individual success, then perhaps coaching the next generation of sports stars is also an option. Finding somewhere to learn this type of karate is easy. Almost every commercial karate club in the world is involved in kyogi karate. Phone books and Internet search engines provide easy access to people teaching karate as a sport. All you have to do is choose a decent coach and then give it all you’ve got.

This quotation comes from a conversation I shared with Hirokazu Kanazawa. At the time, he was in his mid-sixties and looked like a man who was twenty years younger. In the dojo, he moved like a man forty years younger! Today, over two decades on from that conversation, and with his eightieth birthday already come and gone, Kanazawa sensei continues to live an impressively active life, traveling the world teaching karate. He once told me that anyone can train to run quickly over a short distance, but it takes more than muscles to run a marathon; it takes a certain type of spirit. He pointed out that those who excel in running the 100 meters have very dynamic but short-lived abilities and after a few years, it’s all over, whereas those who run marathons can continue to run for most of their lives.

He observed that the study of karate was like a marathon, not a sprint. If ever there was an example of kenko karate in later life, you need look no further than Hirokazu Kanazawa. There is a sense of harmony and balance about the man that should make all karateka stop and think for a moment, especially those people who in middle age insist on training as if they were teenagers. And while some might use their advancing years as an excuse for laziness, serious karateka appreciate the need to train smarter rather than harder, and above all, to remember the need to continue training and not spend all their time teaching.

When age or a change in your health begins to alter your ability to train as you used to, what should you do? How can you go on training seriously enough to continually develop your body and your mind as you move forward toward old age? Exactly what kind of training should you be doing?

If your reason for training in karate is aimed at maintaining good health, you need never worry about fighting or gaining an ability to defend yourself. In fact, you never have to consider anything that will take you out of your comfort zone at all. All you have to do is turn up once or twice a week and have a bit of a workout kicking and punching, mostly in thin air. Every now and then, you can go berserk against a bag or a partner holding a pad and in that way reaffirm in your mind that the “skills” you are learning are somehow “real.”

You can train in a warm, safe, family-friendly environment, and at regular intervals throughout the year, you can pass your next grading test. You could do all of these things, but if you did, it would add nothing to your health or sense of wellbeing. For kenko karate, like kyogi and budo karate, requires a sense of honesty and sincerity that will test all who pursue it.

If you want to maintain mental, physical, and spiritual good health, you are going to have to work for it. You are going to have to earn the benefits you are looking for in your advancing years. I know of no traditional approach to karate training that offers an easy option. Modern commercial karate might. But I don’t consider the commercial activities certain people and organizations engage in today as karate. It is just business wrapped up in a black belt.