Krav Maga: Defenses Against Hot Weapons | YMAA
Skip to main content
FREE Shipping Order Over $70. (US Only, Conditions apply)    |   Up to 40% Off. Exclusions apply. 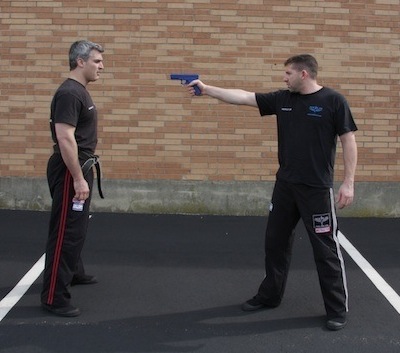 If someone pulls a gun on you and does not shoot, he or she wants something. It is possible that he or she may still shoot you, but not before achieving a desired ends. When possible, compliance with the gunman’s demands is the best solution.

If someone pulls a gun on you and does not shoot, he or she wants something. It is possible that he or she may still shoot you, but not before achieving a desired ends. When possible, compliance with the gunman’s demands is the best solution. Compliance, however, is not always possible; especially, if your instinct tells you the gunman intends you bodily harm no matter what. Carefully consider your options and course of action. Again, there may be situations in which attempting a disarm is impossible and you must comply with the gunman’s wishes. Firearms are often referred to in krav maga parlance as “hot weapons.”

To defend a firearm threat you must deflect-redirect the weapon using a body defense and move off the line of fire combined with simultaneous combatives to facilitate the disarm. Krav maga’s overriding philosophy is to give you any and every advantage. You might have to wait until the assailant closes the distance or lowers his guard in response to your feigned acquiescence, when, in fact, you are simply waiting for the best opportunity to disarm him.

Be aware of your surroundings and how they might affect your disarm including walls, curbs, parked vehicles, the confines of a small space such as an elevator, or a vehicle, and your footing. With all firearms disarms, carefully gauge the distance and your reach capability to deflect-redirect and secure the weapon.

If the assailant has a handgun and you decide to run, the greater the distance between you and the gunman, the more likely you will not be hit. To be sure, a bullet moves faster than any human reaction. Handguns are difficult to fire with accuracy at longer ranges and only skilled shooters can fire with accuracy at distance. Fortunately, criminals tend not to be the best shots, but the high-capacity pistol magazines give them up to seventeen chances or more to hit you.

It is helpful to envision several scenarios in which an assailant could deploy a firearm against you—and avoid them in real life. To be sure, the best defense against a firearm or any type of weapon is to avoid a situation that exposes you to danger. Common sense should always prevail. Going to an ATM at night alone does not make good common sense. Venturing into a parking lot without scanning your environment, or parking in an unlit are or in a non-heavily trafficked area are also not good strategies.

You must envision as many Negative-Five scenarios as possible. Do your best to plan or envision what you might do if faced with these extreme life-threatening circumstances. These scenarios could include a gunman surfacing from behind a neighboring parked car as you begin to enter your vehicle or confronting you from behind as you insert the key into your front door. Most criminals seek the element of surprise and plan accordingly.

For krav maga founder, Imi Lichtenfeld, a subtle fundamental training tenet emerged: the direct correlation between mental imagery and physical ability. As an example of mental training, think about the following scenarios and how you might react:

1. You are alone and entering your vehicle in a parking lot with vehicles parked to both sides and the front of your vehicle. An assailant armed with a handgun darts from behind the parked vehicle on your driver side and holds the firearm six inches from your back.

2. In a similar scenario, the assailant holds the firearm six inches from the back of your head.

3. The assailant holds the firearm to the side of your head in front of your ear while he is positioned in front of the rear passenger door.

4. It is late in the evening and the parking lot is deserted. The assailant, armed with what seems to be a handgun, stands three feet behind you and orders you to put your keys on the roof and move away from the vehicle. (This is very likely a strict compliance scenario unless you feel he intends you bodily harm no matter what.)

5. You are putting a child in the rear seat and an assailant approaches similar to Scenario No.1 above.

Continue to develop similar mental training scenarios taking into consideration multiple variables such as confined spaces between vehicles that may limit your movement.

For example, many modern vehicles have remote keys. Perhaps, rather than facing your vehicle as you prepare to enter it, it might be wise to “about face” to make sure no one is attempting to sneak up on you from the rear. You should also check in the backseat of your vehicle before entering it. Assess your surroundings and how a weapon disarm will be affected if your car is parked close to another car limiting the armed opponent’s movement along with your movement.

Notably, trained law enforcement professionals when under the stress of a violent encounter often achieve less than a twenty percent hit rate according to the FBI. It is the author’s opinion that such statistics should not be interpreted as criticism of these departments’ professionalism. Rather, these facts underscore the realities of a violent, often surprise encounter. You can therefore extrapolate that if you must run, it is a fair assumption that the odds are decent you may reach safety unscathed.

If you flee, you can choose to run in a non-linear pattern as fast as possible. In other words, flee using a zigzag pattern to make yourself a more difficult target or locate cover to stop a bullet such as a building or the engine block of a vehicle. A gunman has more difficulty swinging his gun-arm and body in the direction of his dominant arm to shoot accurately. If you are facing a right-handed gunman and you decide to turn and run, move laterally to your left—it is more difficult for him to swing the gun across his body as you run away. When encountering a left-handed gunman, as you turn to run, move to your right. These evasions are also applicable for rifle/and submachine guns (SMGs).

In an active shooter situation, it is preferable to begin your evasion plan (or a disarming technique) as soon as the threat is recognized. In short, non-telegraphed (body movements indicating what you are going to do before you actually do it) and unpredictable evasive maneuvers improve your chance of successfully disarming him or fleeing respectively.

If you cannot flee the active shooter scene, find cover or concealment. There is a difference between cover and concealment. Cover effectively shields you from incoming fire. Concealment hides you but is not impervious to gunfire. If you are located within reach of the gunman and you conclude fleeing or reasoning with him is futile, you must use the appropriate disarming technique.

If you find yourself in an active shooter situation and you cannot close the distance for a disarming technique, you can throw objects at the gunman such as bags, books, chairs, staplers, coins, etc. to either close the distance for a disarm or as distractions in your attempt to flee. If you are hit, you may wish to feign being dead to prevent the shooter from pumping more rounds into you.

In an active shooter situation within a crowd, one disarm technique, requiring great nerve, is to upend the shooter. Close on him from behind, reach down and clasp his legs just above ankles and brace one shoulder against his buttocks and yank sharply backward to dump him on his head. The assailant will let go of the weapon or, if he holds onto it, likely break his wrists on impact. As a last resort, a number of the intended victims may swarm the gunman throwing anything they can at him to overwhelm him. This tactic, for untrained people and sometimes trained people alike, is contrary to human nature. Without a determined brave soul to initiate and rally the group into action, this strategy is unlikely to succeed.

Below are ten common sense suggestions if you find yourself in an active shooter situation. Try not to panic, think clearly, and …

1. If the gunman is shooting in all directions, find cover—something that will stop high-powered bullets. Drop any objects that weigh you down or hinder your movement.

2. If you cannot find cover, drop immediately to the ground and scan again for cover.

3. If you are behind cover and you feel the need to locate the gunman or gunmen’s location(s), do not break your cover at torso height; rather, peek around your cover keeping low to the ground. You may wish to look for an improvised weapon such as rock or something hard to throw at him or hit him if he approaches and you have no other recourse.

4. The two-to-three-second rush rule suggests that fleeing by short running bursts for two to three seconds in a non-linear pattern, and then finding cover, hinders the gunman’s properly acquiring you as a target. Try to run in a low crouch but not so low that you cannot maintain speed.

5. If you decide to stay put, do not crouch down; lie down. By crouching, you could be mistaken by responding security personnel as an armed assailant. Do not assume you will be recognized as an innocent.

6. If you have to go around a building corner, do it quickly. If the shooter is there or there is another shooter, your quick appearance should surprise him, and provided the distance is appropriate, you may attempt a disarm or if the distance is greater, find other cover or double back.

7.  Windows present dangers. Obviously, glass can be shot through and the bullet(s) may spray shattered glass on you.

8. If you are behind cover and the shooter is targeting you, if you want to see where he is, peer around your cover but exit from a different place. The shooter might naturally expect you to egress from your initial vantage point. Escaping from another location might throw his reaction time and, consequently, his aim off.

9.  Secluding yourself in shadows can provide concealment.

10. Do not silhouette yourself. Placing your darker outline between the shooter and a lighter background can attract attention.

Under no circumstances should you give up. Remember, many victims die because they lose the will to live.