Krav Maga: Leg Defenses Against Edged-Weapon Attacks | YMAA
Skip to main content
FREE Shipping Order Over $70. (US Only, Conditions apply)    |   Up to 40% Off. Exclusions apply. 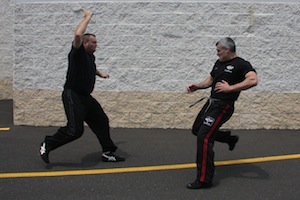 You will need any and every advantage to defend against a determined assailant using an edged weapon. An edged weapon does not jam or run out of ammunition and can seriously injure you with every thrust or slash. A significant number of the population worldwide carries folding edged weapons or some other type of cutting instrument.

You will need any and every advantage to defend against a determined assailant using an edged weapon. An edged weapon does not jam or run out of ammunition and can seriously injure you with every thrust or slash. A significant number of the population worldwide carries folding edged weapons or some other type of cutting instrument. Kitchen knives are accessible to just about anyone bent on doing harm. Never underestimate the harm an amateur but determined attacker can inflict—let alone someone skilled in edged-weapons use. Essentially, anyone with an edged weapon in his or her hand could be a deadly threat, particularly if he or she has no compunction about getting up close and personal.

Slashing to the jugular and major arteries is usually fatal, but lacerations to the other parts of the body are generally not. Thrusting wounds are far more dangerous. Puncture wounds of more than 1.2 inches can produce instant shock and seriously damage or shut down internal organs. It is likely that you will be wounded. Of course, try to prevent wounds to your eyes, neck torso, and major arteries. Nevertheless, whatever injuries you might sustain, relentlessly pursue your defense and counterattacks to end the threat. In short, the longer duration of the edged-weapon attack, the more your chances of surviving it diminish. Once you successfully defend and neutralize the threat, you must immediately think about triage. Seek professional help right away, and if unavailable, administer self-triage.

Running away from an edged-weapon threat is a real and, perhaps, the best option. If you must engage the assailant, krav maga once again emphasizes simultaneous defense and counterattack. The counterattacks must be targeted and forceful. The goal in striking an attacker’s eyes, nose, windpipe, groin, and knees is to short-circuit his ability to continue the attack. Damage the attacker as much as possible to destroy both his physical ability and resolve to press the attack. Attempting an edged-weapon disarm without debilitating counterattacks can, and will, get you seriously hurt or killed. While krav maga emphasizes simultaneous counterattacks and weapon control as soon as possible, you may have to counterattack and then disengage only to counterattack again. This must occur only when you deem it safe to close the distance, hurt the attacker, control the attacker, and remove the weapon.

Judging distances, the logical progression of a weapon’s attack path(s) even when initially blocked or redirected, and the varied angles of attack are paramount to a successful defense. My good friend, Sgt. Major Nir Maman (Reserves), one of the lead krav maga instructors for the Israel Defense Forces Special Operations School, says it best, “If your assailant deploys an edged weapon, your best response is to make yourself disappear. If you cannot disappear, your next best response is to pull out a firearm. If you do not have a firearm available, you want a long-range impact weapon such as a lead pipe where you can batter his edged-weapon hand while staying out of range of the edged weapon.” Nir’s obvious point is how dangerous an edged weapon can be. Edged weapons are often referred to in krav maga parlance as “cold weapons.”

Israeli krav maga uses two ranges in combination with body defenses to defend edged-weapons attacks—legs or hands. Either type of defense usually takes the defender off the line of attack in a position to deliver strong-counterattacks, with one exception: the instinctive defense against a surprise underhand attack. With krav maga hand defenses, employ a block or deflection-redirection when possible, with a body defense, combined with effective simultaneous counterstrikes, preferably to the assailant’s throat, groin, or eyes.

Kicks are usually employed when the defender sees the edged weapon at long range. Kicks harness your most powerful muscle groups and have the longest range of any of your personal weapons. In addition, kicks can be combined using shield-like objects, such as a bag or briefcase, to simultaneously block or deflect-redirect an edged-weapon attack away while delivering a debilitating combative to the assailant’s groin or knee. Strong defensive kicks with glicha keep the edged weapon farther away from you and are also best to stop a charging assailant’s momentum.

Hand defenses are used when the assailant closes the distance quickly, takes the defender by surprise, or the defender is in a close-quarters situation. Many students practice and emphasize hand defenses. However, when sparring against a facsimile edged-weapon attack, they quickly revert to and prefer leg defenses. Kick defenses also come naturally when facing an assailant threatening with the edged weapon, but who remains uncommitted to the attack. Notably, spitting in the assailant’s face as you launch your hand or leg defense is a tried, effective, proven tactic.

Regardless of the defense you use, even if you are slashed or stabbed, you must continue to fight. In training, you will probably be “nicked,” slashed, or stabbed. Obviously, the goal is to improve your skill set to avoid being wounded at all let alone fatally slashed or stabbed. Again, if your defense is imperfect and you are stabbed or wounded, it is imperative that you press your defense and counterattack. Remember, you will fight as you train, so, try to train as you will fight. If you no longer resist, your attacker will likely continue to administer wounds that will, no doubt, be fatal. Puncture wounds initially feel like strikes and slashes might not be evident until you see your own blood.

Straight Kick Against an Overhead Attack

One of the most typical edged weapon attacks is an overhand attack targeting the defender’s neck area.

The attack is best foiled at long range with a strong kick to the groin in combination with a body defense, especially, when the assailant is charging at you. Most important, you must step off the line of attack to prevent the knife from being plunged into you. With correct timing against a right handed overhead attack, you will step off the line with your left leg turning out, your left foot ninety degrees (opening up the base leg) allowing the right hip and your whole body maximum follow-through. Stepping out into the pivot also allows for glicha or a sliding step to drive the kick through the opponent with your body weight generating optimum reach and power.

A full-force kick to the groin or midsection will jolt the attacker’s body bringing his knife-arm elbow back to his body. Keep in mind that a kick to the groin will generally lurch the upper body forward while stopping the body’s progress at the hips. A kick to the torso will jolt the body backward. True to krav magi’s philosophy of harnessing and honing the body’s natural movements, the kicking leg will naturally retract on making contact. This is a crucial benefit because you retract the leg immediately to avoid being stabbed. This defense places you at the assailant’s dead side to press the counterattack allowing another lowlife sidekick to the assailant’s knee, multiple punches to his head, and control of the knife arm with a wristlock or cavalier to remove the weapon and/or take the assailant down.  If the attacker jumps, use a straight defensive kick to his midsection or chest to drive him back. Follow-up with another immediate left kick to his groin. Subsequent defenses may be needed depending on the situation.

If the assailant has the edged weapon in his rear arm, another strong option to defend against the overhead attack is a sidekick to the assailant’s lead knee with correct body lean and leg retraction followed by securing and taking away edged weapon with additional combatives. Be sure to execute the sidekick by properly turning the base leg heel toward the assailant with proper body back lean with bodyweight forward to drive through the kick.

These options take the defender’s torso even farther away from the attack, but in the case of an overhead edged-weapon attack, retract the leg instantly to avoid the edged weapon potentially being plunged into your leg. Either continue the counterattack with additional kicks or close with hand defenses to secure the weapon. This low line sidekick defense to the knee may be employed against any type of edged-weapon attack except an underhand stab.

A third option is to step off the line and “bail out” preferably to the assailant’s dead side by delivering a debilitating roundhouse kick with the ball of the foot to the attacker’s groin or shin to the assailant’s midsection. Again, if the leg is not withdrawn immediately, you are in jeopardy of the attacker’s edged-weapon arm dropping quickly and impaling the leg. Again, you must press the counterattack with additional kicks or hand defenses, and close the distance to secure and remove the weapon.