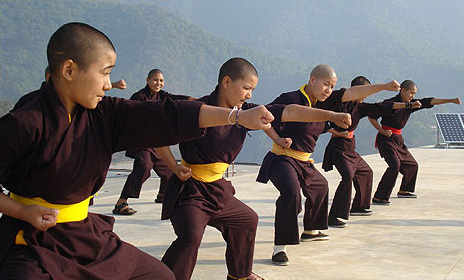 Martial arts training is making a comeback as a part of daily life for monks and nuns around the world.

For most nunneries, the initial interest in kung fu comes from the need for nuns to know self-defense when they travel from the nunnery. The training allows the nuns to be self-sufficient and discourages violence toward women in general. Martial arts practice strengthens the mind and body, making it easier to sit in meditation for 6 - 8 hours a day. Their quality of life is improved, as they become happier and healthier.

In addition, the women in modern-day nunneries are empowered and more equal to the male practitioners than in ancient times.

There are very few existing formal historical documents about nunneries and their martial training. However, you can find more information from martial arts novels written in ancient times. We can trust the novels to be historically correct to some degree, and they give us an idea of life at that time.

One of the most well-known nuns who reached a very high level was Wumei (五枚) during Chinese Qing Dynasty (清朝). Wumei's original laymen name was Lu, Siliang (呂四娘) and she was from a famous nunnery called White Cloud Nunnery (白雲觀) in Yunnan Province (雲南省). Wumei was known for her White Crane martial arts and was also known to be the teacher of Yan, Yongchun (嚴詠春) another famous female martial artist. Yongchun has been one of the most popular styles spreading around Canton (廣東) and Hong Kong (香港) and was the style learned by the famous martial arts movie star, Bruce Lee. Most of the styles taught in Chinese nunneries were either from Shaolin or Wudang. For example, Wumei's martial arts were of Shaolin linkage.

The Drukpa nuns in Nepal may now be practicing martial arts related to the Yongchun style.Yongchun was developed specifically to be practiced by females in the ancient times.

YMAA author Zhou, Xuan-Yun, is a present-day Daoist monk who recently relocated from Wudang mountain to Boston, MA. He says ,"Women at Wudang mountain traditionally trained the internal practices.  Maybe it's part of the yin nature, which tends to contract inward and produce stillness.  There are some now at Wudang who are proficient in tai chi.  Daoists wander, so it's hard to keep track of who does what and where."

It may confuse people that martial arts often are studied in a monastery. There are a few reasons for this martial arts training:

I believe there is a revival of classical martial arts today in nunneries out of necessity. People need to be able to protect themselves and stand up for others. It is excellent to see the traditional martial self-discipline in the modern nunneries. Through these disciplines, all nuns will be better able to understand the meaning of life.