Lessons from the Taijiquan Form Seminar | YMAA
Skip to main content
FREE Shipping Order Over $70. (US Only, Conditions apply)    |   Up to 20% Off. Exclusions apply. 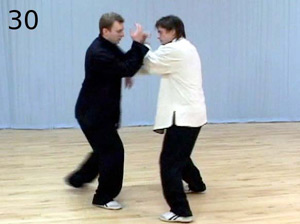 Lessons from the Taijiquan Form Seminar

I had the chance last weekend to teach at the YMAA Boston Taiji Form Seminar. I was tapped to teach the Two Person Fighting Set. YMAA canon maintains that the Fighting Set is the last thing a person trains prior to free sparring.

I had the chance last weekend to teach at the YMAA Boston Taiji Form Seminar. I was tapped
to teach the Two Person Fighting Set. YMAA canon maintains that the Fighting Set is the last thing a person trains prior to free sparring. Correct practice of the Fighting Set is more than memorization of the routine. Correct practice means you have grasped the key concepts of Range, Angle of Approach, Sense of Enemy, Listening Jin, Following Jin, Connecting Jin and Attaching Jin. If you
merely memorize the pattern you will never grasp the benefits of learning the routine.

Jim O’leary and I lead the section that was learning the Fighting Set and we had a good group of people with whom to work. There was one person with no prior knowledge of the Fighting Set.

Three experienced people were there for refinement. Everyone was very enthusiastic and put a lot of effort into the weekend’s endeavor.

We had the opportunity to discuss the theory that underlay the Fighting Set during the days we were together. I found the theoretical discussions rewarding with comments from the people who had already completed the Fighting Set very useful in highlighting what was going on in the routine’s choreography. I kept coming back to several points that come from the Taijiquan Classics during the talks we had.

“Power is generated in the legs, controlled by the waist and manifested by the hands.”

“When you are in an urgent position; look to the waist and legs.”

Earlier I mentioned that Range and several Jin are necessary for you to practice the Fighting Set correctly. One brief section of the set illustrated these ideas and the concepts I quoted from the Classics nicely. I want to highlight them in this article.

(Nicholas Yang and YMAABoston.com provided the chart and the pictures. If you are not familiar with the Fighting Set understanding what is going on in each picture may be a bit difficult at first. I will describe what is happening. Also please realize that the pictures don’t perfectly capture the content of the form. If you want to get that level of detail buy the Taiji Fighting Set – 88 Posture- 2 Person Matching Set DVD and take a seminar or class dealing with the material.)

Please note the pictures are numbered according to the steps they correspond to in the chart. We are looking at moves 30-39 of the Fighting Set. Attacker and Defender refer to the portion of the Fighting Set being performed, not any one person who is attacking or defending in the step being discussed. The Fighting Set is divided into offensive and defensive halves based on who has thrown the first punch in the sequence.

We start our discussion with the Defender (Dressed in a white top.) just escaping from the Attacker’s (Dressed in a black top.) Large Rollback, movement 30, and moving to counterattack 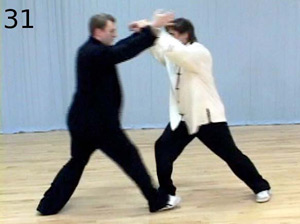 Wind Blows through the Temple

The Defender neutralizes the Large Rollback by stepping with the motion and uses Peng to put the Attacker in an awkward/urgent position. The Defender then steps his right leg forward to adjust the range to the Attacker. He strikes at the Attackers temples with both fists. The power for the attack is derived from shifting his weight from a back stance to a forward stance. I believe the key elements in this exchange are the following: 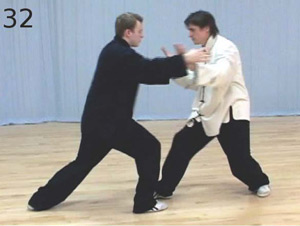 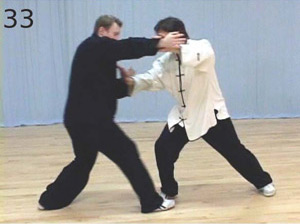 The Attacker counters the temple strikes by shifting to a back stance and yielding. (He can slide both feet back if necessary as long as he doesn’t reverse his stance.) He sticks to the incoming strikes and uses the defensive portion of An to neutralize the attacks down and to the sides of his body. Then he performs the offensive portion of An in a Double Push to the Defender’s chest.

The Defender shifts back and yields, using Peng to neutralize the Push. (Figure 32) He then converts the Peng into Single Whip by following his opponent’s left arm with his right, shifting forward and striking at the chest. Simultaneously he Sticks to the Attacker’s right arm with his left arm using Na to keep it from becoming a threat. (Figure 33.)

The key points in both movements 32 and 33 are:

Neutralizing the Defender’s strike to the chest at the end of Single Whip is tricky, the strike is short range and very quick. The Attacker has to have his wits about him.

Feeling the incoming strike; the Attacker presses on the Defender’s arm, controlling the elbow of the striking arm. (Figure 34/35) (If you move past the elbow towards the wrist of the striking arm the Defender can Fold at the elbow and use Tso or Elbow stroke. Stick to or slightly above the elbow.) Pressing on the attacking limb allows the Attacker to yield and lead the attack across his torso. Stances don’t change but the Attacker turns into his right/forward hip joint creating space for him neutralize the blow.

(Realistically at full speed and power the Attacker will probably get tagged, but by neutralizing he minimizes the amount of damage he will take. Also if the Defender isn’t paying attention the choreography could be discarded enabling the Attacker to change the outcome of the exchange.) 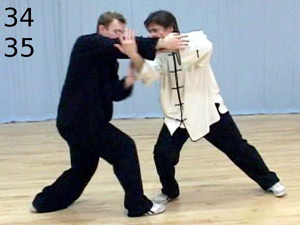 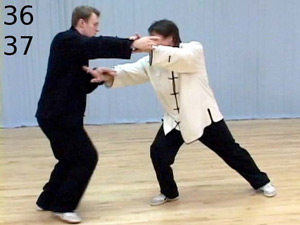 The key points here are:

Movement 36 Follow the Posture and Push and Movement 37 Neutralize and Strike with Right Palm.

Here the Attacker senses the File attack and continues the Push against the Defender’s elbow to stop the File, while attempting to Seal the defender’s right arm against his torso. The Defender yields to and neutralizes the Push by shifting back and manifesting Peng in his upper body; seizing the moment the Defender palm strikes again at the Attacker’s sternum. (Figure 36/37)

The defender is in a bad spot, he is being pushed back over the attacker’s knee, about to fall on his butt. The defender gets to do something pretty tricky to get out of this situation.

A very elegant counter and one of my favorite movements from the Fighting Set since Peng is used defensively to counter the takedown and to provide the platform that begins the Tso elbow strike. A good example of how Peng is the ubiquitous energy. 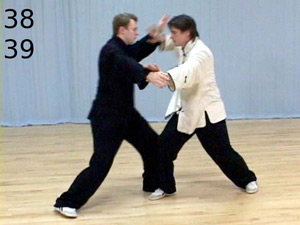 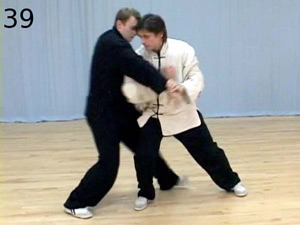 As you can see from the comments I made above there are many layers to the Fighting Set and it can take a while to get a handle on it’s subtleties. One of the more interesting things that came out of some of the discussions we had during the weekend was how useful it was to let your partner finish his technique. Allowing the technique to run its course lets the feeling of what is going on in that moment to crystallize. There have been lots of times in my practice and when I teach when I said,” If he gets to this point in the technique, you are all done.” Whether we were talking about qin na or takedowns or just finding the correct angle to attack. So I like lots of other people I’m sure I built the habit of never allowing partners to finish what they were doing. It was very useful during our time that weekend working on the Fighting Set to occasionally get to finish something. More importantly though was the feeling I got when I was receiving the technique. Since we were operating at a reasonable speed I could find the point in time when I could no longer counter what was going on. So later when we returned to the normal choreography of the event I had a much better sense of the timing necessary. So I suggest that you try letting things finish from time to time as you practice.

I have practiced the Fighting Set for a long time now and taught it on numerous occasions. Like many things in the martial arts there are tiers to the experience of the Fighting Set. I am coming to understand a layer beneath the choreography of the routine, cracking the code perhaps to get at another meaning for the material. Nothing in such a sequence happens by accident. Things were put there for a reason. The things that I am noticing now coiling, Na, and a great emphasis on the use of Pluck are the pieces of a bigger puzzle. These details make studying Taijiquan endlessly fascinating. More importantly they make the art practical because they answer the question of how a taiji player can fight. I hope at some point you get to try the Fighting Set it is a blast. Maybe we can do it together sometime.

Jeff Pratt began his study of Taijiquan at YMAA Boston in 1987 and has reached the rank of Instructor (3rd degree) in the YMAA system. He specializes in Pushing Hands, which is advanced two-person practice in Taijiquan. Jeff is also a disciple of Dr. Yang, Jwing-Ming. He has had extensive training in the spectrum of disciplines comprising YMAA's Taijiquan program.Jeff has been teaching Taijiquan professionally since 1992 and is currently teaching Pushing Hands at YMAA Boston, YMAA International headquarters. He has also taught before at the Tai Chi Farm (hosted by Master Jou, Tsung-Hua in New York), at Gillette Industries, and at Sapient Corporation. He has conducted seminars in the United States, Poland, Hungary, Portugal and South Africa. Jeff has participated and won local and national tournaments.