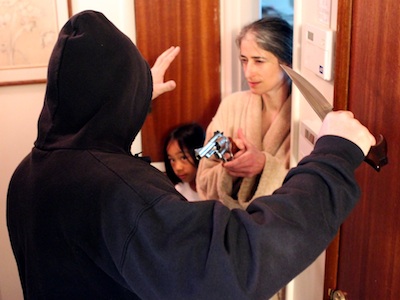 Gary Fadden was a salesman for firearms manufacturer Heckler & Koch. On February 24, 1984, he and his fiancé were driving their Ford pickup along Route 50 in Virginia. This was before cell phones became ubiquitous and he had no communication device inside his vehicle.

Gary Fadden was a salesman for firearms manufacturer Heckler & Koch. On February 24, 1984, he and his fiancé were driving their Ford pickup along Route 50 in Virginia. This was before cell phones became ubiquitous and he had no communication device inside his vehicle. But he had a competitor’s rifle, a Ruger AC556 (the selective-fire, or colloquially “fully automatic” version of the .223 caliber Mini-14 carbine) that he planned to test as part of his job, in his truck that day.

While driving, Gary was cut off by two guys on a motorcycle and had to slam on the brakes to avoid an accident. Shortly thereafter he noticed a Chevy pickup with three passengers—two men and a woman—following closely behind him. Strangely, one of the male occupants suddenly began gesturing for him to pull over. Since he didn’t recognize the folks in the Chevy, he ignored them. Until he suddenly realized that the passenger was waving a knife. And the driver had a gun.

He turned to his fiancé, saying, “We’ve got a bit of a problem here.” Bit of an understatement, that, as things turned out.

As they entered Middleburg, a small town of perhaps 800, and came to a stop at a red light, the two men exited their truck and ran toward Gary’s vehicle. One guy’s hand was on Gary’s door handle when he decided to run the light to escape. Unfortunately, the other guys jumped back into their Chevy and gave chase. Gary quickly accelerated to 95 miles an hour, but his vehicle’s speed governor kicked in, keeping him from going any faster, so he was unable to elude the pursuing vehicle.

Unable to call for help, Gary desperately looked for a policeman he could flag down but didn’t spot any patrol cars in the area. The chase continued for 22 miles, until they began to approach Chantilly Road and the H & K factory where Gary worked. Recognizing the location, he quickly planned to use his pass card to get through the plant’s security gate where he could get into a building and find a phone to call for help. Unfortunately, the automatic gate mechanism took too long to open, so the pursuers caught up. One of them began to exit his vehicle before Gary could get through the gate. The nearest building was too far away.

Grabbing the Ruger, Gary told his fiancé to get down on the floor of the Ford. He threw open the door and stepped out where he was confronted by one of his enraged pursuers. The guy was average size, wearing ratty clothes, with stringy hair and a long beard.

Gary had never fired the Ruger. He knew how to disengage the safety, but was not sure which position the fire-control lever was set to, semi-automatic, three-shot burst, or fully automatic. He pointed the muzzle upward and fired a warning shot only to discover that the rifle was set on full auto. It ripped off nine shots before he could get his finger back off the trigger. Shockingly, this had no effect whatsoever. The bad guy kept closing. Fast. And he was carrying knives in both hands.

This time Gary aimed at the bad guy, firing six shots with one pull of the trigger. His assailant fell to the ground dead. Then the other guy tried to run him over. Moving quickly, got behind a brick planter to escape the onrushing Chevy. The pickup skidded to a stop and the driver bailed out.

“F**k you! You killed one of the brothers! You shot him, you motherf***er,” the guy screamed.

Gary’s was prepared to fire again, but instead of using his revolver, the other guy looked like he was trying to hide it in his truck. Suddenly Gary realized why. The police had arrived.

But the incident wasn’t over. Not by a long shot.

As it turned out, the Chevy driver was an outlaw biker who went by the name “Papa Zoot.” He was unarmed when the cops arrived, but officers found two pistols in his truck, a .22 semi-automatic and a .357 Magnum revolver. The revolver had three live rounds and three empty cartridges in the cylinder. More spent brass was on the floor of the pickup, and a bag full of ammunition was open on the seat. Although no bullets struck his vehicle and he hadn’t heard any shots, Gary was certain that the bad guys had been shooting at him during the chase.

The dead guy’s name was Billy “Too Loose” Hamilton, another biker. Two knives were found on his corpse. Toxicology results from his autopsy showed that he had a .19 blood alcohol level when he died. He was hit by all six rounds that Gary fired, but he flinched away from the gunfire such that one bullet struck him behind the lateral midline, taking out a chunk of his spine.

You’d think that Gary had a pretty strong case for self-defense, right?

But, Gary was arrested that night. The charge? First-degree murder.

He was vilified by the prosecution for “shooting Hamilton in the back.” The press picked up not only on this point, but also on the fact that he’d used a fully automatic weapon.

The politics surrounding his case were ugly enough, but Gary soon discovered that Papa Zoot had purchased a .30-06 rifle and sworn a “blood oath” to kill him and his family.

At his trial, the prosecution brought Gary’s attackers in to testify against him. They claimed that he’d tried to run over their biker brother, the guy on the motorcycle who cut him off earlier that fateful day, and that they’d chased him 22 miles trying to get his license plate number. They said that he’d tried to kill them, not the other way around. (Gary had all the proper permits; it was perfectly legal for him to possess the rifle.) The prosecutor made such a show of waving the machinegun around that the judge had to go out of his way to instruct the jury that the weapon used had nothing whatsoever to do with whether or not the shooting was self-defense.

When the jury found Gary not guilty on all counts, the prosecutor shouted, “You’ve let a murderer loose!” in open court. In front of Gary’s mother.

While Gary was ultimately exonerated, the bill for his legal defense was more than $45,000 (equivalent to over $100,000 today). It was eight years before he was able to pay everything back.

Self-Defense Is An Affirmative Defense

Level 6 is extraordinarily serious. If you are at this level, odds are good that someone is going to die. It could be you. And whoever lives, be it you or your adversary, is almost certainly going to jail. If convicted, that person will be doing hard time in prison.

Any blow delivered powerfully and deliberately to a vital area of the body could be construed as deadly force so long as it can be shown that it was struck with the intention, or predictable likelihood, of killing or maiming the other guy. Expect to be prosecuted for it. In Washington State, the definition of deadly force is “The intentional application of force through the use of firearms or any other means reasonably likely to cause death or serious physical injury.” Sounds a lot like Level 6 huh? This means that you are committing a felony. At a minimum, it is aggravated assault. More likely it’s murder…

We have beaten you over the head with this detail already, but it bears repeating. Self-defense is an affirmative defense. You are admitting to the elements of a crime but offering an acceptable legal excuse for doing so because the threat had the intent, means, and opportunity to kill or grievously injure you or a third party, and preclusion was out of the question at the time. Further, you did not contribute in any way to the situation you found yourself in. A cornerstone of legitimate claims of self-defense is the innocence of the claimant. If you allowed a situation to escalate when you could have walked away (à la monkey dance), you’re screwed even if the other guy pulled a knife or a gun before you took him out.

It is vital to understand that Level 6 encounters carry supreme risk. Even bringing a weapon into play will not automatically stop a determined aggressor. Remember Jack Lucas, Matt Urban, and John Finn? It is exceedingly rare for a shooting victim to be stopped dead in his tracks by a single shot, even one to the head.

They had a saying in the Old West, “dead man’s ten.” It was a common experience for a gunfighter or knife fighter to continue the battle for another ten seconds after suffering a fatal wound. That was then; what about now? Have modern weapons changed anything? Not really. Loren Christensen wrote,

“I’ve had to fight guys even after they have been shot and they still fought like maniacs. I know of two occasions where suspects had been shot in their hearts and they fought the officers for several seconds before they crumpled dead to the ground… I saw two cases of people shot in the head—one person took five rounds—and they were still running around screaming and putting up a fuss.”

Mutual slayings are not all that uncommon at this level.

A defensive handgun instructor whose class Lawrence took reinforced this point, stating that it takes a fatally wounded person between 10 and 120 seconds to drop. You must expect a determined attacker to continue his assault even after he has been shot. Lawrence was taught to fire and move rather than stand in place as you might do on a gun range, staying vigilant until the threat was disabled and clearly unable to continue the fight.

It is even worse if you are unarmed. Justification for Level 6 includes an armed assailant or disparity of force. That means that if you’re operating here, you’re outgunned or outnumbered. Or both. With a weapon you may have a sporting chance. Without one, well it can be a roll of the dice…

This is Level 6 folks. And it sucks.

(In Scaling Force dynamic decision-making under threat of violence , the authors introduce you to options, from skillfully doing nothing to applying deadly force.  They realistically guide you through understanding the limits of each type of force. There are six levels, “Presence,” “Voice,” “Touch,” “Empty-Hand Restraint,” “Less Lethal Force,” and “Lethal Force.” This is an excerpt from Level 6, Lethal Force.)