Listen to the Subtle (and Not-so-Subtle) Warnings | YMAA
Skip to main content
FREE Shipping Order Over $70. (US Only, Conditions apply)    |   Up to 20% Off. Exclusions apply.

Home >> Articles >> Listen to the Subtle (and Not-so-Subtle) Warnings 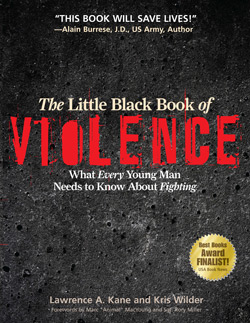 Listen to the Subtle (and Not-so-Subtle) Warnings

We’ve spent much time writing about awareness on the street. It’s important in relationships too. Don’t turn your brain off when you walk into your home.
The following is an excerpt of The Little Black Book of Violence (click to preview or buy)

We've spent much time writing about awareness on the street. It's important in relationships too. Don't turn your brain off when you walk into your home. After all, according to the Bureau of Justice Statistics, more than half of all homicides are committed by someone known to the victim. That means that your wife or husband, girlfriend or boyfriend, sister or brother, friend, relative, or acquaintance might just do you in someday.

The song You Don't Love Me Anymore by Weird Al Yankovic leads into the first chorus with the lyrics:

"Why did you disconnect the brakes on my car?
That kind of thing is hard to ignore
Got a funny feeling, you don't love me anymore"


After several verses describing increasingly horrific behaviors from his no-longer-in-love girlfriend, including things like telling all her friends that he's the antichrist, pushing him down an elevator shaft, and slamming his face onto a hot BBQ grill, Yankovic drops the line:

"You're still the light of my life
Oh darling I'm begging, won't you put down that knife"

Yankovic is a world-class comedian, a truly funny guy. As with most of his material, this song is hysterical, at least for people who haven't lived through domestic violence? Sadly, what he jokes about in the song is all too true in some relationships. Little hints become bigger hints; small behaviors turn into larger ones. And if you don't pay attention to the clues, something bad inevitably happens.

Case in point: "She took a fishing knife out of his tackle box and stabbed him seven times in the chest. Killed him," Wilder's business partner, Rick, told him over the phone. "What, you mean your painter, Jeff?" Wilder asked. "Yep," Rick replied, "Stabbed him last night while he slept."

Jeff was a good employee. He was on time, had a talent for painting cars, and he loved the outdoors. Jeff's girlfriend, on the other hand, was wild. She was a real knockout, but had little control over her emotions. In fact, the police had been to their home several times, especially on the weekends. She had even been sentenced to jail for assaulting him before.

Sadly, Jeff never stood a chance that night. While he peacefully slept, she went into his tackle box and pulled out a boning knife, symbolically taking from his favorite pastime: fishing. The blade was sharp and light with a long, tapered point, and a keen edge. She crept into their bedroom, held the boning knife high over his chest, and thrust it downward into his heart with both hands. Then she pulled it out and slammed it in again… and again, and again, and again, and again, and then once more for good measure. And then she left the house. 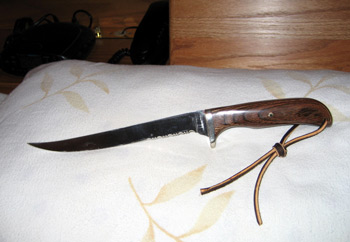 Everybody who had ever met Jeff liked him. He was pleasant, easy to know, and honest. Anybody that met the two of them, however, had difficulty understanding their relationship. While everyone was saddened by what had happened, it didn't really take anyone all that much by surprise. In fact, not too long before the incident someone had joked, "I hope she's really good in bed man, because you know she's gonna do you in one day." All the hints were there, the warnings loud and clear, yet Jeff did not heed any of them. Now he's dead.

Domestic violence can go both ways, yet more often than not it's the guy who is the abuser. In fact, between 1976 and 2004, more than thirty percent of female murder victims were killed by their husband or boyfriend, a rather substantial number when you realize that less than ten percent of male victims were killed by an intimate over that same period. That's why we have so many battered women's shelters, victim advocates, and community resources that focus on helping women and children move away from hazardous relationships.

It might not happen as often, or at least not be reported as much, but men are definitely abuse victims too. More than 100,000 men are violently assaulted or killed by their wives or girlfriends each year in the United States.

Here are some warning signs of abusive relationships that apply to both sexes, reliable predictors of eventual violence or murder:

One of the most important things a domestic abuse victim can do is get away from the perpetrator before things get worse. Danger to the victim and any children or pets they might have, however, is likely to increase at the time of separation so you have to be careful about how you do it. Nevertheless, if you feel threatened in a relationship it is essential to take action right away. It is easy to rationalize or procrastinate, hoping that things will get better. Most of the time, however, they won't.

It can be tough to leave, but you must do it. You can work around economic issues such as loss of housing, income, health insurance, or transportation. It's a bit tougher, but you can work through emotional, cultural, religious, or family issues, too. You might even have heard horror stories of health care providers, law enforcement officers, social workers, or even the courts blaming the victim, particularly when he's a guy, but those things are rare and a good lawyer can help you work through them.

Don't be embarrassed to death. Leave. There are plenty of resources to help you do the right thing and keep yourself safe. In most communities, there are both government and private agencies that can help you work through these issues, providing relocation, temporary housing, medical assistance, and attending to other needs as appropriate.

Listen to all the little warnings you get, not only around strangers on the street, but also in relationships as well. Little hints become bigger hints; small behaviors turn into larger ones. And if you don't pay attention to the clues, something bad is bound to happen. While women are often on the receiving end of domestic abuse, men can be victims as well (for example, John Wayne Bobbitt). The most important thing you can do if you are in an abusive relationship is to get away from the perpetrator immediately before things get worse.

There are some very interesting differences between men and women when it comes to fighting that can also become important in dysfunctional relationships. For the most part, men have "hot" rage. If they're going to lash out violently, it will be in the heat of anger. Women, on the other hand, tend to have "cold" rage. They're the ones who will take revenge long after the incident that enflamed them has passed, quite possibly after you've forgotten all about the argument, indiscretion, or whatever it was that occurred.

Since female-on-male violence can be harder to predict, subtle warning signs must be heeded. Women are more likely than men to get you while you sleep, stabbing you in the chest, setting you on fire, or putting a bullet in your head. They are the ones who might cut off your penis and throw it out the window of a moving car (Lorena Bobbitt, 1993) or flush it down the toilet (Kim Tran, 2005). If you are truly unlucky, she might become enraged, tear off your testicle with her bare hands, and try to eat it (Amanda Monti, 2007). 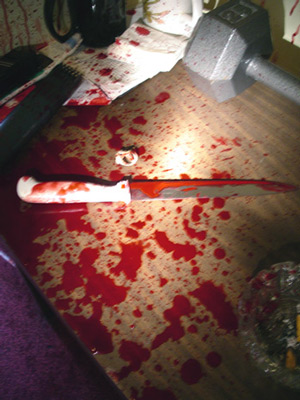 Since female-on-male violence can be harder to predict than vice-versa, subtle warning signs must be heeded. Photo courtesy of Al Arsenault.


One of the factors that may influence these differences between men and women is in the way in which adrenaline affects the genders. When men are confronted with extreme emotional or violent situations, their adrenaline kicks off like a rocket, surging quickly and the dissipating rapidly afterward as well. In a home invasion situation, for example, when the male homeowner shoots the suspect, the killing is likely to take place near the front door. When police officers arrive, they will typically find that the suspect has been shot perhaps two or three times, just enough to make sure he's no longer a threat.

Women, on the other hand, get a much slower, longer lasting adrenaline surge. It takes longer to get going and dissipates a lot more slowly than you find in men. In that same home invasion scenario, police often find the dead robber in a back bedroom where he had chased and cornered the female homeowner. But here's the kicker. Rather than shooting him a couple of times she's emptied the gun into him, perhaps even reloading and doing it again. Interesting difference, huh?

"An individual can easily change his mind, so his movements are difficult to predict. You must appreciate this." – Miyamoto Musashi

Listen to all the little warnings you get. Intimates can be just as hazardous to your health and wellbeing as strangers. Little hints can become bigger hints; small behaviors turning into larger ones. Pay attention and be safe.