Introduction to Internal and External Jin | YMAA
Skip to main content
FREE Shipping Order Over $70. (US Only, Conditions apply)    |   Up to 20% Off. Exclusions apply. 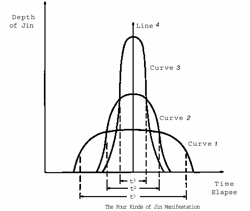 Introduction to Internal and External Jin

Introduction to Internal and External Jin (martial power)
Theory of Internal Jin (Power)
What is Internal Jin (Nei Jin)? It is the energy source of the power. What is Qi (energy) in the body? It is bioelectricity. What is the Yi (concentrated mind)? It is the source of electromotive force (EMF) in the body which creates electric potential difference. “The Yi leads the Qi”. When the Yi is strong, the EMF will also be strong, creating greater electric potential difference. This means that when the EMF is strong, the flow of bioelectricity will be strong. This the theory of Internal Jin. When the Qi (energy) flow is strong, the Jin manifested will be powerful.

From Ohm’s Law it is known that:
V = I x R
V= Electric Potential Difference
I= Current
R= Resistance

From this formula, it is known that the potential difference is proportional to the current(energy/Qi). That means, when the electric potential difference is bigger, the current is also bigger. That is, when the EMF is strong, the current is strong. In martial arts, EMF is generated by the concentrated wisdom mind (Yi). That means, when Yi is strong, the bioelectricity is strong. In order to have strong Yi, you should start from still meditation. From the practice of still meditation, the Gongfu of the Yi’s concentration can be trained. When the Yi is concentrated, the Spirit of Vitality is high and the EMF is strong; this is the first secret key to Internal Jin.

Though the energetic network in the human body is much more complicated than a regular electric network, Ohm’s Law can still be adopted to interpret the manifestation of Jin. When the mind is strong, the power manifested is more powerful and concentrated.

Taiji philosophy has existed for thousands of years. The word Taiji means ‘grand ultimate’. When the theory of Taiji is applied into the martial art Taijiquan, Taiji refers to your mind. The mind is the “Grand Ultimate” of the body. The mind can travel beyond the limits of space and time instantly. This mind is creative and powerful. And it is the mind that initiates and controls the body’s movement. Therefore, in Taijiquan, the cultivation of mind is always the first priority of training, and it is ultimately a vital aspect all martial arts training. The key to increasing the mind’s power and concentration is through still meditation.

Taijiquan is commonly called “moving meditation” in Western society. The reason for this is that when you practice Taijiquan, you are using your concentrated mind with a sense of enemy against an imaginary opponent to lead the Qi to the arms and legs for the Jin’s manifestation. In order to lead the Qi effectively with the mind, the body must be relaxed, loose, and soft. Only then can the Qi circulate without stagnation. The key to keeping the body loose and soft is maintaining movement and agility in the joints. Only then can the Jin be initiated by the legs, controlled by the waist, shaped by the chest and spine, and finally manifested at the hands. Without a relaxed and soft body, internal arts such as Taijiquan lose their meaning and basic principles, and cannot be called internal arts any more.

“Reverse Abdominal Breathing” is a natural way of breathing which we use to manifest power physically. Whenever you wish to manifest your energy into physical power, to push a car or lift a weight for example, without thinking you change your breathing from “Normal Breathing” to “Reverse Abdominal Breathing.” If you wish to enhance the power manifestation to a higher level, you must also know how to open the Mingmen (Gv-4) cavity and lead the Qi upward along the spine and then out to the arms through the Dazhui (Gv-14) cavity. After practicing for a long time, it will become a habit, and you will lead the Qi through the limbs as needed, resulting in stronger martial power (jin).

Theory of External Jin (Power)
What is External Jin? It is the external manifestation of Internal Jin. The effectiveness of manifesting external Jin is not only affected by the strength or weakness of the Internal Jin, but also by the physical structure and the skills of manifestation. The efficiency of the external Jin’s manifestation depends on how the hands act, the eyes’ manner, how the body moves, actual fighting skills, and stepping methods. Consequently, Jin can be categorized as hard Jin, soft-hard Jin, and soft Jin. There are some styles whose external Jins are initiated from the legs, such as Shaolin Long Fist Kung Fu and Taijiquan. There are some styles whose external Jins are initiated from the waist, such as White Crane Kung Fu. Furthermore, there are some styles whose external short Jins are initiated from the four limbs. You should understand this concept no matter what style martial art you train. The emitting of external Jin depends on how the Jin is stored in the bows and emits from them. It is said there are five bows in Taijiquan. These five bows are the two arm bows, the two leg bows, and the body bow, or torso. Other styles such as White Crane, which specializes in soft-hard Jin, say the body is equipped with six bows. For six bows, other than the four bows of the arms and legs, the body (torso) includes two bows: the chest bow and spine bow. The spine bow is vertical and the chest bow is horizontal.

There are five basic elements that influence how the Jin is manifested and how the fighting skills are carried out. These five elements are: hands (Shou ), eyes (Yan ), body (Shen ), techniques (Fa ), and stepping (Bu ). In other words, achievement depends on how the Jin is manifested in your hands, the level of alertness and awareness of your being (which usually corresponds to the eyes), how your body stores the Jin in its structure, how the techniques are executed, and your skill and firmness in stepping. From all of these factors, thousands of styles were created and developed and discriminated into hard, soft-hard, and soft styles. Consequently, the manifestation of Jin is also distinct from one style to another.

Opening the bow stores the Jin; releasing the bow emits the Jin. The effectiveness of releasing the bow depends on how skillfully the bows are opened. As we discussed in the previous article, the storage of Internal Jin depends on the Yi, Qi, and breathing. The storage of External Jin is decided on when your root is firmed to the ground, and also how the six bows are opened. This means the body’s skills or postures of storage. The efficacy of the External Jin’s expression depends on the sharpness of the Jin-Li, or focus and the speed. Therefore, all styles have their own training methods to strengthen the storing power of their bows so as to increase the speed and to improve the sharpness of the Jin-Li. Because Jin is the key in winning and losing, every style has historically kept its training methods secret. However, the most important key to the Jin’s emitting and neutralization is the unification of internal and external. That means that through harmonious coordination of internal and external Jins, the Jins are manifested from internal to external.

In order to manifest Jin powerfully, you must first have a firm root. This is especially true for those styles that use the root to initiate the Jin. You must also know how to draw the bows properly so the Jin’s storage can reach its highest level. This is no different from throwing a javelin in an Olympic competition, or hitting a golf ball. If you know how to store the Jin in all six bows efficiently, the spear you throw will go far. It is because of this that all Chinese martial arts styles have their own training methods in storing the Jin, and this is usually kept top secret. A good method of training can not only make your Jin’s manifestation more powerful, but can also shorten the training time. Naturally, though the training methods are different, the Dao (basic theory and principle) remains the same for all styles. This Dao is the unification of internal and external.