Taijiquan Pushing Hands | YMAA
Skip to main content
FREE Shipping Order Over $70. (US Only, Conditions apply)    |   Up to 20% Off. Exclusions apply. 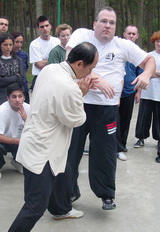 Almost every Chinese martial style, both external and internal, has its own hand-matching training similar to Taiji's pushing hands.

Almost every Chinese martial style, both external and internal, has its own hand-matching training similar to Taiji's pushing hands. In southern external styles it is commonly called Bridge Hands or Coiling Hands, while in northern external styles it is called Folding Hands or Opposing Hands. Although the names are different, the purposes are the same. The techniques trained and emphasized by each style reflect the essence of that style, and are usually kept secret to prevent other styles from copying them or learning how to counter them. Once a student is accepted as a legitimate student and is taught these exercises, he has begun the serious study of his style.

In Taijiquan, there are also many styles of pushing hands, since almost every different Taiji style has its own emphasis. Some styles are extremely soft, and therefore emphasize only the soft Jins (power emission). Other styles emphasize harder Jin training, which tends to be more easily accepted by beginners. Some styles stress high postures and a small defensive circle while others emphasize low postures and a large circle. Even in the same Taiji style, there are often differences from master to master, according to their emphasis and understanding.

You may start pushing hands anytime after you finish learning the solo sequence, and it should be part of your training for as long as you practice Taiji. You learn to sense and follow your partner without resisting, so that you ultimately understand his strength and use it against him. Pushing hands also gives you a chance to practice the applications of the techniques, which increases your understanding of the sequence. Without such understanding, the sequence remains “dead”.

Doing Taiji without pushing hands is like buying a car and not learning how to drive. Pushing hands teaches you how to drive in a parking lot. However, even if you can drive skillfully in this lot, it does not mean you are capable of driving on the freeway or in the city. In order to be able to "drive in real traffic," you must also learn the two-person fighting set and free fighting. The fighting set was designed to give fighting experience which resembles real fighting. This is like driving your car with an instructor's supervision. The last stage, free fighting, is your solo driving in traffic.

In pushing hands, the first step is to build up your sensitivity in the sensing Jins - Listening Jin and Understanding Jin. These two Jins are the foundation of all Taiji martial techniques, and are developed through the practice of Adhere-Stick Jin. Until you can "hear" (through feeling) and understand the opponent's Jin, you will not be able to understand his intention and power, and will not be able to fight effectively.

After you have grasped the tricks of Listening and Understanding Jins, the next step is to learn how to neutralize, lead, and control the opponent's Jin. Once this is learned, you will be able to react with the various offensive Jins as appropriate to the situation. Naturally, during all your practice you should not forget the fundamentals, such as keeping your body centered, comfortable, and steady, otherwise you will lose your balance. You must also remember to coordinate your Qi (energy) with your Jins.

Utilizing the ‘Hen’ and ‘Ha’ sounds is very important in Taiji martial applications, and play a major role in raising the Spirit of Vitality and stimulating the Qi to reach further and increase in strength. Also, Taiji ball training is often used in the internal styles to train Listening and Understanding Jins It is also used to train adhering and sticking while doing the circular advancing and retreating motions which are required in the internal martial arts.

At first, the student should learn the basic exercises which are the key to the door of the secret of pushing hands. They will help you to understand and develop your skill at Listening, Understanding, and especially Neutralizing and Leading Jins.

Once you have mastered all of these basic exercises, you should practice the techniques corresponding to the eight directions, and learn how to coordinate them with your footwork according to the principles of the five elements and the eight trigrams. With this training you will be able to understand the principles and general rules of pushing hands, and lay a foundation which will enable you to research and study further. Finally, a student will train the martial applications of pushing hands techniques. These will build a foundation which will allow you to begin learning from the from the 88-posture two person fighting matching set.

There are a number of important principles you should always remember and follow when practicing pushing hands. Read the ancient poetry and songs of the Taiji Classics regularly throughout your training, because they can teach you both key principles and ideas for training. Theory and practice continually reinforce each other, so your ability and understanding will benefit from repeatedly reading and pondering these written records of the masters.

Here are three selections from the Taiji Classics which are concerned specifically with pushing hands.

Wardoff (Peng), Rollback (Lu), Press (Ji), and Push (An) are rare in this world. Ten martial artists, ten don't know. If able to be light and agile, also strong and hard, (then you gain) Adhere-Connect, Stick-Follow with no doubt. Pluck (Cai), Split (Lie), Elbow-Stroke (Zhou), and Shoulder-Stroke (Kao) are even more remarkable. When used, no need to bother your mind. If you gain the secret of the words Adhere-Connect, Stick-Follow, then you will be in the ring and not scattered.

Be conscientious about Wardoff (Peng), Rollback (Lu), Press (Ji), and Push (An). Up and down follow each other, (then) the opponent (will find it) difficult to enter.


No matter (if) he uses enormous power to attack me, (I) use four ounces to lead (him aside), deflecting (his) one thousand pounds.


Guide (his power) to enter into emptiness, then immediately attack; Adhere-Connect, Stick-Follow, do not lose him.


The Secret of Withdraw and Release

Third Saying: Relax Relax and expand my Jin, without bends.

Fourth Saying: Release When (I) release, the waist and the feet must be timed carefully and accurately.


This subject is further explored in the DVDs Taiji Pushing Hands Courses 1 & 2 and Courses 3 & 4.