Meditations on Violence | YMAA
Skip to main content
FREE Shipping Order Over $70. (US Only, Conditions apply)    |   Up to 40% Off. Exclusions apply. 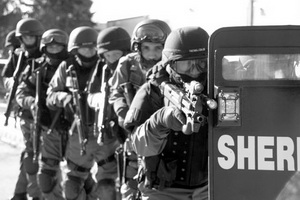 People are weird. They have an almost infinite ability to learn and communicate. At the same time, this amazing ability is used as much for fantasy and entertainment as it is for information and survival. Take, for example, the rhinoceros and the unicorn.

The rhinoceros is a real beast, an animal native to Asia and Africa. It is large, formidable, and familiar to most of us from pictures or visits to the zoo. What do we really know about rhinoceros? Are they grazers or browsers? Do they live in big herds, family groups, or roam the savannah alone? In the movie The Gods Must be Crazy, we learned that the rhinoceros doesn't like fire and will stamp out a campfire. Is that true? I have no idea. Look at how little we know, and how little we know with confidence, about this beast that really exists and is truly dangerous.

The unicorn derived from the rhinoceros. Over time and distance and by word of mouth, the reality of the rhinoceros slowly changed into the myth of the unicorn. This process has been so powerful that everyone knows many, many facts about the unicorn. It has the beard of a goat, cloven hooves, and a single horn. It kills elephants by impaling and is strong enough to hurl the elephant over its head, yet it can be tamed and captured by a virgin. We know all these "facts" about the unicorn, but there is only one true fact to know:

The unicorn is imaginary.

Unicorns are mythical, yet we know so much about them. The rhinoceros is real and, except for a few experts, we know so little.

There is a parallel between the unicorn and violence. Just as travelers' tales passing from person to person and place to place and century to century managed to morph the reality of the rhinoceros into the fable of the unicorn, the insular tradition and history of each dojo has morphed a primal understanding of violence into the modern ritual of martial arts. Just as the grey and wrinkled skin of the rhinoceros has become the glossy white coat of the unicorn, the smells, and sounds, and gut-wrenching fear of close-up personal violence has somehow spawned the beautiful cinema of the action adventure movie and the crisp precision of the martial arts.

In today's world, who are the real experts on violence?

The simple truth is that many of these experts, these priests of Mars, have no experience with violence. Very, very few have experienced enough to critically look at what they have been taught, and what they are teaching, and separate the myth from the reality.

The Super Star. Do you ever notice that weight lifters don't look like boxers? For that matter, if you watch fencing matches you see a lot of tall skinny guys, Judo matches tend to be won by short, stocky judoka—basically, none of them look like body builders. But action stars usually do. Unless they want to appeal to the goth/techno market, in which case they are really skinny, pale-complected, and wear a lot of black.

The idea is the same—pretty sells. In the media world, everything is about attraction. The fighters look pretty, not the gnarled, scarred up, sometimes toothless fighters that I know. The fights look pretty, too—you can actually see the action and even identify specific techniques.

They are paced for dramatic content. A movie fight doesn't end when the hero or villain would naturally be lying in a pool of bloody vomit, clutching his abdomen and gurgling. It ends at the moment the director thinks the audience is hyped and not bored yet.

Even when they try to be realistic, it's about the spectacle. The very fact that the camera can see what is going on is unrealistic. In smoke and dust and rain and the melee of bodies or the flash of gunfire, the person right in the middle of it can't reliably tell what is going on.

And the fighting caters to the audience's idea of fair. It's almost always a close fight to the very end, won by a slim margin…I'll tell you right now that as a public servant who runs a tactical team if I ever, ever play it fair, if I ever take chances with my men or hostages in order to cater to some half-assed idea of fair play, fire me. Fair doesn't happen in real life, not if the bad guys have anything to say about it and not if the professional good guys do, either. I always wanted to see a movie with Conan talking shit in a bar and looking down to see a knife sticking out of his stomach with no idea how it got there.

The Story. Maybe this is a metaphor, maybe it is a model: Things are what they are. Violence is what it is. You are you, no more and no less—but humans can't leave simple things alone.

I present this as a warning. You are what you are, not what you think you are. Violence is what it is, not necessarily what you have been told.

You can read more about this subject in Rory Miller's new book "Meditations on Violence".