Mob Violence Is An Eruption With No Warning | YMAA
Skip to main content
FREE Shipping Order Over $70. (US Only, Conditions apply)    |   Up to 20% Off. Exclusions apply.

Home >> Articles >> Mob Violence Is An Eruption With No Warning 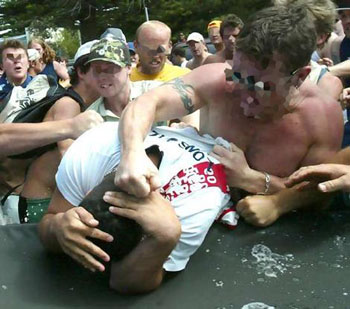 Mob Violence Is An Eruption With No Warning

Gang violence gets a fair amount of copy in the media. But another form of violence is mob violence.  Mob violence rises up, explodes, and then recedes.

Gang violence gets a fair amount of copy in the media. But another form of violence is mob violence.  Mob violence rises up, explodes, and then recedes.

Gang violence is actually quite simple, the codes of conduct are clear. When we see or hear of gang violence, we generally recognize the motivations. The level of violence in this category is predictable, steady, and ongoing. Not so with mob violence. This is a type of violence that seems to erupt from nowhere with no warning and little explanation.

A great example of this is an instance involving a large group of bicycle riders in Seattle called Critical Mass that once a month slows, or stops traffic to demonstrate that they have as much right to the roads as cars. Critical Mass believes their values are superior and they intend to impose those values through traffic slowdowns and blockages. In their collective mind, their superior values, supported by their mass allowed some members of Critical Mass to destroy a man’s car and put him in the hospital. You can read the article at the Seattle Times webpage.

Members of Critical Mass felt compelled to demonstrate their commitment to the cause by becoming unhinged. The people that committed these acts of violence were gaining membership credibility by doing things they would never do on their own. They would never hit another person in the head with their bike lock in line at the bank. Yet the desire to gain membership credibility released them to destroy a man’s car and crack his skull with a bike lock.

Now think about the symbolism involved here.  The car tires were slashed, a direct act correlating to the group’s intent to slow or stop traffic. Touching of the face is either an act of intimacy or dominance so the striking in the head of the car driver with a bicycle lock is a symbol of bicycle dominance. If that is not buying credibility, then what is?

The formula is simple: a situation involving a group of people with shared values gathered in sufficient mass allows others to use extreme behavior to gain group credibility.

Now that formula has a high probability for violence, and that violence will all be justified, every last little bit of it. How far can the justification of mob violence go? In 1096 A.D. at the city of Ma'arrat al-Numan, crusaders put children of vanquished combatants on spits, roasted and ate them. And nobody went to jail, not as far as I know. The symbolism of killing your opponent and eating their future should not be lost here either.

Now if you ask members of Critical Mass, they may tell you they were protecting themselves and that slashing the tires of the car, cracking a man’s head open with a bike lock, shattering his windows, and bashing in the hood of his car, were all justified actions, but they are lying to themselves.  The human mind can justify any, and I mean any, act of violence, history proves this fact.

Violence can appear to have no reason, and come in many shapes, but the cocktail of anger, perceived justification, a need to belong, and tacit group acceptance means that this day violence did not come dressed in gang colors; it came from next door in bike shorts and an oddly shaped Day-Glo helmet.