Never Surrender | YMAA
Skip to main content
FREE Shipping Order Over $70. (US Only, Conditions apply)    |   Up to 20% Off. Exclusions apply. 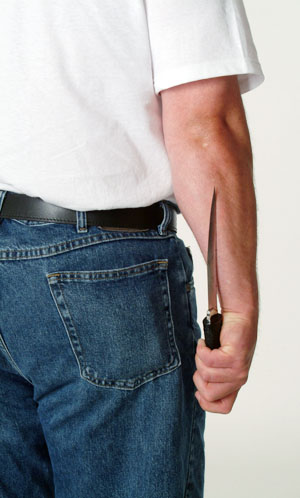 The goal of self defense is not to win a fight, but rather to avoid combat in the first place. After all the only battle you are guaranteed to walk away from unscathed is the one you never engage in. Taking a beat-down can seriously mess up your life, yet winners have consequences too.

The goal of self defense is not to win a fight, but rather to avoid combat in the first place. After all, the only battle you are guaranteed to walk away from unscathed is the one you never engage in. Taking a beat-down can seriously mess up your life, yet winners have consequences too. Beyond the potential for physical and emotional scars there are a host of other issues to address including interacting with law enforcement, finding a good attorney, navigating the legal system, fending off ancillary civil suits, and so on.

Awareness, avoidance, and de-escalation skills are the cornerstones of self defense. They can stave off most violence before it begins, either by circumventing the need to fight altogether or by removing the underlying cause of conflict by giving your adversary a face-saving way out. Nevertheless, sometimes despite your best intentions you may find yourself in a situation where there really is no alternative but to fight. When it comes to such circumstances, you absolutely cannot stop until it's over.

Once engaged in battle it is critical to remain mentally and physically prepared to fight or continue a brawl at a moment's notice. Always keep your opponent in sight until you can escape to safety. Even if your blow knocks an adversary to the ground, remain alert for a possible continuation of his attack. Most fistfights end when one combatant gives up rather than when he or she can no longer physically continue. Weapons bring a whole new dynamic into play. Even fatally wounded adversaries do not always succumb to their injuries right away; they can continue to be a critical danger for several seconds if not minutes.

Never give up until you are sure that you're safe. Sadly, too many victims do not heed this lesson with tragic results. For example, on January 1, 2008 Meredith Emerson, a 24-year-old University of Georgia graduate, managed to fend off both a knife and a baton attack, holding her own until her assailant tricked her into surrendering. Gary Michael Hilton, a burly 61-year-old drifter, subsequently tied her up and carried her to a remote location where he raped and eventually killed her three days later.

Hilton reportedly told police interrogators that his petite victim nearly overpowered him when he first accosted her on an Appalachian hiking trail. According to published reports, Hilton stalked the 5-foot 4-inch tall, 120-pound woman on the trail but was unable to keep up so he laid in wait and intercepted her on her way back down. He pulled a knife and demanded her ATM card. Emerson, a trained martial artist, recognized the threat and immediately fought back.

"I lost control, and she fought. And as I read in the paper, she's a martial artist." Emerson, who held middle kyu ranks (blue belt and green belt) in two different martial arts, ripped the knife out of his hands. He countered with a baton that she was also able to pull from his grasp. As the struggle continued, they fell down a steep slope, leaving both weapons behind. "The bayonet is probably still up there," Hilton later told investigators.

"I had to hand-fight her," Hilton said. "She wouldn't stop fighting and yelling at the same time so I needed to both control her and silence her." He kept punching her, blackening her eyes, fracturing her nose, and breaking his own hand in the process. He figured that he had worn her down as they moved farther off the trail, but suddenly she began fighting again. He finally got her to stop by telling her that all he wanted was her credit card and PIN number.

Once she relaxed her guard, he restrained her hands with a zip tie, took her to a remote location, and tied her to a tree. Predators often take their victims to secondary crime scenes where they have the privacy to perform their depravations. Sadly this was no exception. He kept her captive in the wilderness for three terrifying days before telling her that he was ready to let her go. Then he beat her to death with a car-jack handle and cut off her head.

Hilton made a plea deal with prosecutors, leading investigators to his victim's remains so that they would not seek the death penalty for his crimes. He was subsequently sentenced to life in prison with the possibility of parole after 30 years.

As this tragedy points out, never believe anything an assailant tells you. His (or her) actions have already demonstrated beyond any doubt that he's a bad guy. Do not relax your guard and get caught by surprise; that is a good way to die. If the other guy thinks that he's losing, he might be more inclined to play possum or pull out a weapon in order to cheat to win. Worse yet, street attacks often involve multiple assailants, many of whom are seasoned fighters who know how to take a blow and shrug off the pain. Be mindful of additional assailants, potentially latecomers, and be prepared to continue your defense as long as necessary.

As the Chinese proverb states, "Dead tigers kill the most hunters." Remain vigilant during any pause in the fight. You may be facing multiple assailants, an adversary who pulls a weapon in the middle of a fight, or an opponent who just won't quit. Once you have removed yourself from the danger and are absolutely certain that you are no longer under threat you can safely begin to relax your guard.