Occasionally Hollywood Can Actually Teach You Something | YMAA
Skip to main content
FREE Shipping Order Over $70. (US Only, Conditions apply)    |   Up to 20% Off. Exclusions apply.

Home >> Articles >> Occasionally Hollywood Can Actually Teach You Something 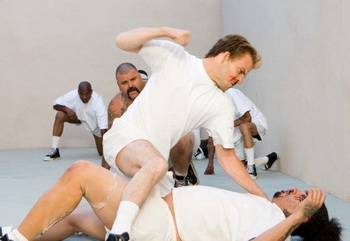 Occasionally Hollywood Can Actually Teach You Something

Recently I watched "Felon", a movie that makes some realistic and valuable points about self-defense. In most jurisdictions a person can only resort to deadly force to escape imminent and unavoidable danger of death or grave bodily harm.

Recently I watched "Felon", a movie that makes some realistic and valuable points about self-defense. The story centers around an average guy named Wade Porter (played by actor Stephen Dorff). Porter, his fiancé, and young son have just moved into their first house. After years of struggling for success, his construction business is beginning to take off, they have gotten their finances in line, the marriage ceremony is rapidly approaching, and life is good. Of course this happiness doesn’t last…

One night an intruder breaks into their home and everything changes. Porter hears a noise, finds a guy in his son’s bedroom, chases him outside, and smacks him in the head with a baseball bat, killing him. Since the burglar was unarmed and died outside the home where castle doctrines do not apply, Porter is sentenced to three years for involuntary manslaughter.

As the movie progresses, Porter soon realizes that he has lost everything over a split-second decision. The movie teaches some valuable lessons. Chasing down an unarmed intruder who’s hell-bent on escaping and attacking him is clearly not self-defense, not even in Hollywood. In fact, in most jurisdictions a person can only resort to deadly force in order to escape imminent and unavoidable danger of death or grave bodily harm. That “unavoidable” part is the bugger.

While legal definitions and interpretations are generally uniform across the country, there are differences from state to state. To stay out of jail, you need to talk to an attorney in your jurisdiction. I’m a martial arts instructor, not an attorney, so I can only provide some good guidelines. The classic rule is that self-defense begins when deadly danger begins, ends when the danger ends, and revives again if the danger returns. Neither a killing that takes place after a crime has already been committed, nor a proactive violent defense before an attack has taken place is legitimately self-defense in the eyes of the court.

How do you know when it’s legal to get physical with an adversary? Learn the AOJP (Ability, Opportunity, Jeopardy, and Preclusion) principle. If all four of these criteria are all met, you have a good case for taking action. If one or more of these conditions are absent, you’re on shaky legal ground. These guidelines are useful and easy to remember in the heat of the moment on the street.

Ability means that an attacker has both the physical as well as practical ability to seriously injure, maim, or kill you. A small child with a baseball bat does not have the same ability to cause harm as a professional ball player swinging the same hunk of wood as a weapon.

Your life and well-being must be in clear and present danger before you can legally respond with physical force. Opportunity relates not only to the attacker and the weapon, but also to the environment. A physical barrier such as a chain link fence may protect you from a knife-wielder, but not an assailant armed with a gun.

Even when the ability, opportunity, and jeopardy criteria are satisfied, you must still have no other safe alternatives other than physical force before engaging an opponent in combat. If you can retreat without further endangering yourself, this criterion has not been met. After all, it is impossible for the other guy to hurt you if you’re not there.

Clearly you should never let fear of legal repercussions keep you from defending yourself when your life is on the line, but a clear understanding of the law can help you make good decisions on “that day” should it ever arrive.