Embryonic Breathing | YMAA
Skip to main content
FREE Shipping Order Over $70. (US Only, Conditions apply)    |   Up to 40% Off. Exclusions apply. 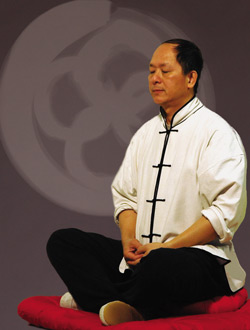 In China, meditation has existed in almost every level of society. In Chinese medical and scholar societies, meditation is commonly called "Jing Zuo" which means "sit quietly."

In China, meditation has existed in almost every level of society. In Chinese medical and scholar societies, meditation is commonly called "Jing Zuo" which means "sit quietly." In these societies, meditation is used to search for ways to bring the mind to a peaceful, neutral, harmonious, and calm state. If we are able to neutralize the imbalance of the emotional mind, we will be able to remove the causes of sickness and human emotional pain. Therefore, this kind of meditation has also commonly been considered as laymen meditation. Naturally, it remains at the level of regulating the mind. The level of regulating the Spirit (Shen) is not actively pursued.

However, meditation in Chinese martial society, focuses not only on regulating the emotional mind, but also on pursuing the meaning of life, and the way to raise up the Spirit. When the Spirit is raised, the Qi (bioelectricity) can be effectively led to the physical body for power manifestation (Yang manifestation). When the meaning of life is pondered and comprehended during meditation, a peaceful and calm mind can be achieved (Yin calmness). From this Yin and Yang balance, a martial artist will be able to reach a deep martial skill and also profound understanding of harmony and peace. Here, I would like to point out an important fact: since most of the well known Chinese martial styles such as Shaolin, Taiji, Wudang, Emei, Tianshan, Qingcheng and Kunlun were all developed in religious monasteries, the meditation methods in these styles are heavily influenced by religious meditation. In many ways, they cannot even be separated.

The final goal of religious meditation is pursuing enlightenment (Daoism) or the Buddhahood (Buddhism). Religious meditation has been recognized as the highest level of meditation in Chinese society. The monks are not only searching for the peaceful and harmonious mind by neutralizing their Emotional Mind, but also aiming for the unification of the human and the nature spirit. In order to reach this goal, the Qi storage in the Real Lower Dan Tian (human bio-battery) must be abundant. When this happens, the abundant Qi can then be used to serve two purposes: strengthen the physical body and nourish the brain to an enlightened state. When the physical body is strong, physical life will be long and will allow you to have a longer time for spiritual cultivation. When the brain is nourished to a higher level, the Third Eye will be re-opened. Then our spirit and the natural spirit will be reunited and the meaning of life will be understood.

From the above, you can see that different societies aim for different purposes. When you train meditation, first ask yourself: What are the purposes of my meditation training? For a peaceful mind? For martial arts? Or for enlightenment? Then, second, you must ask, how do I reach the goal? How do I find the correct way? How much commitment do I have? Do I have enough patience, perseverance, and a strong will to pursue my goal?

If you are interested in spiritual cultivation through Internal Elixir Qigong practice, the first step is learning Embryonic Breathing. From correct Embryonic Breathing, you will be able to find your spiritual center and Qi center. Later, you will unify the Spirit and the Qi at the Lower Dan Tian and reach the state of "Embracing Singularity". This is the state of "Wuji", no extremity.

From Embryonic Breathing, the Qi can be built up and stored at the Lower Dan Tian to an abundant level. This is the crucial key to Muscle/Tendon Changing and Marrow/Brain Washing (Iron Shirt) Qigong practice. To reach the goal of Muscle/Tendon Changing, you must learn Small Circulation meditation. The purpose of the Small Circulation is for the mind to lead the Qi to circulate smoothly and abundantly in the two major Qi vessels: Conception and Governing Vessels. Then the Qi circulating in the twelve primary Qi channels will also be smooth and abundant, and your physical body will become conditioned and healthy.

To reach the goal of spiritual enlightenment, you must learn Brain Washing Grand Circulation. This is to lead the Qi from the Real Lower Dan Tian through the Thrusting Vessel (spinal column) to the brain to activate more brain cells and energize them to a higher vital state. When this happens, the Third Eye can be re-opened. This is the state of "enlightenment."

Embryonic Breathing is only the first step of reaching this goal. Once you have established a habit for your meditation, soon you will realize that you are dancing in a spiritual garden which is hard to describe to other people.

This subject is explored in the book "Qigong Meditation: Embryonic Breathing". 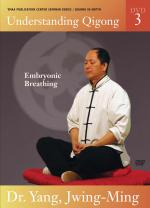