Two Keys for Regulating Your Breathing and Circulating Qi | YMAA
Skip to main content
Free Shipping (US Only, Min. $70+ Conditions apply)    |   20% Off Everything, Some Exclusions Apply. 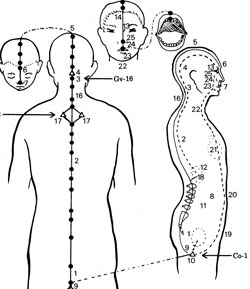 Two Keys for Regulating Your Breathing and Circulating Qi

Two Keys for Regulating Your Breathing and Circulating Qi for health and internal training.

The keys to regulating the breathing and transporting Qi (energy) are in two places: the Huiyin cavity located between the genitals and anus, and the palate of the mouth. The Huiyin cavity is the connecting point of the four Yin Qi vessels and is the controlling and releasing gate for the four Yin Qi reservoirs. When the Huiyin is pushed out, the Qi in the Yin vessels is released and when the Huiyin is lifted upward, the Qi in the Yin vessels is contained and condensed. For example, when you laugh out loud, your exhalation is longer than your inhalation, and when you exhale, the Huiyin is pushed out naturally, the entire body's Yang is manifested and the Guardian Qi is strengthened; consequently, the body gets warmer and begins to sweat. Conversely, when you are sad and depressed, the inhalation is longer than the exhalation and when you inhale, the Huiyin is lifted upward naturally, the Marrow Qi is increased and the Guardian Qi is condensed inward, hence the body feels cooler. From these you can see that when you practice Qigong, coordinating the breathing with the Huiyin's lifting and pushing is one pf the key knacks to governing the entire body's Qi status.

In the past, it was common that a master would keep these two secret keys of regulating to himself. These secrets would not be revealed to the student until he/she proved trustworthy. They were not passed down to those disciples who were not loyal and moral.

One of the secret keys is learning how to control the Huiyin (perineum). This place is the controlling gate of the body's Yin and Yang. Huiyin means "meet Yin" in Chinese and is the meeting place of the four Yin vessels: Conception (Ren Mai), Thrusting (Chong Mai), Yin Heel (Yinqiao Mai), and Yin Linking Vessels (Yinwei Mai). When this gate is pushed out, the Qi in these four Yin vessels is released, and when this gate is held up, the Qi in the four Yin vessels is kept in and preserved. Because of this, this gate can control the body's Yin-Yang status. In my personal experience, this place acts as a pump or a piston to a Qi chamber that controls the storage and release of Qi.

The other key is the palate of the mouth. Daoists believe that the palate is the connecting place of the Conception and Governing Vessels. Normally, the palate is not connected to the tip of the tongue and therefore the Qi is stagnant at the throat area for uttering sound. Therefore, due to the stagnation of the Qi, the mouth is dry. The Conception and Governing Vessels are not well connected in the mouth area. However, if you practice your martial art or Qigong without the necessity of making a sound, then you should touch your tongue upward to the palate at all times so as to connect the Conception and Governing Vessels. When this happens, the root of the tongue will generate saliva to moisturize the throat and to calm down the Yang fire, and allow the Qi to be transported between these two main Qi Vessels without stagnation. This is what is called "releasing the heavenly water." This tongue connection is also called "building the magpie bridge" (Da Que Qiao). According to a Chinese story, long ago a Cowherd (Niu Lang) and a Weaving Maid (Zhi Nu) would meet once a year on the seventh day of the seventh moon on a bridge across the Milky Way. The bridge was formed by sympathetic magpies. This story has become a symbol of Yin and Yang's interacting or connecting in Qigong practice. When Yin and Yang meet, then the body can be harmonized.

When the saliva is generated to a comfortable amount, you should swallow it and use the mind to lead it down to the Real Dan Tian. This will help you lead the fire Qi downward to cool down the body.

If those who are learning Taiji can apply the above two keys into their regular natural breathing, then the accomplishment of Taiji Qigong can be achieved within days. At the beginning, it is hard to control your Huiyin's movement smoothly and naturally. In addition, due to the positioning of the tongue, an uncomfortable and tense feeling may be experienced at the root of the tongue. However, after you practice for some time, you will see it will become easier and more comfortable, and your internal practice will be more efficient and beneficial.