Remembering Chojun Miyagi | YMAA
Skip to main content
FREE Shipping Order Over $70. (US Only, Conditions apply)    |   Up to 20% Off. Exclusions apply. 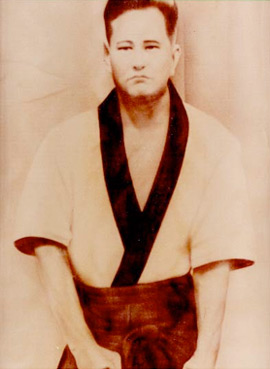 Among the huge number of so-called karate styles in the world these days, all can be traced back to the island of Okinawa, the largest island in the Ryukyu archipelago that stretches from the southern coast of Japan to the northern tip of Taiwan.

Okinawa is the physical and spiritual home of karate. From here the fighting art spread first to Japan and from there to the rest of the world; however, prior to the early years of the twentieth century, karate remained a secret art. Even among the indigenous population it was only heard of in whispered rumors; relatively few people practiced karate on Okinawa and even fewer taught it. Once karate became public, its popularity grew, and today there are said to be fifty million people around the world who regularly participate in some form of karate training, a truly remarkable achievement in less than a century. But what of the pioneers of karate, those early Okinawan teachers who led the art out of the shadows of secrecy and exported it beyond the shores of their island home? Who were these men, and what do we owe them?

One man who was at the forefront of the development of karate was Chojun Miyagi, who was born in the Higashi-machi district of Okinawa on April 25, 1888. His father, Chosho, was the third son of a wealthy shipping merchant. According to the custom of the day the eldest son, Chojun’s uncle Chohatsu, was destined to take over the role as head of the family business; however, when Chohatsu died prematurely without leaving a son of his own, the decision was made to elevate five-year-old Chojun to be the heir. From that time, Chojun was taken to live with Chohatsu’s widow and raised as if he were her own. These events in the early life of Chojun Miyagi are significant to the development of karate for a number of reasons: his personal wealth allowed the young Miyagi time to develop his interest in the martial arts, and later, to pursue that interest beyond the limits imposed by the necessity of having to hold down a job. His wealth also allowed him to care for his sensei, Kanryo Higaonna, when the latter grew old and was unable to support himself financially. After the death of his teacher, Miyagi traveled abroad a number of times to China and Japan; he even spent several months in the Hawaiian Islands during the early 1930s. He was able to devote his entire adult life researching, and teaching karate.

The war years took a heavy toll on the people of Okinawa. The Okinawans, who had lived in peace and harmony with their neighbors for centuries, paid the heaviest cost for a war they had little to do with starting. The battle for Okinawa began on April 1, 1945, and lasted for three months. During that time the Japanese sent in some 5,000 air sorties against the allied fleet, about 2,000 of them being suicidal kamikaze attacks. After a relentless bombardment of the island from air and sea, the land battle got underway in earnest. It resulted in 50,000 American casualties; the Japanese and Okinawan casualties were more than ten times worse. Chojun Miyagi lived thru all of this, and the loss of a number of his children as well as many close friends affected him deeply; like many Okinawans who survived the carnage, he was never again the same.

Prior to World War II, Miyagi taught karate to a small number of students in his garden. When karate training became public, it moved out of the graveyards and secret locations where it had once been practiced, and teachers began to establish small dojo in their homes. Mostly, this was nothing more than a clearing in the garden where students would gather in the evenings and develop their skills under the watchful eye of their teacher. Moving karate indoors came later as Okinawan martial arts came under the influence of Japanese customs. Because karate spread to the rest of the world largely though the efforts of the Japanese, Western karateka were introduced to the martial art via Japanese styles. Still, arranging karate into styles was a relatively new concept in Okinawan karate and one that, even now, makes more than a few karateka on the island very uncomfortable.

Do not strike others; do not get struck

At the Shinseidokan dojo here in Tasmania, I hold memorial training each April and October to commemorate the life of Chojun Miyagi and to provide the students with an opportunity to remember a man whose ideas on karate we still draw on today. Training takes place over the weekend closest to the date of his birth, April 25, 1888, and his death, October 9, 1953. On both occasions my students and I work our bodies hard, and in the ecstasy of sweat, we remember and show our gratitude to the man who formulated the type of karate we practice today: Goju ryu. This strong and gentle school of karate is a complete system that has a depth few today fully appreciate. In efforts to improve, modernize, or develop their karate, many today mistakenly keep adding to their practice with more and more borrowed techniques and strategies. They do this in the erroneous belief that the more they add the better they become; Chojun Miyagi took a different approach to his karate. His martial art was based on removing what was not needed to secure a successful—safe—outcome. Though the maxim, “Do not strike others, do not get struck,” he taught a type of karate that was in keeping with the core value of all the karate practiced in Okinawa: pacifism. His belief that gentleness is discovered thru an understanding of strength describes the path for today’s students of Goju ryu to follow. As the physical training becomes more and more demanding, those who stick with it find their approach to life becoming mellower. It is a rewarding approach to living a balanced life that is difficult.

During our memorial weekends, the training is long and arduous. Beginning on Friday evening with two hours of hojo undo, the students leave to catch a good night’s sleep before retuning to the dojo in the early hours of Saturday, ready to go again at 5a.m. The darkness of night gives way to the sun and in that gentle slide from night to day, we are reminded of the necessity of opposites and how one permits the other to exist. In our karate we consider it a mistake to meet force with more force; instead we try to capture a person’s energy and direct it to a place where no harm is done. We use gentleness to manipulate strength. It would be a mistake to think this is easily achieved; it certainly is not, but in the learning of such skills we test our resolve to continue, and in doing that we reveal our true nature. After two hours of training we stop for breakfast and exchange our karategi for running shoes and shorts. A seven-and-one-half mile, 12 km, dash around a nearby river gorge is a traditional part of each weekend. As always, I use it as a metaphor for the changing conditions in life that we must meet head-on in order to make progress; the students leave the dojo as a group and must stay together, and I leave one minute later. In places, the path is smooth and even; in others, it is rugged and difficult. There are three good-sized hills that have to be climbed, two of which have signs warning visitors of the severity of the gradient ahead; the hills are long and steep and definitely not easy to climb. Along with the changing conditions underfoot, the relentless switching from downhill to uphill, and the constant need to keep going no matter what is the added pressure of knowing that should I catch up we won’t stop on our return to the dojo, but simply carry on and complete another circuit. During this time students are not allowed to speak; instead they deal with the journey and their thoughts in private. Once again this echoes karate training; for as much as karateka may practice with others, our growth through training is always personal.

Upon our return to the dojo, the rest of the morning is taken up with stretching and examining the basic postures of our karate before stopping for lunch and a much-needed intake of water and food. The final afternoon training runs until 4 p.m., and during this time the focus is on capturing a good feeling for the kata we practice. This is done through repetition of the kata in thin air and an exploration of their hidden strategies in relation to self-protection. This is known more commonly as bunkai, and I consider it a vital element of kata training. I see little reason for practicing kata at all without understanding what they have to offer and why we perform them the way we do. Without this understanding, the kata of karate have little more than aerobic value, which is not something I wish to base my karate on, nor pass on to others. For most, this is where the training comes to a halt for the weekend; but for those who are invited to take part in a promotion test, a return to the dojo the following morning to display their skills and knowledge waits.

It is no small thing to say, “I am a traditional karateka!” for it implies a commitment to a way of life that few have found appealing. The tradition of traditional karate cannot be discovered merely in the preservation and repetition of the physical movements. Instead, it is in the way succeeding generations strive to find value in their training during their own lifetime: to understand karate as those who came before us understood it, and to find a sense of balance in our lives just as others have done in the past. Those who practice Goju ryu, and even those who simply use the name, owe a debt of gratitude to Chojun Miyagi, and we do ourselves a huge disservice by forgetting him. The spirit of Giri (obligation) and Gimu (duty) continue to remain important concepts in the tradition of karate; and at the Shinseidokan dojo I insure they are still observed. The training I have written about here and the observance of the birth and death of Chojun Miyagi is, after all, the very least I can do to preserve the memory of a man who left so much to the world of karate.