Sanchin Kata - Ancient Wisdom | YMAA
Skip to main content
FREE Shipping Order Over $70. (US Only, Conditions apply)    |   Up to 20% Off. Exclusions apply. 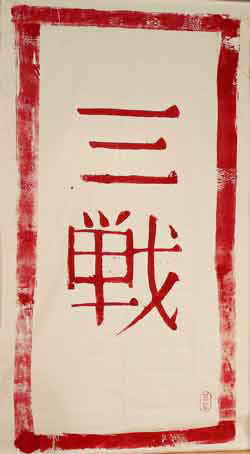 It is only possible to touch upon a handful of points on the timeline with reasonable assurance when looking at the history of sanchin kata. According to the history of the Goju Ryu lineage, Kanryo Higashionna (1853-1915) brought sanchin kata back to Okinawa. That is not to say that sanchin kata had not been introduced to Okinawa before. It simply means the version that Higashionna brought back was taught by him to students who propagated the form by teaching it to others. Around 1918, Kanbun Uechi brought another version of sanchin kata to Okinawa and began teaching what would later be known as Uechi Ryu. As the reader can see, many paths for martial arts, as well as many paths for sanchin kata can be identified. Tracing that history involves a great deal of sifting through a rich mix of history, mythology, legend, and cultural prejudices often indistinguishable from one another. That is why nobody knows for sure about the origins of sanchin kata.

These many paths of course, are a result of change—both deliberate and accidental—to the practice of sanchin kata. Some might argue that in the case of martial arts and its forms, change is bad. On the contrary, the key to the concept of change is context. If change is a result of suiting the needs of the practitioner enacting the change, it may well be credible. However, change can result from mistranslation of a movement, or a misunderstanding of the intent behind a form or an element. While some changes are credible, e.g., are made consciously to suit one’s needs, others are accidental.

Tracing Back the Roots

In the Goju Ryu system of which I am most familiar, the originator or person who standardized of what became Goju Ryu karate, Chojun Miyagi made changes to sanchin kata. Miyagi took the open hands of the form and closed them to fists. Miyagi then took out the turns in the form his instructor Kanryo Higashionna taught to create another version of the kata. Miyagi also changed the breathing taught to him making it more direct and less circulatory in nature. Jigoro Kano, the founder of judo took the principles of the jiu-jitsu he had learned as a young man, removed the crippling techniques, created rules for competition, and emphasized throws. Gichin Funakoshi changed his native karate from an Okinawa tradition into a Japanese way to better suit the needs of the Japanese mainland culture. Morihei Ueshiba created aikido from his experience with jiu-jitsu after an epiphany. Today all of them are cited as masters without question. The list of people changing their art to suit their needs more closely and the needs of their students extends well beyond these examples given. The changes made by these three masters are profound. They were not made without going through a very clear process of gathering the data, analyzing the information, and then making the leap to wisdom.

The book, Five Ancestor Fist Kung-Fu, The Way of Ngo Cho Kun by Alexander L. Cho offers a straightforward path of sanchin kata through the kung fu system, “The kata taught by Miyagi are the sanchin kata and tensho. The sanchin kata of Goju Ryu is notably similar in principles and movements to the sam chien of Ngo Cho Kun. The movements and principles of the tensho kata are also strikingly similar to Ngo Cho Kun, and it seems the similarities are by no means coincidental. Uechi Ryu, another major Okinawan karate style, also bears striking resemblance to Ngo Cho Kun.”

Taijiquan (Tai Chi Chuan), The Grand Ultimate Fist, is often considered one of the three sisters of kung fu: Hsing-I, Baguazhang, and Tai Chi Chuan. Tai Chi is often taught in the western world as a form of health exercise but it is also a devastating martial art when employed in the hands of a knowledgeable practitioner. The very beginning of one Tai Chi segment, “Grasping the Sparrow’s Tail,” looks very similar to the opening of sanchin kata. Ngo Cho Kun, the Five Ancestor Fist Kung-Fu, uses a kata called sam chien, and the similarities between the Okinawan version of sanchin kata and the Chinese version of sam chien are not coincidental. The fact of the matter is that the Okinawan version of sanchin kata, no matter what the school or ryu, derives from forms originating from mainland China.

The work of uncovering, deciphering, and contextualizing historical information is a task that must involved educated speculation where contradictions, limited and unreliable source material and other hurdles exist. The goal is to present probable conclusions where possible, and to raise compelling questions where the truth has been lost to time.

Regardless of which system one chooses, what matters is that certain constants are necessary for success, ‘success’ being defined as:

Regular practice of Sanchin Kata conditions the body, trains correct alignment, and teaches the essential body structure needed for generating power within all of your karate movements. Many karate practitioners believe that Sanchin Kata holds the key to mastering the traditional martial arts. Though it can be one of the simplest forms to learn, it is one of the most difficult to perfect.