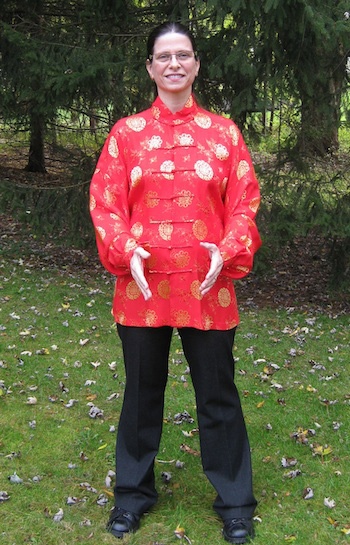 by Lisa B. O'Shea

How is it that the human body can sense energy? Scientifically, we don’t know what qi is. Many people assume it is some kind of electromagnetic wave. Within the body, qi could become an electrochemical phenomenon similar to how nerves transmit impulses chemically through the body.

How is it that the human body can sense energy? Scientifically, we don't know what qi is. Many people assume it is some kind of electromagnetic wave. Within the body, qi could become an electrochemical phenomenon similar to how nerves transmit impulses chemically through the body. What qi is will remain a mystery until it is isolated in a laboratory.

Although we don't know the mechanism, the body can sense qi. Without any training at all, 50 percent of people can feel energy on the first try. If you haven't sensed energy before, try the following technique. If you have already felt energy, do an experiment and ask a group of people that are unfamiliar with qi to try it.

Place your palms facing each other and relax your shoulders. Take a breath and let it go. As you inhale slowly move the palms away from each other. As you exhale bring them back towards each other without touching. Inhale as the hands separate, exhale back. Inhale apart; exhale together. Inhale and exhale as you repeat once more. Now inhale as they separate, and as you exhale, this time slowly bring the hands closer and closer together until you reach a distance where you notice some sensations between the palms. Can you feel any sensations, tingling, pressure, magnetic feeling, or vibration? That sensation is our body's awareness of the qi. Our bodies have a way to sense qi if we relax and tune into it regardless of whether or not we understand how they can sense it.

How do our bodies sense Qi?

When we look at the sky and see that it is blue, it is the retina in our eyes that receive the input and that signal is carried to the brain for interpretation. When we close our eyes and imagine blue, the brain fires signals as well, although we perceive it differently than seeing with our physical eyes. But, when we are asleep and we see a blue sky within our dream, it feels very different than imagining a blue sky and much more "real" than our imagination.

When we are in a dream state we can see colors, feel gravity, feel physical exertion but it is not the nerves from those places in the body that the input is coming from. When we see colors in our dreams, it is not the retina that perceives the input. When we lift something in a dream, it is not the muscles that perceive the weight. Our brain has these sensations stored within it and can insert those perceptions when logic tells us that is required. I believe that our brain also has the ability to translate signals of our perceptions of energy and turn them into physical sensations that our minds can find useful and logical. For example, if energy were abundant in an area, then we might perceive that as hot, deficient as cold, stagnation as sticky or heavy.

I found an article in the August 2007 issue of Scientific American (The Shark's Electric Sense, Page 75), which I think, has implications for understanding how people can sense qi. According to the article, sharks have receptors in their skin that allow them to perceive extremely minuscule amounts of electricity. At close proximity, a shark can sense that a meal is nearby even in murky water by the electrical emanations of the fish. The research to discover and understand how these receptors functioned spanned 330 years. The minute receptors were first discovered in 1678, but it took centuries to uncover their function. It's possible that there could be some kind of receptor in human skin that gives us the ability to feel the qi. These receptors may have already been discovered, but not yet understood, if the shark story is any indication of the length of time involved in deciphering the mysteries of the natural world.

Training the Mind to Sense Qi

As Qigong practitioners, our goal is to sense and control the flow of qi inside the body for health or martial applications. There's an important principle in Qigong that the mind leads the qi. Where the mind goes, the qi follows. What is the connection between the mind and the qi? We know from scientific research that the brain emits waves of electrical activity. Maybe through mental concentration our brain can emit a kind of carrier wave, similar to what radio transmitters use to send information, and the meridians that the qi travels through act like wave-guides for the energy. Again, even though we don't know the mechanisms yet, the principles for training the mind have been practiced for millennia and any practitioner can learn the process. 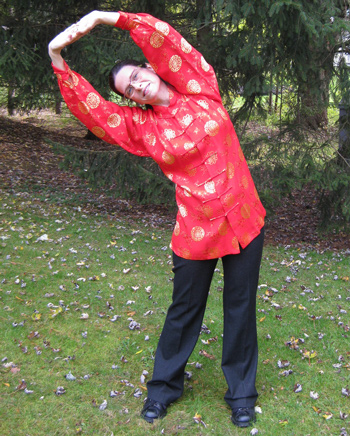 The first-hand technique taught above is the simplest way to create an awareness of qi. Sensing the qi inside the body typically takes more effort to perceive. The following exercise is from a well known traditional set, the Eight Pieces of Brocade. If you focus your attention correctly, the first movement of this set can create a deeper awareness of qi movement inside the body. At the end of each repetition of the exercise, spend a minute guiding your attention deeper into the body as described below.

Inhale and exhale with the hands relaxed and hanging down by the sides of the body. Completely relax the whole body. Feel the tingling in your hands and arms. Some of that is from the blood flow returning to your hands, some of the sensation is from the qi. Use that physical sensation to become aware of the inside of your body. Follow that feeling deeper into your body. See if you can feel tingling up into the shoulders, into your chest, head, and torso, even down to the legs. You might feel the sensations as tingling, warmth, movement, or expansion. Notice all the sensations that you feel.

Repeat the exercise and pause for a few breaths after each repetition and follow the feeling through your whole body. Tune into sensations deep inside your body. Once you are accustomed to feeling the sensations, try to feel them during the movements in the exercise, not just at the end. Work toward sensing the pathways the qi is following within your body. Being able to sense qi inside the body comes through practice. Like taking a wine appreciation course, in the beginning you might not be able to tell the difference between Cabernet and Merlot, but with education and awareness the subtleties can be perceived. Sensing the qi is a crucial step in learning to control its movement to improve health and strengthen the body. The mind and the qi are completely connected. As your inner awareness grows, your ability to guide and control the qi will improve.

Lisa B. O’Shea is a certified YMAA qigong master, a certified qigong therapist with the Chinese Healing Arts Center founded by Master T.K. Shih, and certified in reiki and hypnotherapy. She began study with Dr. Yang, Jwing-Ming in 1997 and was the first of his qigong students to reach instructor-level. Lisa operates the Qigong Institute of Rochester where she offers classes and private qi healing therapy. She travels regularly for seminars on qi healing, Traditional Chinese Medicine, and … More » 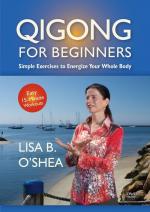 DVD: Qigong for Beginners-Simple Exercises to Energize Your Whole Body 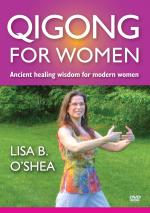 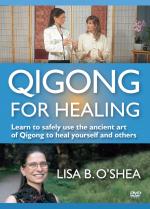