Shin Gi Tai – Karate Training for Body, Mind, and Spirit | YMAA
Skip to main content
FREE Shipping Order Over $70. (US Only, Conditions apply)    |   Up to 50% Off. Exclusions apply. 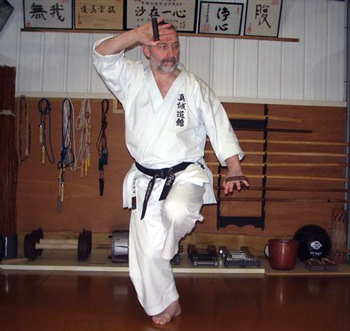 The dojo is a special place, where guts are fostered and superior human natures are bred through the ecstasy of sweating in hard work. The dojo is a sacred place, where the human spirit is polished. -Shoshin Nagamine sensei, Founder of the Matsubayashi ryu karatedo.

A little under a century ago, karate took its first tentative steps beyond the shores of its native homeland, the tiny island of Okinawa; and is now practiced in almost every corner of the world. Still, there are many Okinawans who feel karate today has lost much of its spiritual depth and texture, as well as its lethal effectiveness. The extent and rapidity of karate’s proliferation, and the push toward sporting and commercial considerations, has produced a different kind of karate to that which was found in Okinawa as little as fifty years ago.

Importance of Self in Karate

Inherent in the learning of karate’s physical techniques is the education of your mind, and the revealing, to yourself, of your true nature. Those who find the learning and practice of authentic karate too difficult, and the majority do, fail to grasp the importance of the self. Genuine karate training is about self protection, achieved through self discipline and self discovery. It is not about fighting others, about winning, it’s about the struggle with your ‘self’, and your determination not to lose. As well as efficiency of physical movement, authentic karate brings about clarity of thought and a perception of the world denied those whose mind remains cluttered by dreams of ‘other things’.

As you move ever deeper into the study of real karate, you will discover the need to give more than you take, to listen more than you speak, and to strive for a sense of balance that brings with it a deep and meaningful sense of contentment. From such a place, it is possible to chart a course through life that is peaceful. From a position of strength and confidence you can choose to be humble and considerate, making the world a better place to live for you and those you come into contact with. Is this utopia (?), hardly; just an opportunity to change how you think and interact with those who populate your daily life. If you don’t fight, you never lose, like I said, karate is not about wining a fight; it’s about not losing one…see?

The concept of Shin Gi Tai has long since pointed the way for karateka to make progress. By it’s insistence that the physical techniques of karate are understood through the development of your spirit (character); Shin Gi Tai acts as both a bridge, and a barrier, to those training in karate. Where techniques (Gi) and physical fitness (Tai) show signs of improvement relatively quickly once karate training has begun; your true character or ‘spirit’ (Shin), will inevitably take much longer to reveal it’s self. For many, the cultivation of the body through the techniques of karate is enough, but not for the serious karateka.

To develop as a karateka, you have to take responsibility for your karate. The process begins by looking for a teacher, a sensei, who can guide you toward ways of thinking and behavior that lead you to a better understanding of your ‘self’. Practicing karate with an instructor only provides tuition in the physical techniques of karate: it will do little else. Where a sensei will guide, point, and provide an example to those they teach, an instructor will drill, dictate, and can offer only coaching. Knowing where you want to go in karate, and in life, is important if you are to avoid becoming lost.

In Okinawa, in 1992, I interviewed Shoshin Nagamine sensei, the founder of Matsubayshi Shorin ryu karatedo. In part, our conversation touched on the subject of changes within karate over his life. Nagamine sensei was 84 years old at the time of our meeting, and had practiced karate for 68 years; so as you can imagine, he had seen a lot of changes in that time. He had known the laid-back, relaxed, island life of his youth, as well as the unspeakable horror that befell his homeland when the final act of the Second World War was played out in the fields and on the streets where he had once played as a boy.

He had lived through the occupation years, when America colonized Okinawa in 1945, until handing it back to Japan in 1972; and he had witnessed Naha change from a largely wooden city, made up of low level buildings no more than three stories high, to the sprawling concrete and glass metropolis it is today. When he spoke of karate in his youth, he spoke not only of a different time, but of a different attitude and appreciation for what karate is. And as I sat listening to him, I could not help but wonder when, or how, things had changed. But karate has changed, or at least, what people are looking for from their involvement with it has.

The changes evident in karate, like most changes in society, have not appeared overnight. Slowly, echoing changes in society, karate has shifted away from an individual’s effort to better him self through challenging physical practice and frequent introspection, toward a group activity where importance is placed on external paraphernalia, such as belts, badges, and trophies. Commercialism too, coupled with the sporting mentality of gauging your own success by the failure of others, has altered the way many today engage with karate. Nevertheless, the original karate still exists, and its teachers (sensei) can still be found by any with the patience and humility to approach them in the proper manner.

Sitting in the Kodokan dojo with Nagamine sensei and listening to him speak, I recognized the authority in his words and the wisdom from which they came; for it was a wisdom born of experience. Here is a little of what he had to say on the subject of learning karate…

“In karate we have a principle called Shin Gi Tai. Shin means your spirit, Gi means your technique, and Tai means your body. To do karate well and to understand it properly you have to harmonize these three things within you. Today in karate training there is an over-emphasis on Gi and Tai, the techniques and the body. The Shin, spirit, of a person is often left behind. Technique and power seem to be the reason why some people are doing karate these days, but this was not the case sixty-years ago. Today there is a tendency to forget the building of a student’s spirit and character, but this kind of maturity is very important and I want to emphasize this point.

The development of karate as a sport or business is the reason for this decline. To adopt the principle of Shin throughout your karate training is very hard, and to be successful takes a long time. It is much easier to train your body without the discipline of Shin. Your ability to do karate techniques comes from your body and your knowledge and practice of them, but wisdom comes from your mind, and your heart. Your ability to make the techniques work comes from you feeling for karate, not only your knowledge of it. I would like to see more attention put on education, we must educate students on the importance of achieving a good feeling for karate through the development of Shin.”

Two decades have passed since my conversation with Nagamine sensei took place; still, his words ring true as much today as the day they were first spoken. When karate is passed on to successive generations without concern for the Shin (spirit - character) of the person being taught, the results are predictably poor. Right now, the world is awash with people practicing karate, over forty-million according to the statistics gathered by the Okinawan government. Exactly how many of these people are pursuing karate as it was intended to be pursued is unknown, but I think I am safe when I say the number is far lower; perhaps no more than a hundred thousand world-wide.

Still, what others are doing is not the point, you can not change the world, but you can change your world. So, if you have the will to search for a better way to live and a more purposeful way to practice your karate, and, if you think you have the strength of character to pursue those changes over the course of your life; then maybe my new book Shin Gi Tai, Karate Training for Body, Mind, and Spirit, will help point you in the right direction. At the very least, I hope it will cause you to stop and think about your own relationship with karate.