Sport, Health, and Martial Art: Kyogi, Kenko, and Budo | YMAA
Skip to main content
FREE Shipping Order Over $70. (US Only, Conditions apply)    |   Up to 40% Off. Exclusions apply. 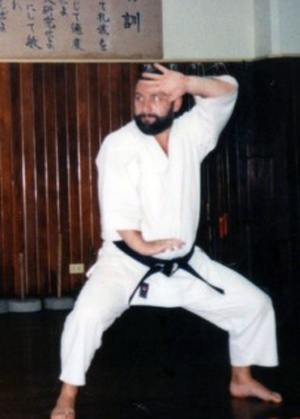 For many people training in karate these days, there seems to be only one way to train … their way! Like other martial arts, karate has not escaped the glare of commercialism, and with that, the packaging and branding of each school, style, or association.

But once you move beyond the marketing of different styles within karate and the different associations and organizations representing each style, you discover there are three distinct types of karateka. They are individuals who are involved in sporting competitions, those who are looking to stay healthy, and a relatively small group of people involved in karate as a form of budo. Wanting something is a start, but to be a tournament champion, live a healthy lifestyle, or to understand yourself more profoundly through the study of budo will take hard work and long hours of dedicated training. Regardless of which approach to karate you adopt, there are no shortcuts to success.

The Karate Road You Travel

If you wish to get past the pedestrian level in anything you do in life and achieve something of value, then it will take hard work and it will take time. There simply are no fast-track methods and no easy options. The world of karate is large enough to accommodate all who want to visit, but it caters poorly to those who expect instant gratification. Some visitors will stay longer and explore more than others, but that’s okay. What each person experiences is up to him. Metaphorically speaking, you can either hire a car or take a cab. But a word of warning here: while the distance between the driver’s seat and the passenger’s seat may seem small, the difference in the journey you experience, depending on the seat you choose, is massive.

The road you travel may be the same and the view out the window may look similar, but the seat you occupy will dictate your personal experience, making your journey a totally altered one. In the passenger seat, you relax and let the driver make all the decisions about speed, direction, and even your personal safety. As much as it looks like you are having the same journey as the driver, you are not! But that’s okay because you trust the driver … right? Wrong! If you wish to chart your own destiny in life, you must assume responsibility for it. In karate, you may well train under the guidance of your teacher, but you should never relinquish the responsibility for learning karate to anyone else; that remains yours—always.

So, choose carefully which metaphorical seat you want to occupy before your journey begins because it’s difficult to change once the journey gets started. Within traditional karate there are three distinct approaches to training: kyogi, kenko, and budo. Each approach has its benefits and each its drawbacks. I will draw on my own experiences with the different approaches of training. Although my preference for the traditional Okinawan way of training is clear, it would be a mistake to assume I favor a similar approach to karate training for everyone. We must all make, and then walk, our own path.

My own experience of kyogi karate—sport karate—stems from the time I spent as a representative of English Shukokai karate, throughout 1976 and 1977. During that time I took part in competitions all over England and Europe, and even though I never placed higher as an individual than the quarterfinals, I was lucky enough to be on quite a few winning teams. Being a part of the Shukokai national squad within the Shukokai World Karate Union opened doors to European tournaments. I was never a great competition fighter, but I have certainly taken part in enough national squad training sessions and senior level competitions to have an insight into the mindset and physical training of those who pursue this type of karate.

Kenko Karate for Your Health

Kenko karate—karate training to maintain good health—has served me well on a number of occasions, most notably in 1982 when I was diagnosed with Legionnaires disease and was for a time very close to death, and again most recently in March 2009 when a lung infection developed into full-blown pneumonia. As your age advances and your body is no longer able to cope with the demands your once-youthful physique dealt with so easily, this approach to karate can have lasting benefits well into old age.  As I have now reached my mid-fifties, kenko karate is beginning to appear larger upon my horizon. Soon it will be time for me to begin implementing a training regimen allowing me to continue my karate until I die.

I would say it all depends on what you are looking for from your involvement with karate. All karateka need to check that the kind of karate they think they are practicing is in reality the type of karate they are practicing. You need to take ownership for the choices you make and the people you become involved with. Many karate students in commercial clubs train for no more than an hour or so once or twice a week, and at that rate, it could take until Halley’s Comet returns before they grasp anything of value from their training.

Kyogi karate has many inherent weaknesses, but before I look at them, I want to highlight a few of its strengths. The most obvious positives include the high level of aerobic fitness and physical flexibility it brings to those who pursue it seriously. It encourages dedication to training and a high work rate over a prolonged period of time. All things being equal, it rewards hard work and effort, and in team events encourages comradeship. None of these things should be dismissed as unimportant.

I would argue strongly that if handled correctly a young person’s involvement in sport of any kind will have a very positive effect on his personal growth and future life. For those involved in kyogi karate these attributes, along with winning of course, form the backbone of their involvement and provide justification to keep training the way they do.

Indeed, who could argue against the self-confidence gained from being able to walk in front of a large and often excited crowd and perform well in either kumite or kata. That such positive effects can come out of your involvement in sport (any sport) should never be in doubt, but what has any of this to do with karate? I would say very little, and here’s why: because it is not just the physical mimicking of karate techniques that make karate what it is, but the mindset that underpins the movements we make, and why we make them.

It is possible for a good dancer to look better than a competition kata performer if you put both of them in a gi and get them to move around. Tom Cruise looked great in the movie “The Last Samurai,” but hopefully no one would seriously argue he had grasped the use of the Japanese sword in the same way as a long-term devotee of kendo or iaido has. It’s not the look of karate that gives it depth and therefore its value, but the way continual training over many years slowly reveals your true nature. In reality, what makes karate work is not the techniques but the mentality of the person using them. I walked away from kyogi karate in the early 1980s for a number of reasons, none of which had to do with getting older or no longer being a champion. I was only in my twenties when my dissatisfaction set in, and, as I was never a champion it wasn’t as if I was in decline from some lofty place of success.

My departure was due to a growing appreciation of the negativity surrounding this approach to karate, and the way the achievement of my personal success depended on the defeat of others. When I won, it was always at someone else’s expense. It fed my ego well, and perhaps this is sport karate’s biggest draw card, but ultimately I found it shallow and pointless: pardon the pun. The mindset (attitude) necessary to make karate work as a method of self-protection cannot be used in competition nor packaged into a sporting contest with all its rules and conditions, and in this basic understanding lies the limitations of kyogi karate.

By their very nature, all sports have a single aim, to win! The Olympic ideal stating, “It is not the winning that is important, but one’s participation” sounds wonderful. However, the vast amount of cheating exposed throughout the games’ modern history, from the athletes themselves through to the judges and officials, clearly shows this particular Olympic ideal is in reality given scant consideration by many within the Olympic movement. For those athletes who work hard and make a great sacrifice over many years to represent their nation on the world stage, adhering to the rules and spirit of their sport, it must be disheartening, to say the least, to learn, once the games are over, that they were relegated to the list of ‘also rans’ by individuals who, intent on winning at all costs, cheated.

You need look no further than Vyv Simson and Andrew Jennings’ book Dishonored Games: Corruption, Money & Greed at the Olympics to discover the astonishing reality of ‘The Games’; it makes for interesting but discouraging reading. Participation in any sport at an elite level has a limited shelf life and those who pursue it, a kind of built in sell-by date. Once a certain age is reached then you either stop altogether or continue with the same activity in a different, less intense way.