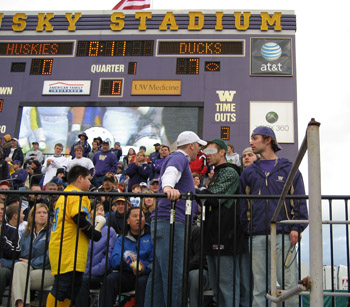 In more than twenty years of working stadium security I have witnessed, interceded in, stopped, or prevented well over 300 fights. Yet in all that time I have only been sucker-punched once. I didn’t like it much, but obviously I’ve managed to avoid repeating that mistake by taking it upon myself to pay close attention and learn from the behavior that precedes violence.

Lawrence A. Kane supervises employees who provide security and oversee fan safety during college and professional football games at a Pac-10 stadium near Seattle, Washington. This job has given him a unique opportunity to appreciate violence in all forms. Along with his crew, he has witnessed, interceded in, stopped, or prevented hundreds of fights. He has also worked closely with the campus police and state patrol officers who are assigned to the stadium. Here is what he says about aggressive behavior as well as the escalation process that precedes violence in crowd control situations.

In more than twenty years of working stadium security I have witnessed, interceded in, stopped, or prevented well over 300 fights. Yet in all that time I have only been sucker-punched once. I didn’t like it much, but obviously I’ve managed to avoid repeating that mistake by taking it upon myself to pay close attention and learn from the behavior that precedes violence.

While it often seems that way to victims, violence really doesn’t happen in a vacuum. There is always some type of escalation process beforehand. While it may be a long, drawn out confrontation that builds up to the point of attack, it could just as easily appear to be a sudden ambush. In such situations, the escalation may have taken place within the mind of the aggressor. An astute observer can identify and react to cues, such as an adversary’s adrenal twitch, that precedes his attack. Unfortunately if you do not spot these indicators, or tells in common self-defense parlance, you are bound to get hurt.

Spotting an adversary’s tell directly requires that you notice very small physical movements, such as signals of the other guy’s intent to attack. These indicators are often subtle, and easy to miss, particularly when you are distracted or mentally unfocused. For example, the tell might be a slight drop of the shoulder, a tensing of the neck, a flaring of the nostrils, or even a puckering of the lips. On the other hand, changes in an opponent’s energy are much easier to spot then any specific physical sign. Any change of energy should be treated as a danger signal. Here are some examples that you can recognize and act on during a confrontation:

Regrettably, most people are not mentally prepared for sudden violence. Even when sucker-punched, most victims report seeing the blow just before it lands. Those who fail to recognize these signs or wait too long to take action on them can be needlessly hurt or even killed. It does not matter why you are being attacked, simply that you are in danger. Do not deny what is happening, recognize the change of energy that constitutes your adversary’s tell, and respond appropriately to defend yourself. Worry about making sense of the encounter once it is over and you are safe.

Lawrence is the best-selling author of nine books, including a USA Book News Best Books Award finalist, an eLit Book Awards Bronze prize, and two ForeWord Magazine Book of the Year Award finalists. His solo efforts include Surviving Armed Assaults, Martial Arts Instruction, and Blinded by the Night. Working with Kris Wilder he co-wrote The Way of Kata, The Way to Black Belt, How to Win a Fight, Dirty Ground, and The Little Black Book of Violence, and with Rory Miller, Scaling Force. He co-hosts … More »