Taijiquan Yin Yang | YMAA
Skip to main content
FREE Shipping Order Over $70. (US Only, Conditions apply)    |   Up to 20% Off. Exclusions apply. 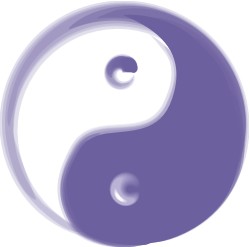 Yin and Yang are opposite (i.e., relative) to each other instead of absolute. That is Yin can become Yang and Yang can change into Yin. Yin and Yang can be exchanged mutually depending on the observer’s Xin and Yi.

Yin and Yang are opposite to each other but not absolute. How Yin or Yang are defined depends on the perspective of the viewer. Often, what is considered Yang by one person can be Yin to another. Moreover, Yin and Yang are exchangeable and this exchange also depends on how you change your viewpoint. You should also remember that the mind is what is called Taiji or Dao in Taijiquan. When Yin and Yang concepts are applied in Taijiquan, Yin can be Yang and Yang can be Yin. Yin can also be Yin and Yang can also be Yang. All of these alternative concepts all depend on your mind and consequently, different strategies are derived. That means an insubstantial action can be a setup for a substantial action and vice versa. If you do not have the options of Yin and Yang exchange, then your strategy will be stagnant and be easily defeated by your opponent.

Generally speaking, Taijiquan’s Yin and Yang can be: closing and opening; defensive and offensive; bending and extending; inhaling and exhaling; retreating and advancing; insubstantial and substantial; small and big; neutralizing and emitting; refined and coarse; leading and attacking; soft and hard; internal and external; Yi and Xin; raising and falling; looking up and looking down; coming and going; enter and exit; withdrawing and releasing; etc. However, (you) should not be fixed in the rules without knowing the mutual exchangeable theory of Yin and Yang. For example, during combat between the opponent and me, bending can be Yang as offensive, and extending can be Yin as defensive. Raising can be Yang as a substantial action and falling can be Yin as an insubstantial movement. Coming can be Yang as emitting and going can be Yin as storing.

You should know that Taiji’s Yin-Yang theory is the foundation and the root of the entire Taijiquan’s creation and development, you should always ponder the theory and its applications. Theory is the scholarship of the art while the actions are the applications of the theory. Only then can you catch the crucial key to Taijiquan’s substantial and insubstantial. Once you are able to apply this Yin-Yang theory into the Taijiquan martial art, you will be able to know the opponent but the opponent will not know you. When you have reached this stage, you have surely understood the applications of Understanding Jin.