Daoist Breathing Improves Pushing Hands | YMAA
Skip to main content
FREE Shipping Order Over $70. (US Only, Conditions apply)    |   Up to 40% Off. Exclusions apply. 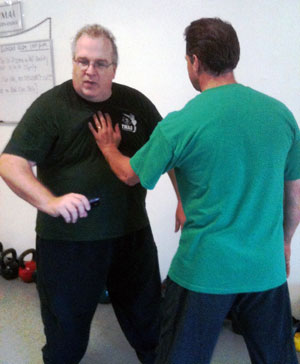 As an instructor at the YMAA School in Boston, Mass., my students often ask, “How can my pushing hands get better?” We all want to get better. Many people spend a lot of time looking for some facet of the art that they have missed or a trick to shorten their path.

As an instructor at the YMAA School in Boston, Mass., my students often ask, “How can my pushing hands get better?”

We all want to get better. Many people spend a lot of time looking for some facet of the art that they have missed or a trick to shorten their path. I think one of the best answers to the question is Daoist breathing.

I suggest that you review Dr. Yang Jwing-Ming’s book, Qigong Meditation—Embryonic Breathing for a more complete explanation.  For additional information, read an article in Fighting Arts magazine by Dr. Yang who states that “Embryonic Breathing is the required practice for those who wish to cultivate the Dao and train their Qi. It can and should be utilized by martial artists of all styles.”

To my students, I pointed out that embryonic breathing was the key element in strengthening the central energy line and improving pushing hands. This in turn led to the following example to describe the effects of using a specific Qigong to help your pushing hands.

When you first start pushing hands, neutralization is a difficult concept. Most of us tend to tighten up when we get pushed. It is a natural response and a difficult one to rewire. We spend a lot of time learning to relax the torso. This rigidity offers myriad connections to the Dan Tian so newbies are easily pushed off balance. A person will move as if their torso is a solid rock. Their entire torso will rotate to neutralize an attack. The spine and chest will appear frozen. Their movement will look much like a door swinging on its hinges. In a person the hinge is the hip of whichever leg is bearing most of the person’s weight, this is the “Stone Tablet Body.”

The next evolution for a practitioner is transforming the stone tablet to a line in the torso that the person moves around. This allows a bit more neutralization and the torso can be described as “softening,” but attacks against this line are very difficult for the individual to deal with and result in the person stiffening their body and actually making neutralization more difficult. The line is analogous with the person’s spine, but is far less flexible than the actual spine. However, this shift from tablet to line is definite improvement and should be encouraged.

One level deeper in building neutralization capability requires that the “line” in the torso get shorter. This shrinking of the line is a nice way to describe the continued softening of the torso. The practitioner is learning to let the chest and spine flex and is developing his connection to the ground known as “root.”

This is a fairly advanced level of development and many people spend a great deal of time here. The goal is to shrink that line and learn softness. The Qi in the body most flow smoothly and circulate throughout the whole body. Your body has to be uniform in its response to the attack and act as a whole, not a staggered group of individual pieces.

Tension or rigidity in any part will be used against you, so relax. We generally think of this integration in terms of movement in the solo form and perhaps in offensive action. It is vital, however, to have this connected quality for defense as well. If you cannot link the entire body together for Yin (defense) and Yang (offense) then you don’t have Taijiquan. The softer and more connected you are; the more energy you can dissipate as well.

The Taiji classics state “Power is generated in the legs, controlled by the waist and manifested in the hands.” It is just as correct to reverse the chain and say that attacking energy is received by the body, re-directed by the waist and channeled into the ground by the legs. When we say shrink the line, we really mean soften the body. So the further we reduce that line the harder it is for an opponent to find our Dan Tian and the easier we can neutralize incoming attacks.

The last level is the trickiest to achieve; the Dan Tian has been condensed to a single point in space. It is considered one dimensional. Now in the real world, we have little experience with such things; you couldn’t even pick up a one dimensional object.

When this stage is reached the person will be supple as silk and hit like a tsunami. Anyone who has condensed the Dan Tian to a single point would be virtually impossible to attack effectively. You wouldn’t find a target to aim at; such a person would be truly formidable. Most likely you wouldn’t even notice such an individual as so accomplished a person would avoid conflict as a side effect of their being. The condensed Dan Tian results from great self-discipline and spiritual growth. It is more than just having six pack abs and strong legs.

Graphically below, I’ve tried to show the stages, which will explain the Dan Tian.

First, one effect of embryonic breathing is condensing the Qi into the Dan Tian.

Secondly, it sets the stage for connecting the Dan Tian with the Third Eye.

In Chinese Qigong and martial arts there are three Dan Tians: the upper, middle, and lower.

Embryonic breathing is part of the process used in linking the Third Eye/Upper Dan Tian to the real/lower Dan Tian through the Thrusting Vessel (Chong Mai). This linkage is referred to as the Water Path (Enlightenment Meditation—Xiao Dao Wu Zhen Jing Zuo).

Importance of the Water Path

The purpose of following the Water Path is to gain spiritual enlightenment by leading Qi from the real Dan Tian through the Thrusting Vessel (Chong Mai, spinal column) to the upper Dan Tian to nourish the spirit.

The side effects of the practice are a calm mind and a stronger relaxed body. (This is how the Qigong enables shrinking the Stone Tablet body to a single line.) The abundance of Qi needed for enlightenment provides extra energy for pushing hands and the stronger relaxed torso allows subtler and better neutralization. (Here the line starts to shrink.)

Another benefit of this Qigong is focus—serious concentration is needed to travel the Water Path. This same focus can be put into Fa Jin practice and more to the point, as the Qi is sunk into the Dan Tian, the process of condensing the Dan Tian down to that single point.

I think there is a lot to be gained from embryonic breathing. The topic is actually too big to cover here and frankly I would just be parroting what Dr. Yang has said in other places. I can say that my own practice of the Water Path has made my pushing hands better. I highly recommend it and embryonic breathing to anyone interested in improving their pushing hands.

Jeff Pratt began his study of Taijiquan at YMAA Boston in 1987 and has reached the rank of Instructor (3rd degree) in the YMAA system. He specializes in Pushing Hands, which is advanced two-person practice in Taijiquan. Jeff is also a disciple of Dr. Yang, Jwing-Ming. He has had extensive training in the spectrum of disciplines comprising YMAA's Taijiquan program.