Ten Precepts of Karate | YMAA
Skip to main content
FREE Shipping Order Over $70. (US Only, Conditions apply)    |   Up to 40% Off. Exclusions apply. 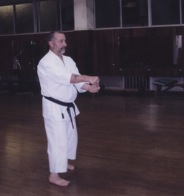 Truths abound. They are all around us like radio waves carrying music through the air; the trick is to discover how to tune into them. For over three and a half decades, I have been guilty of stumbling over more than a few truths.

Men occasionally stumble over the truth, but most of them pick themselves up and hurry off as if nothing happened…
-Sir Winston Churchill

Truths abound. They are all around us like radio waves carrying music through the air; the trick is to discover how to tune into them. For over three and a half decades, I have been guilty of stumbling over more than a few truths and, as Churchill said, hurried off as if nothing had happened.

Now, however, I am less likely to distance myself so quickly when I stumble. Taking ownership and personal responsibility for my karate has taught me to linger when my life reveals an awkward truth; and in doing so, I am able to find something to be grateful for. In times past I not only missed the signpost, but I often missed the turning altogether. Is it any wonder that I became hopelessly lost?

These days I am more accepting of others and myself. Wisdom and truth have been discovered in many places and from many sources, often when I was not looking and so least expected to find them. As this book (Shin Gi Tai) is pointing to the development of the body and mind, through the practice of karate techniques, I want to speak about ten important guidelines. These guidelines have helped steer me to a better appreciation of life, and of karate too.

But even now, I occasionally glance at others and see in them more progress than my own. Still, I gain solace in the knowledge that in budo (term used to describe learning a martial art to help develop a person's character) there is no contest, just an acceptance of the struggle going on inside and of doing your best to deal with it. So here are ten maxims that you may find of value. None of them originated with me, and you may well have come across a number of them before; but in the order I have placed them you may find, just as I did, a route to a better understanding of your life, and your karate.

I would ask only that you ponder each of them for as long as it takes to gain some insight into how, if at all, each relates to you. You may want to take a break from time to time, have a cup of tea, or take the dog for a walk. If you do, you might be surprised at how much clearer your thoughts become.

The concept of "no first attack" in karate has kept karateka bewildered for generations; so what exactly does it mean? For me it points to karate being a defensive art rather than an offensive one. In fact, all the classical kata I practice begin with the premise of being attacked first, and then provide ideas and strategies of how I might best defend myself.

But karate ni sente nashi also speaks to the intention of others. If I perceive an attack is imminent, then, as far as I am concerned, the first move has already been made and I feel justified in reacting with an appropriate physical response. That physical response would, I trust, express the second precept, ki ken tai no ichi, in the blending of my body's movement, the technique(s) I use, and the spirit in which I use them. Dynamic and effective, and always with control, this is how karate should be applied in circumstances where self-protection is necessary.

To witness a well-trained karateka in action is an impressive sight; indeed, he can make personal combat look effortless. So we should be mindful of the third precept, gai ju nai go, and how things done well always look easy, just as techniques that look gentle are capable of unleashing great strength. Thinking about the martial art you practice and how and why you practice it is the beginning of the fourth precept, bunbu ryo do, the way of the martial scholar. Researching the past in order to better understand the present, you are rediscovering the old, making it new once again.

Learn the Depth of Kata

By using your intellect as well as your muscles in the pursuit of personal development, you discover the importance of the fifth precept, ikkyo isshin, and how your heart and mind must be equally engaged in such a quest, while appreciating that the gift of kata, left to us by our predecessors, is there to be studied and not treated like museum pieces to be handled with kid gloves. The sixth precept, kata wa sho toku e no michi tai, clearly reminds you that your progress depends on study, not on clinical preservation. Kata are there to be learned, mastered, dismantled, and rebuilt in the image of the individual making the study, not some long dead master. Knowing this, it is perhaps easier to understand why Okinawan karate schools teach less kata than schools found elsewhere. For the study of kata is continuous and is about developing the depth of your understanding of the kata you practice, rather than your capacity to remember as many as possible.

Learn to Cultivate your Nature

The seventh precept, kyu do mu gen, reminds you of an important distinction with this advice: investigating the way is endless. As time passes those of you who study kata, as opposed to just remembering them, learn to unlock the principles encoded within the patterns. You learn to let go of the rigid form and appreciate more the strategies involved; by doing this you learn the meaning of the eighth precept, butsu kojo no homon, of not becoming too attached to things. When you remove your karate from the box marked "use for fighting only" and separate it from the idea of doing battle with another, you have already begun to cultivate your nature.

Develop Your Own Fate

Appreciating that your training is less about fighting others and more about the mêlée going on within you, you begin to see more clearly the need for the ninth concept, kokoro wo tagayasu, ploughing the spirit. Ploughing the spirit, like ploughing the land, is done in preparation for what is to come. Eventually, if you enter deeply into your investigation of the "way," you will become skilled not only in your martial art, but more importantly, in the art of living; this is why the tenth and last guideline, kai un, is a final aide memoire reminding you to develop your own fate.