The Doctrine of Purpose | YMAA
Skip to main content
FREE Shipping Order Over $70. (US Only, Conditions apply)    |   Up to 40% Off. Exclusions apply.

Home >> Articles >> The Doctrine of Purpose 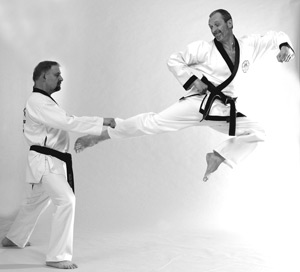 The Doctrine of Purpose

It is widely accepted that martial arts were originally developed as tools of war intended for use by soldiers on the field of battle.

It is widely accepted that martial arts were originally developed as tools of war intended for use by soldiers on the field of battle. By way of example, history tells us that the ancient warrior/monks of China’s Shaolin Temple, the Samurai of Japan, and the Hwarang of Korea practiced empty-hand combat techniques, in conjunction with weapon skills, as a means of effectively conquering their enemies. Yet, with the invention and introduction of gunpowder coupled with advanced armaments, the efficacy of these tactics was brought into question; clearly a speeding bullet offered far greater reach than could the leg or arm.

Venerated masters, true to their art, refused to abandon their hard-earned disciplines in the name of modernity or technical expediency, choosing instead to convey defensive skills tempered by enhanced codes of virtue, using battle-tested tactics as a vehicle. Largely spawned by brutal fighting arts, or justsu whose primary objective was the total annihilation of an adversary at any cost, these martial ways represented sanitized visages of their former combat systems and distinguished themselves from a battle art in that the ultimate goal was not necessarily one of combat preparedness so much as it was a method to achieve personal excellence through disciplined practice. Conventional disciplines such as judo, aikido, karate-do and kendo share this common heritage. Likewise, taekwondo, the Korean martial art and world sport, can today be characterized as just such a system.

While it is true that taekwondo in its infancy proved its effectiveness beyond doubt in the jungles of Vietnam and within the borders of its native land during the Korean Conflict, it is currently practiced by tens of millions of martial artists worldwide as a means to achieve defensive awareness, physical fitness and character enrichment. However, with the element of genuine threat essentially removed, how can the traditional taekwondoist prepare for the exigency likely to surface in the heat of a hostile, corporeal confrontation while enjoying the ancillary benefits of contemporary martial arts practice?

The answer to this dilemma lies in a doctrine of purpose. Taking into consideration the fact that the vast majority of martial artists practicing today are unlikely to experience true military combat, the techniques inherent within the traditional taekwondo curriculum must be practiced with focused, mindful intent if they are to imbue any semblance of defensive value. The successful application of this principle relies on students who are steadfastly willing to accept the vast mosaic that traditional taekwondo represents while riding on the back of an instructor eminently capable of transmitting the requisite skills. These techniques, both mystical and physical in nature, are plentiful and if embraced in their fullness can take a lifetime to absorb.

Contrary to popular belief, particularly in the sport taekwondo community, ki or internal energy development is a critical ingredient in the aforementioned practice of purpose. It is not enough to simply shout from the throat until hoarse in an effort to direct unbridled aggression towards an opponent in a thirst for points and still expect to grasp the mystery of technical amplification through the use of ki. Rather, you must begin with an exploration of the vital life force as recognized in Asian culture for millennia followed by a sincere practice of its acquisition, storage, and distribution by way of the body’s energy centers and network of meridians or ki channels. Once harnessed, ki projection can then be utilized to legitimately magnify intent. In considering the traditional taekwondo syllabus, nowhere is the manifestation of ki more prevalent than in the practice of il su sik daeryun (one-step sparring), ho sin sool (self-defense techniques) and poomsae, hyung or tul practice (formal exercises). Each of these elements provides ample opportunity to express purpose and intent supported by ki. Furthermore, drilling in the above will add a component of reality when practiced with an experienced partner.

While formal exercise training is primarily directed against an imaginary opponent, the taekwondoist should execute predetermined techniques as if an authentic attack is underway. Blocks must remain within the body margin while hand strikes and kicks should exhibit penetrating power. The practitioner’s gaze should express determination or, as author and martial artist Dave Lowery suggests, resonance of mind. Formal patterns contain the words and syllables that compose the sentences of traditional taekwondo. From the initial motion to the segue between movements, there is ample opportunity to apply the doctrine of purpose—show the block, project the strike, and follow through with the joint-lock or sweep. Do not simply step through the motions; that is dance, not martial arts. We must recall that traditional taekwondo is democratic in nature. Consequently, its rewards and virtues are accessible to all regardless of age, gender, or physique. Therefore, rather than approach forms training as an aerobic exercise, surrender to purpose and give the body permission to express its true warrior nature.

The same can be said for the ritualistic practice for il su sik daeryun and ho sin sool. When defending against an attack such as a jab or reverse punch, the practitioner must assume that a block executed with purpose can potentially have the same result as a strike, rendering any additional countermeasure unnecessary. Concurrently, stopping just short of injury when applying a joint lock will illustrate purpose while maintain a margin of safety. Kicking and punching drills, too, must contain an abundant supply of purpose. Simply because a student cannot deliver a round kick to the head region should not label them as incapable of defending themselves. On the contrary, a well-placed in-step round kick to the back of the thigh, practiced with mindful intent, should adequately incapacitate any attacker long enough to ensure escape.

As a professional taekwondo instructor, it is always worthwhile to reflect on the root of your knowledge. I recall the moment when the doctrine of purpose was first revealed to me. In the summer of 1999, during a training excursion to Korea, Grandmaster Richard Chun and I were traveling south to Kyongju by bus along with a sizable contingent of our students. This offered me a wonderful opportunity to sit with my teacher and seek answers to questions we seldom had time to explore back home. After covering the obvious quandaries regarding history and culture, I decided to venture into less familiar territory. At the time I was faced with a dilemma that only someone with his vast experience could conceivably help me with. While the majority of martial arts schools across the nation are composed mainly of children, mine is disproportionately dominated by teens and adults. I wanted to know how I could provide my adult students with a challenging training experience while at the same time maintaining a reasonable and safe level of technical expectation. In retrospect, Grandmaster Chun answered as I suspected and secretly hoped he would.

He first stressed that all practitioners of taekwondo, regardless of age, should exhibit a strong spirit during training. This means, among other things, kihoping (spirit yell) at the proper time, showing respect for seniors, and approaching class with a determined state of mind. He also mentioned that ho sin sool techniques should be performed slowly and with great care so as to avoid any chance of injury. This advice was further tempered by the thought that the mature student should practice extreme caution when attempting to execute aerial, spinning, or jump turning kicks with the possibility, in some cases, of eliminating them altogether in favor of techniques less stressful on the body. These techniques, he intimated, would become less important in the promotion of a practitioner with the advancement of age. He reminded me that prior to sport-sparring, the front, round, and side kicks were the three basic tools of the art. While I saw the value in my grandmaster’s words, I was, admittedly, a little confused. Shouldn’t I be setting a single standard against which all are indiscriminately measured? As an instructor, how could I expect a certain level of proficiency from one segment of my student population while exempting another based solely on age?

“I am not suggesting that you compromise your standards,” said Grandmaster Chun. “I am saying to hold your mature students to a slightly different, yet equally stringent standard. That standard,” he continued, “is the demonstration of purpose defined as action signaled by controlled, mindful martial intent involving little or no contact.” Immediately, a bulb switched on in my head as I became enlightened by my mentor’s train of thought.

Over the ensuing years, I have supported the doctrine of purpose without compromise. This notion lies at the core of my personal training and is bundled deep within the curriculum of my school. Without this vital training element, self-defense drills would mirror those used in aerobic kick-boxing classes and while there is clear value in this type of training, it is not martial arts. By adding purpose to the tools of traditional taekwondo, a significant degree of reality is reintroduced and the mind, body and spirit benefit greatly from its presence.