The Korean Connection: Taekwondo Training in the "Land of the Morning Calm" - Part 1 | YMAA
Skip to main content
FREE Shipping Order Over $70. (US Only, Conditions apply)    |   Up to 20% Off. Exclusions apply.

Home >> Articles >> The Korean Connection: Taekwondo Training in the "Land of the Morning Calm" - Part 1 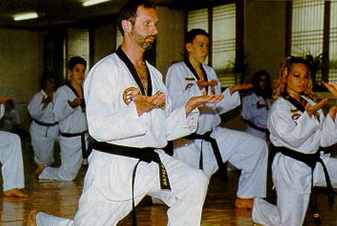 The Korean Connection: Taekwondo Training in the "Land of the Morning Calm" - Part 1

Traditional taekwondo philosophy teaches us to cultivate, among other things, courage, perseverance and indomitable will. Clearly, these virtues go hand in hand with transforming dreams into reality.

Traditional taekwondo philosophy teaches us to cultivate, among other things, courage, perseverance and indomitable will. Clearly, these virtues go hand in hand with transforming dreams into reality; however, it is rare that one can, in fact, claim to have fanned the spark of imagination into a blaze of experience. Nevertheless, this is precisely what a group of my students and I did in the early summer of 2004, when the stirrings of a plan, born one cold, winter evening in January, materialized six months later as we stepped aboard a jetliner bound for the homeland of taekwondo.

In retrospect, our hopes were not unusual; at one time or another almost every martial artist dreams of visiting the country from which their chosen discipline has evolved. To the karateka, that region is Japan; to the gungfu practitioner, it is China. But, to the taekwondoist, it is a peninsula, rich in greenery, the size of Indiana, with mountains masked in swirling mists that rush to meet the sky. This enchanted nation is called Korea: Land of the Morning Calm.

We had just completed a particularly vigorous class and were chatting over refreshments when I mentioned to the small group of students before me that I was planning our school’s tri-annual training and cultural tour to Korea. We would be leaving at the end of June and be staying for seven days. Eyes lit up and nods of commitment circulated around the table. Since I was no stranger to this process, having traveled to Korea before on several occasions, I realized that, at best, one third of those assenting to go that evening would ultimately make the trip; family and financial obligations would act as a filter in the months to come, eventually leaving me with a core group of highly motivated students to chase the dream of training in Asia.

January bowed to February and the cycle of the seasons turned. Emails flew across the net between my dojang in a small, upstate New York farming community and the hustle and bustle of Seoul, South Korea. Already, this journey promised to be radically different from others I had participated in. On previous trips, I had worked closely with various organizing committees who assisted by arranging everything from airfare to training, food and lodging. However, being unfamiliar with the intricacies of international business, many of these organizations self-destructed leaving me with no alternative but to plan this trip myself. As excursion administrator I would have to deal with various agencies and personalities abroad in an effort to solidify our plans in preparation for our June departure. Consequently, in the wake of extensive research, I decided on the services of Darlin Tour System, Inc. as our primary agent in Korea. Ms. Christine Cheong, director of inbound tours, became my contact. Anxious to provide my students with a rewarding training experience, Ms. Cheong and I spent many hours revising and refining detail after detail of our itinerary until, following months of correspondence, I felt we could do no more. Special packets of information I had created were sent out to all participants including our itinerary, a check list containing essential items to bring, suggested reading material, and a letter discussing local customs, proper etiquette and how to behave while traveling in a foreign country. As the snows of winter melted in the warmth of spring and, finally summer, the long awaited day of departure arrived.

It is 5:00pm, Friday, June 27, 2004 and the yellow school bus I had chartered months ago is waiting in a parking lot across from our dojang, motor running, to deliver our group to Kennedy international Airport. It has just begun to rain and we are concerned about the traffic we may encounter coupled with the potential of a flight delay. Family members are snapping photos of us as we pose before the bus in our black Chosun Taekwondo Academy Korea 2004 warm up suits. Amid a flurry of goodbye waves and embraces, we board the bus and begin the first leg of a journey that will cover many thousands of miles. Moods are high as we cross the long span of the George Washington Bridge with an obscured yet breathtaking view of New York City.

Weaving through the narrow streets of Manhattan, our first stop is the headquarters of the United States Taekwondo Association under the direction of my instructor, Grandmaster Richard Chun. Here we meet four students who are joining us on this excursion. Dodging raindrops, we quickly load their luggage and continue on. Traffic on a Friday night in the city is generally congested, but when it rains, that congestion is magnified many times. This night, however, the slick roadways offer less resistance than expected and we arrive at the airport with time to spare. After clearing security, we have a quick bite to eat and move to the gate. The anticipation is palpable as we patiently await the announcement to board. 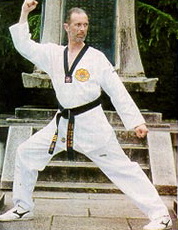 The cabin of the Boeing 747-400 is roomier than expected. For the most part we are all seated together. After stowing our carry-on baggage in the overhead compartments, we buckle in and begin taxing down the tarmac. Then, at 11:50pm, in spite of the inclement weather, Asiana Flight AZ221 grudgingly lifts off the runway right on schedule. I cannot help but feel this is a good omen.

Aside from a quick stop in Anchorage, Alaska for refueling, where we stretch our legs and enjoy a bowl of udon, our flight proceeds without difficulty. Surprisingly, many of us are able to sleep, making the eighteen hour flight completely bearable.

I awaken to the aroma of fresh brewed coffee and a bright voice drifting from the communication system apprising us of our proximity to the mainland. The flight attendant approaches and I choose from the cart she is wheeling a traditional Korean breakfast of fish, rice and kimchi, the ubiquitous side dish of fermented cabbage served with every meal. The spicy, pepper paste I apply to the rice, or bap, whets my appetite for the delicious, healthy food I will be enjoying for the next week.

Before long, I glance out the tiny window to observe a sight I have been longing to see since the inception of our journey on that January night six months ago. To my left is a peninsula of land shrouded in a mist that is brilliantly illuminated by the rays of the morning sun. Excitedly, I rouse my students so that they, too, may share in this moment of splendor. Seeing Korea like this leaves no doubt in the mind why it is pleasantly referred to as “The Land of the Morning Calm.” Before we realize it, our big silver bird gracefully touches down and glides to a terminal marking our final destination and the end of an eight-thousand mile journey. We have arrived: Incheon International Airport, Seoul, South Korea.

After collecting our baggage, clearing customs and exchanging our dollars for won, we make our way to the international arrivals building where our guide for the week, Ms. Angel Choi, is waiting. We are delighted to discover that Ms. Choi speaks fluent English since, in our ignorance, we can only navigate the terms for taekwondo techniques in Korean! Our group has an equal mix of male and female participants and so one of my students and I purchase a rose for each of the women in a gesture of welcome. We hurriedly document the occasion in a photograph and, with bags in tow, proceed to board the motor coach that will serve as our transportation and rolling home for the next few days. In what is the first glimpse of the Korean cityscape for many in our group, we cross the causeway between Incheon and Seoul to the Itaewon Hotel where we will be residing for the duration of our stay.

When we arrive, Ms. Choi checks our group in and hands each of us a meal ticket and room key. We find our accommodations comfortable and, following a quick shower, meet in the hotel lobby to begin a day of sightseeing before our training begins in earnest. Once again, we board our bus and drive to the Blue House, Korea’s presidential office compound similar in nature to our American White House. Security is tight and so we remain for a few short minutes before proceeding on to Kyongbokkung Palace. This magnificent complex of temples, shrines and courtyards, was constructed in 1394 by King T’aejo, founder of the Chosun Kingdom, when he decided to move the seat of government from Kaesong to present-day Seoul. A great majority of its structures were destroyed by Japanese invaders, once in 1592, and again in 1910, leaving only a limited number of the original sites remaining. We stand before Kunjongjon, the main throne hall where coronation ceremonies and other events were held and wonder why the paving stones are so oddly arranged. It is explained to us that they were shrewdly set in such a manner so as to reflect the rays of the afternoon sun into the eyes of enemy troops. Moreover, none are even in height causing visiting emissaries to stand awkwardly before the King and his protectors.

Situated on the palace grounds, is the National Folk Museum where we are fortunate to witness a demonstration of ancient Korean military skill. Martial artists, men and women alike dressed in traditional costume, wield swords, halberds, and fighting staffs or bong, in a display of technical excellence. It is the perfect preface to the events ahead.

Continue reading part 2 of The Korean Connection: Taekwondo Training in the "Land of the Morning Calm