The Meaning of 'Tradition’ in Traditional Karate | YMAA
Skip to main content
FREE Shipping Order Over $70. (US Only, Conditions apply)    |   Up to 20% Off. Exclusions apply.

Home >> Articles >> The Meaning of 'Tradition’ in Traditional Karate 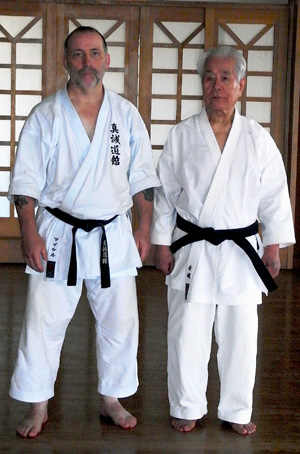 The Meaning of 'Tradition’ in Traditional Karate

Much is written these days about traditional karate, but when it comes right down to it, what exactly is the "tradition"? It takes more than the wearing of a plain, white, karate gi (uniform) to make you a "traditional" karateka. A few bow's here and there and the use of a few Japanese words during training, won't do it either.

I’ve practiced karate almost every day for the past thirty-seven years. It sounds quite impressive when I think about it, but I need to qualify that statement by admitting that I haven’t always been successful in making progress. It takes time to deepen your knowledge and expand your horizons, and the more you learn, the more you come to understand how little you actually know. Dealing with your shortcomings as a karateka, as well as recognizing the failings in your character, is not an easy or pleasant reality to face; but this is part of the “tradition” when it comes to training in karate. Those who don’t have the stomach for traditional karate usually focus their attention on other things, such as tournaments, or opening up a franchise dojo and filling it with paying customers. That’s okay! But neither of these activities represents the “tradition” of karate.

When I think of what being a traditional karateka is like these days, I think less about which kata I train in or which “style” I practice, for in truth, the former is irrelevant and the latter is nothing more than a fairly recent compromise imposed upon traditional karate by the Japanese. It is not the physical aspects of karate training that singles you out as a traditional karateka, but the way you approach your training and how you live your life. If you’re getting these things right, then it truly doesn’t matter how you do your kata, or what kind of patch you wear on your gi. The tradition of karate lies in finding the same feelings for what you’re doing as those who have gone before you found when they breathed the air and walked the earth. Kata and individual techniques of karate are not museum pieces to be polished and admired from a distance like some dead fossil of a once living art. Your karate should be alive, set firmly in the here-and-now, just as it always has been for previous generations. A tradition locked in the past is of little use to those of us living today.

So, how do you connect with that which has gone before us? How do you tap into a traditional way of thinking and training? You could try reading books, but that will only point you toward the things others have accomplished. Sure, it’s a start, but to grasp the tradition of karate for yourself you are going to have to experience it first-hand, and that’s going to take more than reading about the exploits of others in the pages of a book. Traditional karate requires you to develop your own understanding of what you’re doing and why, and discourages you from relying on others to provide you with the answers to the challenges you face.

Like many other karateka who adhere to the Goju-ryu tradition established by the late Okinawan karate master, Chojun Miyagi, I actively seek out opportunities to deepen my understanding of the tradition he left behind, rather than simply broadening my knowledge of it; for knowing of something is of little value to me if I don’t understand it. Sure, I can play around and mimic what I see others doing, but will this be of any use to me when I face a problem that needs solving? For example, having knowledge of electricity and how it works is fine; most of us have this, but would you know what to do if the lights go out? Or, like me, would you be left, literally, in the dark! Traditional karate obliges me to understand what I’m doing, not just knowing about it; and when you look at karate training in this way you begin to realize why the learning of karate can’t be rushed.

One touch away from Chojun Miyagi

Recently I returned to Okinawa once again. Okinawa is a small island mid way between Japan and China that I’ve visited regularly since 1984: it’s the birthplace of karate. Every school of karate in the world today can trace its origins back to this speck of land in the East China Sea, and it was here that men like Kenwa Mabuni (Shito-ryu), Gichin Funakoshi (Shotokan), Kanbun Uechi (Uechi-ryu), and Chojun Miyagi (Goju-ryu) were born, lived, and practiced their karate. From these Okinawan karate sensei, and others of their generation, has come all the karate you see around you, but, how much of the karate you see today remains a part of the traditions established by the men mentioned above is another question. Frankly: not much! At the Jundokan dojo, where I practice karate when I’m in Okinawa, I practice hojo-undo with the actual tools used by Chojun Miyagi. My sensei, the late Eiichi Miyazato, was a student of his, as were a small number of other dojo members. It is from such people that a direct line of transmission is made possible, for when you train with these men, you are only one touch away from Miyagi sensei himself. 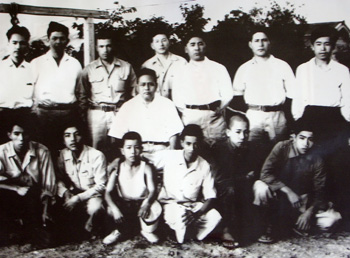 Photo: Miyagi Chojun with Students c1950. Seikichi Kinjo is standing on the back row, extreme right.

Since my sensei’s passing, many senior members of the dojo have gone their own separate ways. It’s a common enough occurrence when a karate master dies, and Okinawa is no different in this respect. One of Miyagi sensei’s students, who I have missed dearly since he left the dojo, is Seikichi Kinjo sensei, a teacher of great skill and enormous humility. Many years ago I foolishly believed I would be taking things easy when he first invited me to exchange technique with him by practicing kakie, a training method similar to the pushing/sticky hand training found in many Chinese martial arts. Making contact with Kinjo sensei I was honestly shocked by the power in the old man standing before me, and it wasn’t long before I had my attitude toward him adjusted quite dramatically. My arms were burning from exhaustion and fatigue, and yet, when the exercise ended, he returned to his normal training as if nothing had happened. Youth versus experience, and once again, my youthful bravado came off second best.

It had been a while since we last met, but on this visit to Okinawa I had the great good fortune of meeting with Kinjo sensei once again. Along with my friends who had traveled from Spain and England to meet with me in Okinawa, we were unbelievably fortunate to receive an invitation from Kinjo sensei to train with him at the Okinawan Budokan, a three-story building given over exclusively to the practice of the martial arts. For almost three hours, my friends and I were taken through junbi undo (preparation exercises), kihon (basic techniques), bunkai (kata applications), and finally the complete list of kata found in the Okinawan Goju-ryu tradition. I have to say, having my kata corrected by a direct student of Chojun Miyagi gave me enormous pleasure, and reminded me of the good fortune I have had over the years to have been in this position so many times before.

With the founding masters of karate’s original “styles” all gone, the best you can hope for now is to train with one or more of their students, although, even this is becoming increasingly more difficult to achieve. Still, if you have the heart to try, you can, like me, even now train with sensei who once touched the hand of your tradition’s founder.