Home >> Articles >> The Race to Nowhere 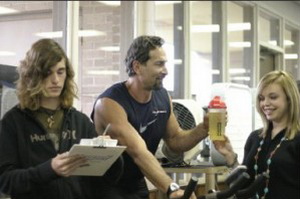 The Race to Nowhere

The New Year has arrived. “What are you committed to?” asks Seabourne. “You might find yourself searching for an answer. Although you may not be preparing for a big race or have any clearly defined fitness goals--or any goals--you are still committed.”

Tom Seabourne may be the greatest athlete you've never heard of before.

How long would it take you to be able to ride an exercise bike for 185 hours?

“If you rode a respectable 30 minutes, four days per week, you'd finish in just under two years or 93 weeks to be exact,” said Tom Seabourne, a noted fitness expert and author who holds a doctorate in Exercise Science. “I would nip you by a mere 92 weeks.”

And just to help keep this impressive set of achievements in context, Seabourne will be making this world record attempt from well within his sixth decade of life! Upon completion of this marathon eight-day non-stop ride, Seabourne will be the holder of the Guinness World Record for riding a stationary bike.

Why This World Record?

It's what Seabourne does. Currently he is the holder of four ultra-distance cycling world records and a top ten finisher in the prestigious Race Across America (RAAM). Seabourne challenges himself to expand his limits and inspire others to embrace fitness, not as an event but a lifestyle.

Seabourne is committed to making an impact in fitness as a professor and role model. He fully understands from the duel perspectives of researcher and athlete that your fitness is quite literally a matter of life or death.

And he is committed to pushing his own limits--to challenging himself and inspiring others. "There is nothing more exciting than challenging yourself with a goal that seems just out of reach,” says Seabourne. “Riding a bike is fun, but pedaling for 185 hours is crazy!"

The New Year has arrived. “What are you committed to?” asks Seabourne. “You might find yourself searching for an answer. Although you may not be preparing for a big race or have any clearly defined fitness goals--or any goals--you are still committed.”

“You see,” he said, “commitment comes in two forms, the noble "hero" stuff we love to talk about and the stuff we not only don't want to talk about, but usually don't even admit to ourselves. And the damn thing is in the absence of a clear, compelling, true north commitment, one that is drawing forth our inner strength, the other commitments, those that keep us down and in a "spin cycle" are in control and driving our lives.”

Seaborne sums it up by stating, “It's really this simple: Either you're consciously committed to having, doing, being more, or you are committed to being stuck to the high-effort, low reward path, repeating yesterday over and over.”

He reminds us that compelling commitments don't have to be astronomical in proportion. You might be committed in a way that rejuvenates and warms your heart rather than stressing you out. You may be committed to staying energized and strong and not starting the year in a deep deficit physically.

It's really all about being clear on your commitments and declaring them.

What are you committed to?

Tom Seabourne, Ph.D. has been a two-time All-American member of the United States Taekwondo Team and a National International AAU Taekwondo Champion. He was an ESPN Professional Karate Association full-contact karate winner, varsity tennis player at Penn State, and a USPTA tennis pro. Dr. Seabourne currently holds 4 ultra-distance cycling World Records. He finished in the top ten in the Race Across America (RAAM). Dr. Seabourne is certified through the American Council on Exercise (ACE), … More »