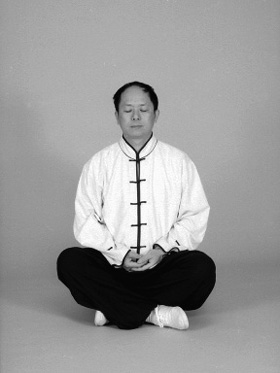 It has been nearly one thousand years since the Eight Pieces of Brocade were created. It does not matter which version you are training, the basic principles and theory are the same, and the goal is consistent. Remember that the most important thing in the training is not the forms themselves, but rather the theory and principle of each form, which constitute the root.

Once you understand these, you will be able to use your Yi (mind) to lead the Qi to circulate and bring you to health. Therefore, when you practice you should try to understand the poetry or the “secret words.” They have been passed down for hundreds of years, and are the root of the practice. Because of cultural and language differences, it is very difficult to translate into English all of the meaning of the Chinese.

Eight Pieces of Brocade is a Wai Dan (external elixir) exercise. It includes both types of Wai Dan Qigong practice theory: not only does it build up Qi in the limbs and then allow this Qi to flow into the organs, but it also uses the motion of the limbs to move the muscles around the organs and increase the Qi circulation there.

There are two sets of The Eight Pieces of Brocade. One set is sitting and the other is standing. The sitting set focuses on exercising the upper limbs, and benefits the six organs which are related to the six Qi channels in the arms. The sitting set is a good way to wake up in the morning, and it is usually practiced before noon. The sitting set is also good for people who are bedridden or cannot stand easily.

You may have noticed that there is very little about coordinating your breathing with the movements. This is simply because the set was designed for the beginning Qigong practitioner. For the beginner, the most important element of the practice is relaxation. Only when you have mastered the set and learned how to regulate your body should you start to coordinate your breath with the movements. The general rule in breathing is that when you extend your limbs you exhale and lead the Qi to the extremities, and when you withdraw your limbs, you inhale and lead the Qi to your spine.

Here are the first three pieces of the sitting eight pieces of brocade.

Practice: Sit with your legs crossed and concentrate on your solar plexus. Your head should feel as if it were suspended, and your chest loose and relaxed. The waist and spine are easy and comfortable. Hold your hands in your lap. Your mouth is closed and the teeth are touching slightly. Regulate your breathing so that it is smooth and uniform. Your mind is clear and pure. Condense your Yi (mind) and Shen (spirit) internally, until the Shen is peaceful and the Qi sinks. Your Yi is on the center Dan Tian (solar plexus). You should meditate at least three to five minutes.

Discussion: Three places are called Dan Tian (field of elixir): the forehead is called the Shang Dan Tian (Upper Dan Tian, ), the solar plexus is the Zhong Dan Tian (Middle Dan Tian, ), and the abdomen is the Xia Dan Tian (Lower Dan Tian, ). The Upper Dan Tian is the residence of Shen (spirit). When the Qi is led to the Upper Dan Tian, the brain is nourished and the spirit can be raised. When the spirit is raised, the Qi circulating in the body can be effectively led by the mind. The Middle Dan Tian is the center where the Post-birth Qi accumulates. Post-birth Qi is obtained mainly from food and air. When Qi in the Middle Dan Tian is stimulated and full, the body is energized. The mind, however, although stimulated to a higher state, is scattered, and you will be troubled by heartburn. The Lower Dan Tian, which is the original source of human life, is the residence of Pre-birth Qi.

This exercise will extinguish any fire in your Middle Dan Tian so that you can concentrate and calm your mind. Before you start any Qigong exercise, you must first be calm. Closing your eyes will keep you from seeing anything distracting which is happening around you, and help you to calm down. You must train yourself to meditate with a deep mind. When you practice, hold your hands in front of your abdomen. Holding them together will help you to keep your mind centered and firm. If you wish, you may regulate your breath for a minute to start calming your mind, but then let go of the regulating and allow your mind to be calm and deep. Concentrate on your Middle Dan Tian to calm down the Post-birth fire Qi. When the fire is gone, place your concentrated mind on your Shen, which is located in the Upper Dan Tian, to increase your energy level.

In China, concentration is called “Ju Jing Hui Shen” (gathering your Jing and meeting with Shen). Jing here does not mean semen or sperm, but rather something which is refined. Here it means the refined and concentrated mind. When the mind meets with Shen (spirit), the Shen will be raised. Whenever your Shen is raised, you will be able to increase the depth of your concentration. 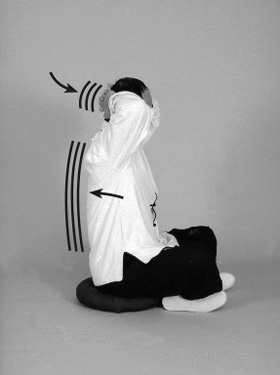 Practice: First tap your teeth together thirty-six times. If there is any saliva generated, swallow it. Then fold your hands together and hold the back of your head. Push your head and body backward while pulling your hands forward. Inhale when tensing, exhale when relaxing. Repeat nine times.

Discussion: There are two major purposes for tapping the teeth together. One purpose is to stimulate the Qi in the gums to strengthen the roots of the teeth. In ancient times, dentists and technology were not as common or advanced as today, and you had to take care of your teeth by yourself. Tapping your teeth together strengthens the roots and helps prevent decay. The other purpose is to clear and wake the mind. When you tap, the vibrations resonate in your brain cavity and stimulate the brain. This will clear the mind.

Kun Lun mountain is one of the highest mountains in China. Here it means your head, which is the highest part of your body. When you push your head backward while pulling your hands forward, also push out your whole back. This will straighten the spine. In addition, this exercise tenses and then relaxes the back muscles, which will increase the Qi circulation there and in the Governing Vessel. This exercise will also strengthen the spine and prevent backache. When you are doing this piece, your breathing should be coordinated with the movement to help the lungs compress and expand. This will release tension in the lungs and increase lung capacity. 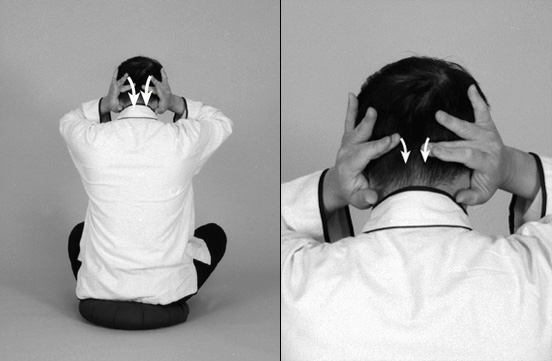 Practice: Continue from the last piece. Cover your ears with your palms, with the middle fingers on the Jade Pillow cavity area (under the external occipital protuberance). Put your index fingers on the middle fingers, and snap them down to hit your head. This will generate a drumming sound in the brain cavity. This exercise is commonly called “Ming Tian Gu” which means “sound the heavenly drum.” Hit twenty-four times in an even, steady beat. You may hit with both fingers at the same time, or else alternate the fingers.

Discussion: The Jade Pillow (Yu Zhen) is the name of a cavity located on the back of your head under the protruding ridge of bone. The heavenly drum means the head. When you do this exercise, do not let your ring and pinkie fingers touch your head, for this will muffle the sound. Concentrate on the sound, and let every beat bring your attention more fully to the vibrations in your skull and brain. Beating the drum clears the mind. When you are finished and take your hands off your ears, you will feel like you just woke up, and everything will seem clear. 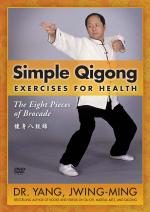